I've reviewed Neisson's younger Élevé Sous Bois expression a few months ago, but I also managed to pick up their older Réserve Spéciale rhum (funny story - I got it for only a hair over $40, rather than the standard $60+, because a liquor store in Washington had it improperly entered into their system as the much cheaper blanc).

Neisson is one of the few AOC rhum agricole producers on the French Caribbean island of Martinique. It is one of the newer distilleries on the island of Maritinque, having been founded in 1932 by Jean and Adrien Neisson. Still under family ownership, it remains the smallest distillery on the island, with an output of only 400,000 liters a year (for scale, Glenfiddich distills roughly 10 million liters of scotch whisky every year). Their rhum is produced from sugarcane grown on their own 40 hectares of land, with all of the cane cut by hand. Juice is extracted mechanically from the cane, then fermented for 72 hours before distillation. The wash is distilled in column stills to ~70% ABV as required by the AOC.

I've gotten conflicting reports of the age of the rhums that are blended together to form the Réserve Spéciale expression. One source has it composed from rhums aged up to ten years. The distiller's website has the age listed as between 50 and 60 months, with an average of 53 months. I'm more inclined to believe the latter, as rhums seem to soak up oak tannins fairly quickly, but this rhum is pleasantly matured rather than over-oaked.

The rhum spends its first six months in 350 liter (not quite double the size of a standard 200 liter bourbon barrel or a bit bigger than a standard 300 liter wine barrique) Limousin oak casks, in the manner of French brandy. After that it is transferred to other oak casks that are no larger than 650 liters (port pipe size). That the rhum spends most of its life in fairly sizable oak containers goes a long way towards explaining the relatively low levels of oak tannins - Neisson seems to be aiming for more oxidation than wood extraction for its rhum. The rhum is finally bottled at 42%, which Neisson suggests is due to a combination of a large angel's share and 'annual topping'. This may mean that they fill up the barrels with understrength rhum or by adding water as the rhum ages. Neither their own web page (they could really stand to hire some better translators) or Google Translate is much help on that front.

Taste: barely sweet up front, a big wash of pepper, strong dry brandy flavors, fruity esters that become bitter going into the finish. After dilution, it becomes flatter overall with some sourness up front, grassy notes emerge along with cacao, which become sweeter over time.

Finish: brandy, pepper, dark berries, and a hint of oak.

I was genuinely surprised by just how much I liked this rhum. Much like the La Favorite Vieux that I reviewed last week, I initially wrote it off as over-oaked. However, now that my palate is a bit more developed, I can recognize it for the berry-fest it is. This rhum has the sweetest nose I've ever encountered outside of a Speyside sherry bomb. It's pure dessert and you're missing out on at least half the fun if you drink this spirit without spending time just smelling it. The taste is a dry in a somewhat disconcerting fashion after the nose, but this isn't particularly surprising - you can't actually smell sweetness, it's all a matter of your brain associating certain smells with sweetness and filling in what it expects to be there. So overall it makes for a very interesting contrast. Once again, I think this is a great pick for someone who enjoys scotch whisky, especially of the sherried variety, to broaden their horizons. The nose will be very friendly and recognizable. The flavors will be a bit more challenging, but worth trying to wrap your head around.

In terms of value, Réserve Spéciale is a bit trickier. It usually runs $60-70 for a liter, which is comparable in price to Clément VSOP, but more expensive than La Favorite Vieux and cheaper than Rhum J.M. VSOP. If you can find it for under $60, I'd say it's worth jumping on. Over that and I think you'll want to give it a try before committing to a whole bottle. But either way, Réserve Spéciale is a great sipper and a worthwhile addition to your collection.

While I've used this rhum in a cocktail before, I wanted to create something new to highlight it. 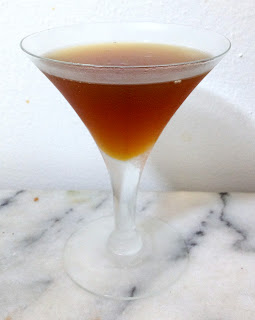 Combine all ingredients, stir with ice for fifteen seconds, then strain into a chilled cocktail glass

The nose is warm, with spices from the falernum and bitters along with a bit of rhum. The sip begins gently, moving into berry/wine sweetness, then fading through the spectrum of bitterness from the vermouths and Angostura, while sharp notes of ginger bounce around. Throughout it all, the rhum undergirds the other flavors, showing more assertiveness on the finish.

I decided to emphasize the more bitter aspects of this rhum with a Perfect Manhattan variation. The vermouths do keep it a bit on point by emphasizing the wine/brandy flavors of the rhum, while taking it in a more bitter direction with the falernum keeping it from getting out of hand. Overall a tasty drink.
Posted by Jordan at 8:54 AM