Inspired by Michael Kravitz's most recent post about tasting an old Rosebank, I decided that it was high time to find out what all the hype was about. Stuart Ramsey declared it to be one the distilleries that he misses the most during his talk at Cocktail Camp. So I took a trip down to the Highland Stillhouse, which has an amazing selection of hard- to impossible-to-find whiskies.

Nose: gobs of fruit and floral notes - almost perfumed, estery, unripe bananas, sour malt, a bit of vanilla, grape juice, a dusting of cocoa powder. After adding a few drops of water, the nose becomes sweeter, with the floral notes dominating the fruit, and more vanilla, which integrates with the malty notes.

Taste: sour malt - becoming sweeter with time, creamy, light grape juice, then pepper and bitter oak near the back. After dilution, the palate becomes much richer and more integrated, with lots of vanilla-tinged malt, and more pepper.

This is an interesting whisky. I found it a bit disappointing at first, as there wasn't a lot of complexity. It also sounds like it might not be the most exemplary offering from the distillery. However, this does have the distinction of being the only whisky I've ever had that was bottled at 40% and got better after adding water. The little bit of dilution really improved the body of the whisky and transformed it into an engaging sort of simplicity. I have a feeling that this probably came from a relatively inactive refill cask, which would explain the almost invisible cask influence. Instead, it seems to be almost all about the malt, mellowed only a little bit by time and oak. 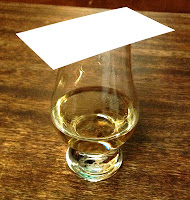 While nearly impossible to find now, this probably would have been a $35-40 whisky when it was originally released, which sounds like an amazing deal in this day and age. I can imagine this being a great whisky to sip on a warm spring day, with breezes blowing the smells of growing vegetation drifting.

Sadly, I didn't get to try the sherry cask Rosebank that was on the Stillhouse's list, as it appears to have been finished off. Hopefully I'll find another some day, but this was an interesting experience - add me to the list of people who wish that Diageo hadn't demolished the distillery.
Posted by Jordan at 7:11 AM