Taste: mild creamy sweetness up front, with a large blast of pepper that continues through, grass, berries, brandy, and bitter oak going into the finish. After adding a few drops of water, the palate becomes rather flat, with only hints of its original features, mostly pared down to grassy bittersweet cane juice.

As a rhum vieux, all of the spirit going into this expression has been aged for at least three years in either French limousin oak barrels or re-charred American oak ex-bourbon barrels. This rhum reminds me of Springbank/Hazelburn scotch whisky, with the mix of berries, vegetation, oak, and salted meat. After first pouring the spirit into the glass, the oak dominates in an unpleasant fashion, but after time it settles down, letting the berry notes take over. The one major flaw I can find is the low bottling proof, which doesn't help the rhum stand up to even minor amounts of dilution. The flavors could also stand to be a little bit bolder - even 43% could give it that extra nudge. That change alone would push this rhum way up the league table for me, as its unique flavor combination is very intriguing. On the upside, the lower proof does make it one of the easiest sippers neat that I've encountered in the world of aged rhums. Additionally, La Favorite Vieux is on the cheaper end of the spectrum at $50 for a liter bottle, which puts it well below comparable offerings from Clément, Saint James, Rhum J.M., or Neisson. 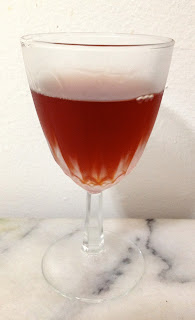 The nose is herbaceous oak with bittersweet cherry and a hint of anise. The sip begins silky smooth, moving through off-dry cherry, to grassy herbs, then dark chocolate and bitter oak tinged with anise. With time as the drink warms up, the smells and flavors become a single chord rather than separate notes.

This is an interesting cocktail. While I set out to buttress the inherent flavors of rhum agricole, this the Chartreuse/Heering combo is almost indistinguishable from the rhum, despite having rather strong flavors of their own. So it's a very 'on point' drink, with the ingredients reinforcing each other, rather than playing counterpoint.