First off, thanks to my reader Florin for a sample of this whisky.

I was quite intrigued by Old Pulteney, especially after their 21 year old was declared 'Best Whisky in the World' by Jim Murray at the end of 2011. Now, I'm not one to ascribe too much weight to awards, but that's some pretty high praise. However, I also heard some pretty good things about their 17 year old expression as well.

Old Pulteney has a history stretching back to 1826 when the distillery was founded on the extreme northeast corner of Scotland (Old Pulteney is the northernmost whisky distillery on the mainland) in the town of Wick. The location is not so peculiar when you consider that the distillery was built at a time when it was far cheaper to ship supplies by water, as good roads did not reach many of the distant parts of Scotland, making it much less remote than it would seem at first glace. The town was also a major center for herring fishing until the mid-20th century, until stocks precipitously declined. The distillery has two very peculiar stills - one where the lyne arm appears to have been chopped off and another with a strangely twisted lyne arm. Additionally, Old Pulteney is one of the few distilleries to still use copper worm-tubs instead of more modern condensers. The distillery passed through a number of different owners before landing in the hands of Inver House in 1995. 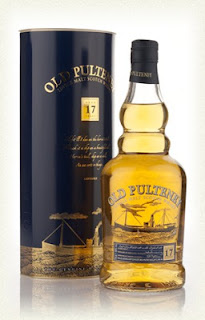 Taste: sweet/sour up front, then malt, wood smoke, and mildly bitter oak tannins, with cacao throughout and some sherry buried under the malt. After dilution, it becomes less sour, but the remaining sourness carries through the palate, there are pepper and floral notes added on top of the wood and chocolate.

This was a very nice, sweet whisky. However, I can't say that I found it to be more than that. I kept looking for more depth, but couldn't quite find it. It reminds me a lot of one of its northern cousins, Glenmorangie Original. The salty maritime notes were a nice addition to that template, but not enough to push it into a higher plane. I was a little bit surprised by the lack of sherry influence, particularly its absence on the nose. The 17 year old is a mixture of whiskies from ex-bourbon and ex-sherry casks, with the sherry casks mostly coming from PX and oloroso sherries. However, there is a significantly greater proportion of bourbon cask whisky in the mix, so the sherry cask whisky may just be too minor of a component to really shine. I will give the distillery some points for bottling this whisky at 46%, especially seeing as the it's also very smooth for its bottling strength, which makes it an easy sipper. At this point I need to try the 12 year old version, which is usually priced fairly competitively, to see if the 17 year old is worth the extra cash.
Posted by Jordan at 8:07 AM