For a number of years now, Laphroaig has been releasing their ten year old cask strength whisky in batches, roughly one a year, since 2009. While nominally forced to do so by the SWA, it has had the added benefit of making them even more popular, as whisky geeks try to hunt down every batch in an effort to see how they are different from each other. We're now up to the sixth release in America, but I'm a little behind the times. Thankfully, unlike Europe, batches don't tend to sell out immediately over here.

Nominally, this is roughly the same whisky that goes into the standard 10 Year, but undiluted and un-chill filtered. Batch 005 was bottled at at pretty hefty 57.2% and was released in February 2013. 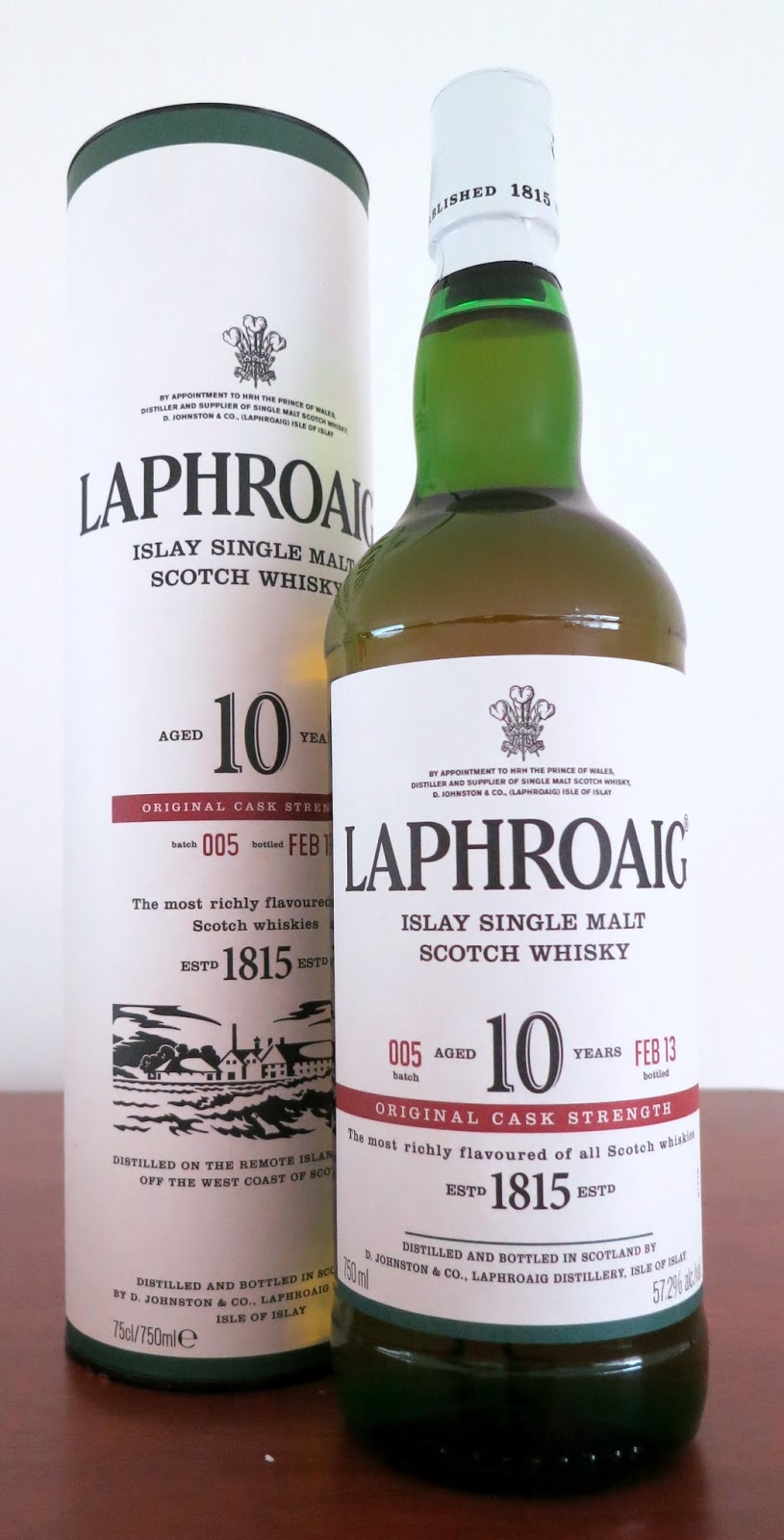 Nose: classic Laphroaig malt character, fresh grain and the earth it was grown in, leafy/mossy peat, vanilla, thick slab of oak, putty, dusty pepper. After adding a few drops of water, the grain becomes fresher and more prominent, the peat becomes more mossy, some sandalwood incense smoke pops out, and it gains an almost buttery quality.

Taste: thick cask strength caramel sweetness throughout, sharp, heavy oak quickly descends on the palate, almost obscuring the peat. After dilution, the palate becomes almost aggressively sweet, the sugars integrate with the oak, the peat almost disappears until the very end, and some bourbon cask berry/fruit notes emerge in the middle.

More than anything else, this feels like an even more amped-up version of Quarter Cask. You have the same basic elements - lots of sweetness, lots of wood, and less peat than you might expect. Laphroaig seems to be shifting towards managing their casks for maximum extraction, which, to me, results in minimal complexity. I will give some points to the nose, but the taste seems like a huge let-down in comparison. After trying the dilutions I made, I also notice that this takes a lot more time to open up at full strength.

Taste:very oak-driven, with wood and malt sweetness up front flowing into polished wood, fruit/berry esters, black pepper, and oak tannins integrated with peat, to give a somewhat astringent character, with a final puff of mossy peat right at the back

This may be my favorite strength. While the wood is starting to dominate, it hasn't obliterated the Laphroaig character like it does undiluted. Additionally, while the flavors and aromas are at a solid level of intensity, the alcohol doesn't make itself too apparent and it opens up more quickly than at full strength. This makes me wish for an NAS Laphroaig at 50% without any fancy casks. Just give it to me raw. 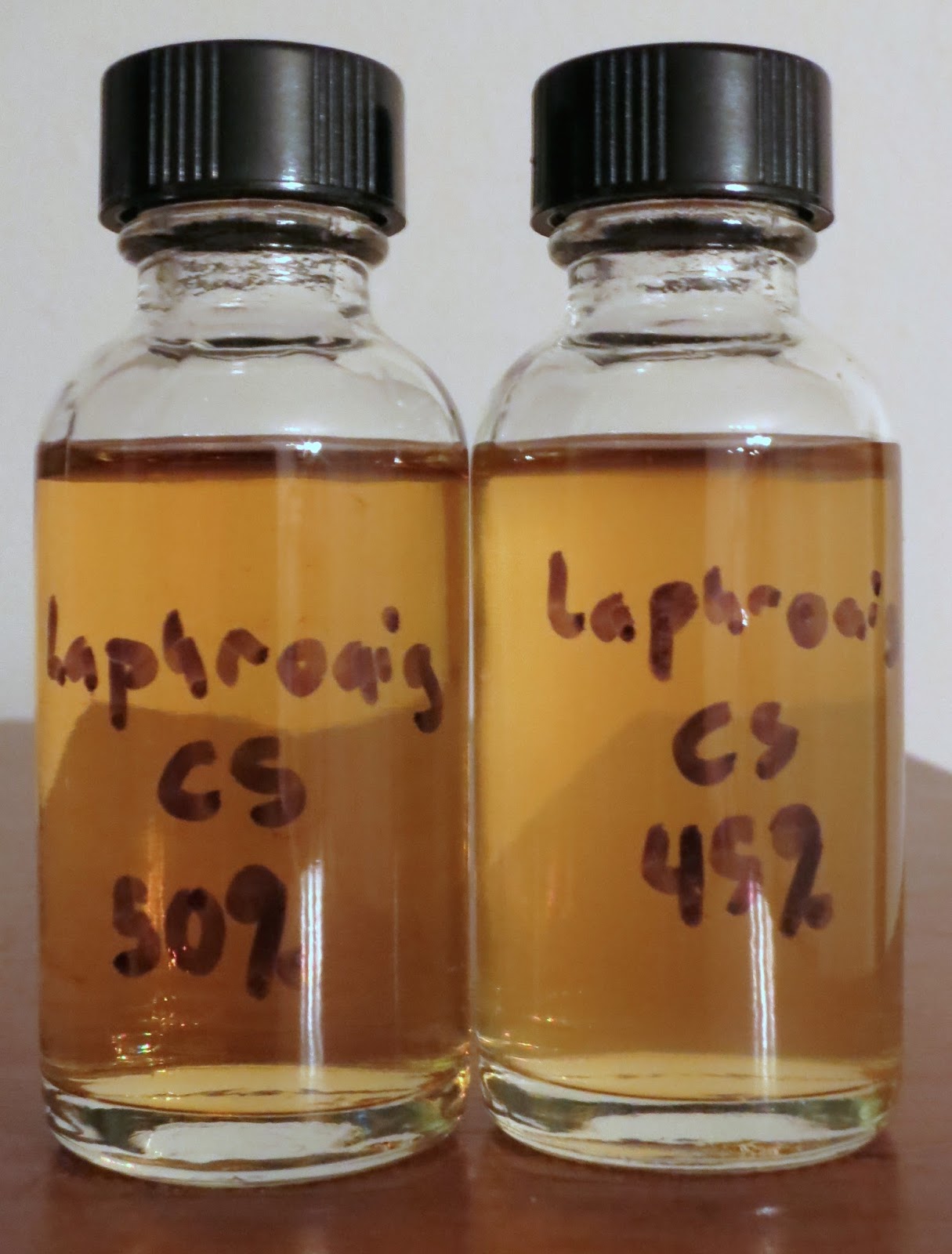 Nose: mossy Laphroaig peat with a touch of ash is much more evident and rides on top of the other aromas, fresh ground malt and bread dough just underneath, with a touch of seashore air and berries, oak is minimal and well-integrated

Taste: clean sweetness dominates up front, with a brief burst of bourbon barrel berry/fruit esters, becoming someone flat in the middle before fading out with fresh malt and mild mossy peat, while the oak and vanilla sit under everything else - adding a layer of richness

This brings the spirit more in line with its reduce 10 Year brethren, though I find it interesting that the taste has less intensity than the standard 10Year at 43%. Though this integrated for several weeks, it still seems a bit watery, though not offensively so. Just goes to show that casks that work well at full strength are not necessarily the same ones that work well when they are reduced.

As a side-note, one thing I noticed after making these dilutions was that the one at 45% was obviously cloudy - there's a good reason the cut-off for non-chill filtered whiskies is usually 46%.

Overall, I have to say that this whisky wasn't what I was hoping for. After reading reviews of earlier batches, it sounded like Cask Strength had minimal cask impact, opting instead to let the unique character of Laphroaig's spirit shine. So this more oak-driven release was something of a disappointment. It's not bad whisky, it's just that it feels like they're trying to cover something up, instead of letting the peat shine. Thankfully it sounds like Batch 006 may have returned to their original formula, so I have hopes that this was an aberration rather than the direction in which Laphroaig is taking all of their whiskies.
Posted by Jordan at 8:33 AM 1 comments

As I noted when reviewing a previous Exclusive Malts Ledaig, it seems like more and more young single malts from the distillery are being bottled.

This particular cask, while of the same vintage (it seems like a lot of the recent Ledaigs have been from 2005) and type (ex-bourbon), is slightly younger and was selected by the Davids at K&L Wines. It was bottled at 57.2% without chill filtration or coloring.

Thanks to Florin for a sample of this whisky.

Taste: restrained malt and wood sweetness up front, fading into earthy cacao, grainy malt, vegetal peat, and bittersweet oak, with light berry esters riding on top over everything. After dilution, the berry esters and malt/wood sweet become more prominent, while the peat becomes more mild, all making it seem less youthful and toning down the alcohol.

This seems significantly better than the Exclusive Malts Ledaig 8 Year/2005 I reviewed a little while ago. There's just enough oak and oxidation to temper the youthfulness without losing too much of the unique qualities of the spirit. With that said, it still doesn't have anything on the Blackadder Ledaig 6 Year I tried - sherry casks seem to be necessary to transform young Ledaig spirit from a curiosity into something magnificent. As is, I feel like this remains no more than a curiosity - if I want a younger Ledaig, I would still turn to the OB 10 Year first as it is much more enjoyable. On the upside, this EM bottling isn't a whole lot more money ($60), which is one of the requirements for picking up something as an education rather than enjoyment (though I'd still try to split it with a few friends or put it in a tasting). As of this post, there are still a number of bottles left, so if this or any other reviews (see Michael, who liked it a lot more, and MAO, who seemed closer to my feelings) make you want to grab some, it's still available.
Posted by Jordan at 8:40 AM 2 comments

This is another one of the single cask releases from the Creative Whisky Company.

Glenrothes is another Speyside distillery that primarily focuses on producing spirit for blends (Cutty Sark has Glenrothes as a major constituent) - only 2% of their output goes into single malts. Ownership is somewhat peculiar - the independent bottler Berry Brothers & Rudd owns the rights to the Glenrothes single malt brand, but the distillery itself remains in the hands of Edrington, owners of the more famous Macallan and Highland Park distilleries.

I've heard very mixed reviews of Glenrothes before - a lot of people actively loathe their single malts, but a few people seem to enjoy them. Sifting through, it seems like sherry casks and age help a lot. Thankfully this particular whisky has both.

This whisky was bottled from a single sherry cask at 52.3% without chill filtration or coloring.

Thanks to Helen at ImpEx Beverages for this sample.

Taste: intermingled sweet malt, honey, and oak up front, slowly fades into more oak in the middle, then sherry finally hits right near the back. After dilution, structure of the palate is flipped - the sherry moves forward and integrates with the oak - producing a sort of vinegar/soy sourness, while the malt hides until the back, the oak has much more pronounced tannic bitterness - which dries out the palate, but that effect is somewhat balanced by more malt sweetness

This is a very nice, but slightly generic Speysider. The sherry provides most of the interest, given the experience structure without overwhelming the malt. I like the way that there is a progression of flavors, rather than having them hit all at once. The fact that the structure significantly rearranges with a bit of water makes it an even more interesting experience.

This one comes down to QPR. The one place I've seen online that appears to have it for a reasonable price is Specs down in Texas. Everywhere else it's $130 and up, which isn't something I could swallow. Closer to $100 I think this would actually be a decent buy.
Posted by Jordan at 7:55 AM 0 comments

While Bowmore was the subject of derision for a number of years due to issues with their distillate in the late-80s and early-90s, there has been a resurgence of interest in recent years as their late-90s and early-2000s distillate becomes mature enough to bottle and the potential of the distillery has been emphasized with growing interest in older bottles like the Black, White, and Gold 1960s-vintage Bowmores. On top of that, recent special releases like The Devil's Casks have sold out in record time, suggesting that even their younger spirit can attract a lot of attention.

What we have here is a refill sherry cask from 2013 that was bottled by The Exclusive Malts at 58.4% without chill filtration or coloring. Let's see how it measures up.

Thanks to Helen at ImpEx Beverages for the sample.

Nose: perfectly balanced peat smoke - right in between ashy, tarry, and vegetal, undergirding oak tannins, subtle sherry influence, crisp/dry Bowmore malt (seriously takes me back to standing on their malt floor), a touch of meaty sulphur, light maritime notes, some of the off wood notes I found in Devil's Casks. After adding a few drops of water, it becomes greener and fresher, with the peat fading slightly and shifting into a wood/fresh peat smoke mode, while the sherry continues to peek around the edges with brighter and lighter character.

Taste: clean malt with restrained sweetness up front, segues into dank sherry, which slides into tar, peat, and cigarette ash, with some almost wine-y oak tannins underneath, resinous pine/cedar right at the back. After dilution, the palate becomes much more tame - the sherry becomes brighter and slides forward over a lot of the malt, while the peat becomes much more restrained and fudge-y, though the odd resinous wood notes at the back now seem more obvious.

This just about makes up for the god-awful 2002/2013 Exclusive Malts Bowmore that I tried earlier this year. This is almost exactly what I want out of a sherried Bowmore: their distinctive malt character, waves of tarry smoke - all barely held together by the sherry influence. The flavors don't beat you about the face like some cask strength whiskies, but they're gripping. This is also much, much better than Bowmore's own Devil's Casks - the sweetness is less unsettling, the sherry is less overt, and the weird wood notes are much less aggressive.

As always, the sticking point is price. The best I've found - and there aren't many places that appear to have any left - is north of $100. Sadly, much like indie Laphroaig, that's just where the market is for Bowmore right now, double if it's from a sherry cask, because the distillery just isn't selling many casks anymore and demand has grown exponentially. But if you're the kind of person who likes Bowmore enough to pay the prices asked for Devil's Casks or Dorus Mor, I think you'll be very, very pleased with this one. I'm tempted, but it's just too far over the odds for me to pull the trigger.
Posted by Jordan at 10:44 AM 0 comments