This drink caught my eye when it was posted by Imbibe. It was originally made by Ryan Fitzgerald of ABV in San Francisco. The set of ingredients and proportions reminded me of the La Bicyclette I posted about earlier this week, albeit it taking them in a rather different direction.

The drink called for a high proof rye and lots of it, but I was curious how the balance of the drink could shift depending on how it was constructed. 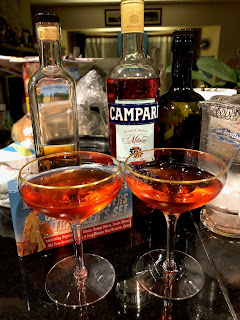 Combine all ingredients, stir with ice for fifteen seconds, then strain into a chilled cocktail coupe and garnish with a strip of orange peel.

The 2 oz whiskey version has a slightly unbalanced nose with the whiskey and Campari notes clashing, with cacao and a little funk behind them. The sip opens with moderate sweetness, then unfolds rye whiskey and cacao bitterness, backed up by the Campari. The finish is pleasantly bitter balanced between the cacao and Campari.

The 1.5 oz whiskey version has a nose dominated by chocolate, with the whiskey and Campari in the background. The sip begins with moderate sweetness, with dark chocolate throughout undergirded by rye and Campari. The finish is bittersweet, again dominated by the chocolate.

This really demonstrates what a potent ingredient crême de cacao can be. Even a half ounce shift in the amount of whiskey is enough to completely alter the balance of the drink. My personal preference is probably somewhere between the two because I find the 2 oz version to be too far towards the rye while the 1.5 oz version lets the cacao dominate. I'd also be curious to try this with another amaro like Bruto Americano with its herbal quality, though a lighter product like Aperol would just get lost in the more strongly flavored ingredients.
Posted by Jordan at 10:03 AM 0 comments

One of the most important things you can learn about cocktails is that they have an internal consistency. Ingredients balance each other in fairly predictable proportions, even if they have to be tweaked for the particular character of individual expressions and personal tastes.

That's how, when asked to make a cocktail using St. Germain, I was able to cobble together almost this exact recipe despite the fact that I had never seen it before, with the exception that I used orange instead of peach bitters. 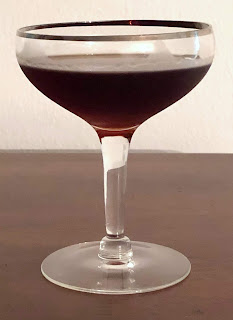 This cocktail comes from a time when St. Germain was the new kid on the block and bartenders were figuring out how to use it. Jaime Boudreau of Canon in Seattle posted a couple of drinks with it, including this one.

Combine all ingredients, stir with ice for fifteen seconds, then strain into a chilled coupe and garnish with a strip of lemon peel.

The nose is balanced between the gin and vermouth, brightened by the lemon peel. The sip opens with liqueur and vermouth sweetness, passes through elderflower and citrus notes, then fades into complex bitterness from the vermouth, gin, and bitters.

This kind of drink is how St. Germain acquired the term 'bartender's catsup'. It does exactly what it is supposed to do, providing a subtle twist on an otherwise classic profile and adding a bit of extra body from the sugar. While it's since slipped out of favor from overuse, it's still a great ingredient to slip into your lineup from time to time.
Posted by Jordan at 7:30 AM 0 comments

I do not have a good history with Talisker's NAS releases. While some of them such as 57º North or their 175th Anniversary Edition have been fêted within the community, their more recent attempts such as Dark Storm were practically undrinkable. So it was with some trepidation that I bought this whisky, saved only by the fact that it wasn't wildly expensive, so it seemed worth the risk on the off chance that I would get another drinkable Talisker. 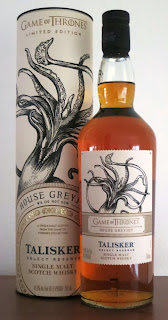 This whisky is aged in indeterminate casks (though I'd put some money on recharred hogsheads being in the mix), then bottled at 45.8% probably with coloring and possibly with chill filtration.

Taste: barrel and malt sweetness beginning up front and continuing all the way through, vague berry fruitiness with floral overtones in the middle. After dilution the oak becomes more tannic and the profile is bittersweet overall.

While this is a more modern Talisker than I would prefer, it's honestly pretty good. The oak is the defining feature, but it doesn't have the unpleasant character of Dark Storm. I liked that some of the floral character that Talisker can have came out and it had a decent amount of peat without being too sharp.

I won't tell you that this is a must-buy bottle, but if you're a Talisker fan and happen to find it at MSRP, I do think it's worth the price. Just don't pay collector's prices unless you're dead set on having a full set.
Posted by Jordan at 7:30 AM 0 comments

Talisker is one of those distilleries that is not exactly easy to find from indie bottlers. Not as impossible as Oban, but not exactly easy. The exception to the rule has been sub 10 year old single casks, which have been trickling out over the last handful of years. Does Diageo require any bottlers who get ahold of their casks to put it on the market it before it becomes competition for their own 10 Year? Or is it just an attempt to cater to the market for youthful, fiery peated malts?

Thanks to Florin for splitting this bottle with me.

Nose: thick savory sherry, dry peat smoke, herbal, vanilla, balsamic vinegar, pineapple, clean malt in the background. After adding a few drops of water it takes on a more youthful cast with the herbal/grassy elements amplified, the sherry pushed into the background, and the peat taking on a fresher/less smoky mode.

Taste: youthful sharpness up front, unfolding into moderately sweet sherry, some heat around the middle, then fading into malt and savory peat with oak in the background at the back. After dilution the sherry becomes more balanced between sweetness and savoriness, the oak spreads out and gives it a bittersweet profile overall,

While I've been confused by all these young Taliskers hitting the market over the last few years, but I have to admit that this one works. The cask is active enough to round off some of the edges, without completely demolishing the spirit and turning it into just another sherry bomb. Reducing this cask to 50% was a good choice as it gives enough intensity to be interesting without the heat being overwhelming.

At the same time, I can imagine putting this together with a bourbon cask or two after another couple of years and coming out with something even better when they've had some more time to develop. Will we see any of those in future? I suspect not given the current trends, but we can hope.

For a very different take on this whisky, see MAO's less than positive review.
Posted by Jordan at 7:30 AM 0 comments