I found this Negroni variation through Cocktail Virgin that piqued my interest. Mezcal, much like peated whisky, can be a difficult ingredient to work with because it is so bold, but the heft of a strong amaro and an equally powerful vermouth in the form of Punt e Mes seemed like they could tame it. 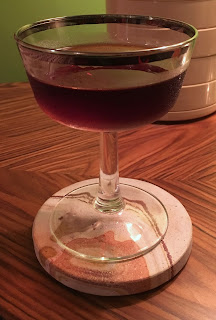 Combine ingredients, stir with ice for 15 seconds, then strain into a chilled cocktail glass and garnish with orange peel.

The nose is dominated by the smoke and plastic from the mezcal, backed up by herbs and mint from the Ramazzotti. The sip opens sweetly with cherry and faint smoke in the background, which becomes stronger towards the back. Herbs and orange peel pop out in the middle. The finish is balanced between the sweet vermouth and plastic-y smoke.

This is a rather peculiar drink. It took a while to grow on my and the plastic notes from the Mezcal Vida continued to through a bit of a wrench in the works. However, the cherry, citrus, and herbal notes provided an excellent counterpoint. I'd be interested to try this again with either a slightly more refined mezcal or possibly a peated whisky in its place.
Posted by Jordan at 8:55 AM 2 comments

While I have a complex relationship with Bruichladdich, there are just enough expressions that I really enjoy to keep me on the lookout for more, however many of them end up being stinkers. So I was pleasantly surprised when The Party Source had a well-aged Bruichladdich at what looked like a killer price (subsequently jacked up significantly). After working my way through a number of other expressions without any kind of fussy cask finishes, this seemed like the next one to try.

This whisky was distilled on November 20th 1992, filled into an ex-bourbon hogshead (probably refill) #3627, and proofed down to 46% without coloring or chill filtration on March 5th 2012 in an outturn of 342 bottles. 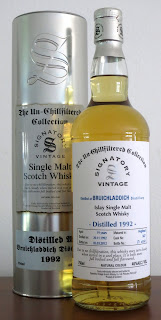 Nose: malty, green, a touch of seashore and vanilla, honey, distant oak. After adding a few drops of water the oak becomes a little more present, some banana and berry notes emerge, and the malt becomes more grainy.

Taste: malt and wood sweetness up front, trademark Bruichladdich salinity with honey and mild bourbon cask fruit esters in the middle, fades out through malt with a touch of bitterness, citrus, vanilla, and oak. After dilution it is largely unchanged, though possibly a little smoother and sweeter.

The best I can say for this whisky is that there's nothing to actively dislike about it. Well, except for the part where I shelled out ~$90 for a whisky that is kind of boring. While I had hoped that Signatory was slipping us a bargain in comparison to OB Bruichladdichs of comparable age - usually double or triple what I paid for this - it appears that they decided to bottle it to catch the Laddie hype with something that wasn't going to get any better if they continued to sit on the cask. Just goes to show that sometimes a deal that seems too good to be true actually is. Unfortunately at the time I bought it the TPS review "It's a great study in malt character, if a bit basic in that regard." hadn't been posted or I might have more wisely given it a miss.

For a slightly different take on this whisky, check out Michael Kravitz's review.
Posted by Jordan at 9:10 AM 0 comments

Bruichladdich 15 Year was part of the first wave of releases after the distillery was reopened by Mark Reynier and Co in the early-2000s. This was a fairly standard set of releases, including a 10 Year and a 17 Year, which were fairly standard combinations of bourbon and sherry casks that had been distilled under the previous regime.

The whisky was bottled at 46% without coloring or chill filtration and released in 2003. This miniature was purchased at the Islay Whisky Shop in 2013 during my trip to Scotland.

Taste: wine-driven, sweet fruit (grape) and honey up front, growing acidic and floral towards the back, grassy/oak bitterness into the finish. After dilution the fruit becomes brighter, there is more citrus and less acidity, plus increased oak tannins.

While I think this is a good whisky, I found it a little hard to find the 'Laddie character underneath the wine. In a lot of ways this is surprising since the first edition was a very sensible mix of bourbon and sherry casks, but it is in keeping with their style at the time.

In an interesting demonstration of the influence of expectations, I originally thought that this was the second rather the first edition, which would have meant that it had a sauternes cask finish rather than the sherry. Lo and behold, I interpreted a lot of the wine notes as sauternes, à la Glenmorangie Nectar d'Or. When I corrected this impression, the wine notes were more clearly sherry. So mistaken beliefs about what you're drinking can radically alter your perceptions.
Posted by Jordan at 7:30 AM 0 comments

Single malts from unnamed or obviously pseudonymous distilleries are one of the great mysteries in the whisky world. Most of the time though a bit of detective work can track down the source. In the case of bottles labeled "Probably Speyside's Finest" or "A Speyside Distillery" the finger usually points towards Glenfarclas, which is one of the few distilleries that normally bars independent bottlers from using their name. This is especially true when the casks are ex-bourbon rather than the ex-sherry that forms their house style, which might give consumers a mistaken impression of their OBs.

This whisky was distilled in December 1992, filled into a bourbon hogshead, then bottled in November 2015 at 48.7% without coloring or chill filtration.

This sample was purchased from the WhiskyBase Shop.

Taste: moderately sweet malt with berry, peach, and citrus notes up front, a little coconut in the middle, fades through light oak tannins through spices (cardamom?) and vanilla malt at the back. After dilution the fruit notes spread across the palate but become less distinct and the oak it muted.

This is a really nice example of an ex-bourbon cask that was filled with quality spirit and allowed to age for a good but not excessive amount of time. It's not flashy, but the nose especially shows some nice flourishes. As currently priced the quality level isn't quite high enough to make me pull the trigger, but if it was about 20% less I might be wiling to bite.
Posted by Jordan at 2:01 PM 0 comments

IB Springbanks, while once a fairly common sight, are becoming thin on the ground as stocks from the 1990s dwindle and many hold back casks for further aging to sell at ever increasing prices. So here is one from yesteryear, a younger port cask from the bottler Alchemist.

The whisky was distilled in December 1995, filled into a mix of first-fill ex-bourbon and first-fill ex-port casks, then vatted and bottled at 46% without coloring or chill filtration in April 2006.

Thanks to Michael Kravitz for splitting this bottle.

Nose: rich but not overwhelming port cask berry/grape, dry malt, savory, sawdust, oak in the background, wood smoke. After adding a few drops of water it becomes softer and the port influence recedes, while the oak and peat smoke gaining ground.

Taste: bittersweet port throughout, oak tannins and dirty peat come in around the middle, becoming more bitter towards the back, clean malt underneath everything. After dilution the structure remains largely unchanged while it becomes softer, except for amplified oak tannins and a sour note near the back.

Port cask whiskies have been extremely hit or miss for me. I've enjoyed a few of them, but most end up being too sweet. While this one didn't excite me too much, it also wasn't bad. The cask influence was present but didn't completely stomp on the spirit, though I could have done with a bit more peat as counterpoint. Where this succeeds I think it does so because it fits one of my preferred methods for adding fortified wine casks to whiskies - the ex-bourbon casks help to restrain its overall influence and give it a more rounded profile.
Posted by Jordan at 7:15 AM 0 comments

This whisky was created largely to capitalize on the popularity of the Prohibition era in the current cocktail world. It has all the hallmarks of the current moment: a round and bartender-friendly 50% ABV, a respectable price point, and a grossly exaggerated story.

So what's actually in here? While no specs have been released, as a blended whisky it's a mix of malt (with what seems like a higher proportion than many) and grain whisky that were in all likelihood mostly ex-bourbon, with possible a few sherry casks in the mix. Given that this is produced by Edrington, the most probable malts come from Glenrothes, Glenturret, Macallan, and Highland Park (probably the source of the peat in the mix). There are good odds that it has been colored with caramel and it may still be chill filtered despite the higher strength.

Taste: slightly bitter oak tannins throughout, citrus peel and citric sourness with dirty/earthy peat beginning around the middle, bitter grain with mild oak near the back. After dilution it becomes much sweeter and the oak tannins are subdued up front, the peat largely disappears into the oak near the back, and the citrus notes are mostly lost.

While this is far from being the best whisky I've ever tasted, it is undeniably a good value. There are not a lot of blended whiskies under $30 in the States right now that I would consider to really be drinkable, but this one is really quite good. The malt content makes itself known and the grain is not overly obtrusive. It has more peat than, say, Chivas Regal, so I think it would hold its own for a Johnnie Walker Black fan. Isle of Skye 8 Year remains my standard in that category, but this is a solid pick if you can't find that in your area. All in all a good effort by Edrington that I'm glad to see on the shelves. Hopefully more companies follow suit in releasing blends at reasonable price points that have more heft than the standard 40% ABV releases.
Posted by Jordan at 9:43 AM 0 comments