Somehow, this is the first Port Charlotte I've ever tried. While I have had the earlier Bruichladdich Peat (and thought it was disgusting), PC has always garnered much more praise. Whether it's the high prices or lack of availability in the States, I've just never gotten around to it before.

So we start at the beginning. This is currently the entry level release in the lineup, produced entirely from Scottish barley, then aged in a mix of American oak ex-bourbon and European oak ex-red wine casks. The whisky is bottled at 50% without coloring or chill filtration.

Nose: dominated by dry peat smoke, fresh herbal notes, a little roasted vegetable savoriness, Bruichladdich malt, pleasant dry oak behind, a touch of caramel, nutmeg and cinnamon, red wine in the background. After adding a few drops of water it remains relatively unchanged, but the peat shifts into more of an herbal mode, meshing with the nutmeg, and something floral starts creeping out.

Taste: everything lands at once and carries through to the back - pleasant malty sweetness, dry peat smoke, an appropriate amount of oak, citrus, and red wine in the background. After dilution the structure remains similar, but it becomes sweeter and the alcohol paradoxically has more heat.

Finish: carries through from the palate with a little more red wine and oak

I want to like this more than I do. The spirit seems good - there's no unpleasant funk, just solid peat smoke and Bruichladdich malt. But given what these NAS bottles go for, there isn't enough complexity to make me choose it over something like Ledaig 10 Year. With that said, I am curious to try the latest Port Charlotte 10 Year or some of the more well-received cask finishes, because I can absolutely believe that it has more potential than this.
Posted by Jordan at 7:30 AM 0 comments

Bruichladdich has been putting out NAS/multi-vintage releases in their trademark blue bottles under the Laddie Classic/Classic Laddie name holding down the lower end of the lineup since 2009. The name was inverted in 2013 when it became part of their Scottish Barley project alongside a more heavily peated Port Charlotte version.

All of these have striven to showcase what the distillery considers to be its core profile - clean malt flavors with some coastal influence. These have all been from American oak casks, though they have been a mix of ex-bourbon, ex-sherry (at least in the early iterations), an ex-red wine. The Scottish Barley releases have all been bottled at 50% without coloring or chill filtration.

Nose: pleasantly mild earthy peat funk, round fresh malt - less youthful than expected, a little bit of red wine and oak in the background. After adding a few drops of water it turns into something like WIPs Kilkerrans with the peat integrating and turning into something like ginger cookies.

Taste: pleasant malt sweetness up front with a little heat and oak underneath, continues in the same vein towards the back where it picks up some light red wine, a bit of gentle peat, and a little more oak. After dilution it becomes more rounded with the red wine tucking into the background while the peat spreads out and integrates, resulting in a much more enjoyable profile.

This continues to gives me hope that Bruichladdich finally has their spirit under control. There's a little bit of their funk at full strength, but it reads closer to the very mild peat of the 12 Year Second Edition than the over the top weirdness of Laddie Ten. Speaking of which, while this is nominally part of their 'unpeated' lineup, this absolutely tastes lightly peated. I have no clue whether that is how they choose to malt the barley for this release or if it is picking up the remnants of their Port Charlotte and Octomore runs from the washbacks and stills, but either way it has similarities to Hazelburns that come off as peated.

I might consider buying more if I could find it around the $40 mark. Especially with water it hits a lot of the notes I look for from Bruichladdich, though it is missing the salinity that would take it up a notch. As it stands this is a competent malt that reminds me of early Kilkerran WIP releases, well-suited for times when you don't want to think too hard about what you're drinking. By the same token there is nothing here to dazzle, but sometimes that's exactly what you're looking for.
Posted by Jordan at 8:08 AM 0 comments

Macallan 12 Year has been a staple for decades, the go-to bottle when looking for a whisky gift that seems classy without going over the top. However it disappeared for a number of years from many markets as the distillery rolled out their NAS 1824 series. Those became exemplars of the era when distillers claimed with straight faces that 'age wasn't everything' while charging customers equal or greater prices.

But it seems like we're finally coming back around, with age dates returning or even increasing for some releases. The Sherry Oak Cask line has returned to its roots with an age statement and 100% sherry seasoned European oak casks, bottled at 43% with chill filtration but probably no coloring. 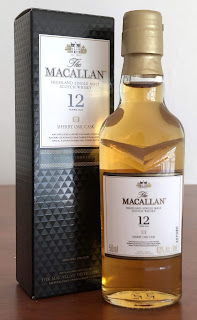 Nose: bright, rich sherry, dried fruit, nutty, vanilla, clean malt, moderate oak. After adding a few drops of water the sherry is less bright and the aromas are generally dampened down, with the exception of the malt becoming stronger.

Taste: sweet, thick sherry starting up front, turning more bittersweet with a little malt-y backing around the middle, slightly sharp oak tannins at the back. After dilution the sherry is more expansive and gains a pleasantly tart edge, and the oak is a little more rounded.

Between this and the Double Cask, I think I prefer the latter. While this is more intensely sherried, the European oak gives it a sharpness that I find a little unpleasant. Overall, it just doesn't feel like a complete package, rather an attempt to make a fairly generic sherried whisky. I would personally prefer more refill sherry casks in the mix to let the spirit shine through, since that might help give it more of a malty roundness to balance the European oak tannins. As is, I would go for its American oak sibling or stick with other distillers making whiskies in this vein such as Glendronach or Glenfarclas.
Posted by Jordan at 8:30 AM 0 comments

The last 10-15 years at Macallan has seen more change than almost any in its existence. Product lines have been released, then disappeared with barely a whisper. A prime example would be their Fine Oak line, which blended European and American oak sherry casks with American oak bourbon casks to give a less aggressively sherried profile. However this was always seen as the 'lesser' Macallan in comparison to their classic Sherry Oak lineup.

Since Fine Oak was taken out of circulation, it has been partially replaced with their (small) Double Cask, which takes a page out of Edrington's other big name distillery Highland Park. While there are no bourbon casks here, they instead use sherry seasoned American oak casks to impart a different profile than the pure European oak sherry casks of their Sherry Oak line.

The final result is bottled at 43% with chill filtration, but probably no coloring. 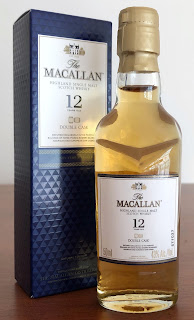 Taste: mildly sweet malt up with sherry overtones, some cardboard in the background throughout, becomes a little more rich with American oak butterscotch and light floral notes beginning in the middle, then a touch of bittersweet oak at the back. After dilution the American oak notes become stronger and the bitterness at the back is amplified, though not unpleasantly.

While not a world-beater, this is a very competent malt. It feels like an interesting twist on the Fine Oak line it replaced, with the American oak still dominating over the sherry. Hazarding a guess the seasoning period for the American oak casks may have been comparatively short, so the wood speaks louder than the sherry. The American oak casks were still well chosen and give it a sweeter, more dessert-y character without going overboard on the tannins.

It feels comparable to something like Aberlour 12 Year, which makes sense given that their composition is similar. Back when Aberlour 12 Year was bottled at 43% I would say there wasn't much contest between the two, but if their prices are similar, I might have to give the nod to Macallan for still being bottled at the higher strength. I also might take it over something like Balvenie Doublewood 12 Year, which has always felt poorly integrated from the short finish compared to blending bourbon and sherry casks together.

Overall this feels somewhat representative of how the market seems to be coming back around after years of mediocre NAS releases. This has an age date, displays casks that are, if not wildly exciting, very respectable, and it doesn't cost the earth (by today's standards). I'm not sure if I need a lot more, but if 200 mL bottles were available for, say, $20, I would happily grab one for the occasional drink.
Posted by Jordan at 8:26 AM 0 comments

Glendronach Parliament has capped their standard lineup since it was refreshed. I initially intended to add it to my earlier review, but neglected it for long enough that the miniature had gone bad by the time I got to it. So I was glad to be able to get a fresher sample from Whiskysite.nl to finally give it some proper attention.

Unlike the younger Revival and Allardice expressions (until the 15 Year's refresh), this included PX casks alongside the more standard oloroso sherry casks. Was that the result of weaker casks being reracked to give them more punch? Or just to sweeten whisky that was getting tannic? The final result was also given a lift by being bottled at 48% instead of 46%, giving it a little more heft, as always without coloring or chill filtration.

Taste: opens with sweet and sour sherry, nutty cherry notes in the middle, bittersweet at the back with sweeter sherry and dry oak tannins. After dilution the flavors come into focus with brighter sherry and darker oak, some fizzy/peppery notes come out from the middle back, and there are some tropical fruit overtones throughout.

While this is clearly older than Allardice, the oak has become a bit too tannic. There is some compensation in complexity, especially on the nose and the flavors with a little dilution (which makes me wonder what this would have been like bottled at 46% to begin with), but the overall results don't grab me, especially given the 50% bump in price. As always, both my wallet and I are perfectly happy to prefer the cheaper whisky.
Posted by Jordan at 7:15 AM 0 comments