Glendronach has gone through a number of changes since the last time I reviewed their core lineup. The 15 Year disappeared for three years due to supply constraints, returning after their warehouses filled up sufficiently. Maybe more importantly, the group that they were a part of with Benriach and Glenglassaugh was sold to Brown-Forman in 2016, removing them as some of the few remaining (major) independent distilleries in Scotland.

But ultimately it's about the whisky. This is aged exclusively in oloroso sherry casks, then bottled at 46% without coloring or chill filtration. According to the math, this whisky is far older than it says on the bottle and will be until new stocks become available next year.

Taste: thick, bittersweet sherry up front with citrus peel in the background, a slightly sour overlay throughout, fades into sweeter sherry with moderately tannic oak at the back. After dilution it becomes softer and sweeter overall, with less oak and more floral malt at the back, and slightly washed out flavors

In all honesty, I feel like Glendronach's spirit is getting a little long in the tooth. This is still almost as good as I remember it, but the oak is starting to get the upper hand in a way that detracts from the spirit. But some of that might just be the effects of packaging this as a sample, so I'm still seriously thinking about grabbing a few bottles before the reset next year. The reviews of the rebooted Glendronach Revival make me suspicious that the new spirit won't measure up to what was made with old stocks, especially if they decide to throw PX sherry casks into the mix to give the product extra 'depth'.
Posted by Jordan at 8:31 AM 0 comments

My main complaint about the Toronto was that its simplicity meant that it didn't taste like much beyond the Fernet. So the Avenue & Davenport that I first spotted on Imbibe's Twitter feed seemed to solve that problem. While it retains the basic structure of the Toronto, the simple syrup is replaced by a mixture of bittersweet Cynar and funky maraschino liqueur. Hopefully those elements will help to lift it out of the morass of Fernet. 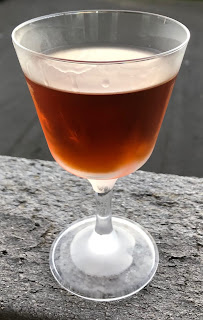 The nose is a bit of a jumble, with the rye and Fernet fighting for prominence. The sip opens with complex bittersweetness from the Cynar and Fernet, the maraschino peeks out around the middle, then sliding towards a more citrus-y bitterness at the back joined by a little oak from the whiskey. The finish is long and oaky with Fernet overtones.

This is a good drink showcasing how different amaros can be mixed to layer bitter and herbal flavors on a solid whiskey base. In contrast to the Toronto it's based on, the Fernet is much less aggressive here, despite occupying roughly the same fraction of the drink. It's equally interesting that the maraschino is a little hard to detect as I usually find it to be a very assertive ingredient. Overall I find it interesting, but not something I feel compelled to return to at a later date.
Posted by Jordan at 7:30 AM 0 comments 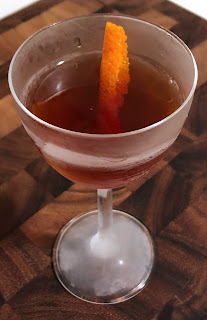 I've been scared to Fernet for years. While it slowly took the cocktail world by storm, I skipped basically any drink with it as an ingredient. But I knew I'd have to try it some day, as evidenced by the two miniature bottles that have been tucked away in my liquor cabinet for years. So I recently broke down and gave it a try, with what is acknowledged as the standard method for getting into this rather intensely flavored spirit.

Combine all ingredients, stir with ice for fifteen seconds, then strain into a chilled cocktail glass and garnish with a strip of orange peel.

The nose is a bit of a jumble with the Fernet, rye, and orange peel vying for prominence. The sip opens sweetly with a healthy dose of mint that carries into the back where it is joined by the rye and bitters. The finish is cleanly minty with a little whiskey and the bitters' spices.

As an introduction to Fernet, I think this works. While it dominates the drink, it's never abrasive or overwhelming. At the same time, I don't think this is a recipe I will reach for again. It needs something more going on to give it complexity or at least counterbalance the Fernet.
Posted by Jordan at 12:50 AM 0 comments

Auchentoshan doesn't get a lot of love, even when it's older. Some exceptions can be made when it's matured in sherry casks, but the bourbon casks usually retain too much of the polarizing distillery character.

This particular whisky was distilled in December 1997, filled into a virgin oak hogshead, then bottled in June 2016 at 48.4% without coloring or chill filtration.

Nose: creamy Auchentoshan malt with some maize character, sweet bourbon cask notes of caramel and vanilla, berries. After adding a few drops of water it is similar, but some grassy/floral character comes out.

Taste: sweet with berry notes up front, fades slowly into creamy malt and a touch of oak at the back. After dilution the sweetness becomes thicker and more syrupy, but the oak tannins spread out and become stronger to maintain balance.

While there are parallels between this cask and the Scott's Selection I reviewed earlier, this is much more clearly a modern whisky. Much of the funkier medicinal notes and grassiness in the 1983 have disappeared leaving a much more straightforwardly pleasant product. I might even go so far as to say that if you actively dislike Auchentoshan, you'll probably still like this. There's absolutely nothing objectionable about it and I would have a bit of a tough time pegging it as a Lowland spirit rather than a generic Speysider. Some of this may be attributable to the virgin oak hogshead it was aged in, though I find it surprising that such an active cask left left a relatively light mark on the spirit.

At the time of writing this appears to still be available, though I find the price rather steep for what you're getting. While I'm glad to have sampled it, I don't find myself needing more. It's a pleasant drink and I wouldn't turn down more if offered, but I suspect there are more engaging choices out there.
Posted by Jordan at 7:30 AM 0 comments

Scott's Selection occupies an interesting niche in the American malt enthusiast's psyche. Given relatively short shrift when they were originally released, they have since gained a stronger reputation as overlooked gems, especially since many survived on liquor store shelves into the whisky blogging era. However, some were real shelf turds, such as this Auchentoshan that was finally put on deep discount at Binny's after a decade or more. In this case it may have as much to do with the distillery's lackluster reputation among enthusiasts, especially when it comes from a bourbon cask rather than sherry. Luckily for me, older bourbon cask Auchentoshan is my jam, so let's see how this one did.

This whisky was distilled in 1983, filled into what was probably a refill ex-bourbon hogshead, then bottled in 2004 at 52.4% without coloring or chill filtration.

Thanks to Michael Kravitz for organizing this bottle split.

Taste: sweet malt throughout, grassy notes growing stronger and more vegetal towards the back, an acidic edge, floral and bubblegum top notes, citrus peel in the background (lemon, orange, grapefruit), bittersweet malt and oak at the back. After dilution the up front sweetness and the savoriness at the back are amplified, while the structure remains largely the same.

This isn't a complex malt, just a solid example of a good ex-bourbon cask that's been left to sit for a decent amount of time. While not as aggressively grassy as the similarly aged Archives sample I tried a while back, it has everything I would expect from an unpeated Lowland whisky. Surprisingly the strength never makes itself apparent - if you had given this to me blind I might have guessed it was at 46%.

For a different perspective on this whisky, check out MAO's review from the same bottle.
Posted by Jordan at 7:30 AM 0 comments