The Island of Misfit Rums

While rums are traditionally thought of in terms of their country of origin, there are some that defy simple classification. 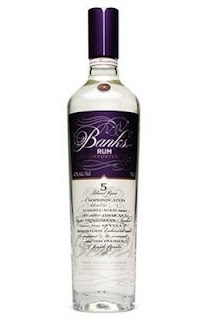 If one was going to be a little more precise, this would actually be "Banks Four Islands and Part of a Continental Landmass Rum", but that doesn't have the same ring to it. Instead of sourcing their rum from one particular part of the Caribbean, the blenders behind this rum decided to put together rums from Trinidad, Jamaica, Barbados and Guyana. Included in the blend is their "special ingredient", Batavia arrack from the island of Java. The five spirits are all aged from three to twelve years, blended together and then charcoal filtered to strip color from the spirit and produce a crystal clear white rum. Whether it's a matter of the rums they selected to go into the blend or a feature of the filtration method, this is a very crisp, dry spirit, without a lot of the caramel sweetness one usually finds in aged rums. What is there is lots of wonderful hogo, likely coming from the Jamaican rum and Batavaia arrack. What sweetness there is seems to be more of a morass of tropical fruits.

While Banks makes for a delightfully complex daiquiri, it can also be used to give more complex potions a bit of zip and funk.

Combine all ingredients and blend for five seconds with a small handful of ice. Pour into a glass with more crushed ice.

This is a relatively light drink, with two out of the three rums providing a supporting role while the Banks provides a stiffer backbone. Mild fruitiness from the lime and orange juice is backed up by the smooth sweetness of honey and a touch of spice from the falernum. Overall a rather pleasant drink with ingredients that won't break the bank. 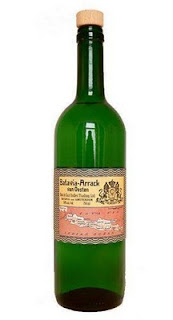 While there are those who argue that arrack isn't properly rum, if it's not it's at least the crazy cousin who you're not sure you want to hang around at first, but who turns out to be utterly fascinating in the right situations.

Batavia Arrack has a long history, proceeding the Dutch colony that gave the city of Jakarta its former name. Sugar cane from South Asia and distillation techniques from China met on the island of Java and were combined to produce the original spirit. In addition to a local variety of yeast that is used in the fermentation, a small amount of red rice is added, which contributes to the spirit's unique palette of flavors and smells.

While arrack has a fairly long history in punches and cocktails, it fell out of favor and was nigh impossible to find outside of northern Europe, where it remained in limited use in chocolates and Swedish Punch. We can thank the estimable Eric Seed of Haus Alpenz for returning this unique spirit to American shores.

This is a rather potent spirit at 100-proof, which combined with its face-punch of flavor means that it's not really designed for straight sipping. Some of this is due to the fact that the spirit is essentially un-aged, with only a brief period spent resting in large teak vats before bottling. While some of the usual rum characteristics can be found within, the primary flavor is pure hogo. Dancing around that core are hints of brandy or wine that I suspect come from the red rice.

While arrack can be a difficult spirit to work with, it shines as an accent to other spirits and in punches. One of my favorites comes from David Wondrich's book on punches, the Ruby Punch. While originally made for a large-ish party, I've scaled it down to a single serving and tweaked one of the ingredients.

Combine all ingredients, stir briefly and chill in the refrigerator or freezer until cool.

There are a lot of complex flavors playing around in this drink, but magically they all manage to balance each other perfectly. The port has a fruity sweetness that provides a base for the more complex flavors of the arrack and tea, with the lemon juice providing snap and the demerara syrup rounding out the entire drink. The ABV works out to somewhere around the mid-teens which makes this a wonderful cool drink to sip outside on a summer evening without blowing yourself away. The recipe can obviously be multiplied by the number of people you'd like to serve if you want to scale up to a full-blown punch.

If you'd like more recipes using Batavia Arrack, Haus Alpenz has a nice list.
Posted by Jordan at 9:59 PM