Westerhall Plantation rum is one of the few rums made on the island of Grenada. The Westerhall Plantation has a long history stretching back to the 1700s, passing through numerous hands over the centuries. The estate is still littered with relics of the history of sugar and rum production on the island. Their Plantation rum is special in that it is produced from both molasses and sugar cane juice, giving it characteristics of both molasses-based rums and cane juice rhum agricole. Due to the very limited production of this rum, each bottle is hand labeled with a batch number and their literature suggests that there is a certain amount of batch-to-bacth variation, which means that like single barrel whiskies, trying more than one bottle could present interesting differences.

Taste: sugary sweetness up front, a bit of alcohol mid-palate, swiftly shifting into chocolate, spice, pepper and grass going into the finish

This is a good rum that reminds me a bit of Scarlet Ibis minus the hogo, but I feel like it could use just a bit more depth. While the 43% bottling strength is higher than a lot of rums, in keeping with it's rhum agricole character, something over 45% would probably let the flavors within the spirit shine forth more strongly. However, they do get big points for not chill filtering their rum, which is evidenced by the wisps of precipitate that can be seen if you give the bottle a swirl. While some seem to think this means something is wrong with the spirit, it just means that some components of the rum will slowly come out of solution, the upside being that some of these compounds enhance the flavor and mouth feel of the spirit. I'd be curious to find out the size of the barrels that are used to age this rum, as the 'toasted oak' flavor is one that I associate with spirits aged in small barrels that give more wood contact, though the light color of this rum suggests that it didn't spend too long in whatever barrels it was aged in. Given the comparison to Scarlet Ibis, something in the 4-5 year range seems likely as it doesn't have any sharp edges, but retains some of the agricultural notes from its cane juice base.

As I suggested a while ago, I think Westerhall makes an interesting alternative to traditional rhum agricole in cocktails calling for Martinique rhum. It also makes a good base on its own in classic-style cocktails: 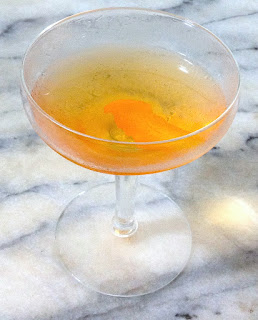 Combine all ingredients, stir with ice for 15 seconds, strain into a chilled cocktail glass and squeeze a strip of orange peel over the drink.

On the nose, the orange oil comes front and center, melding with the sweeter notes of rum and honey, with wisps of spice from the ginger liqueur, bitters and Herbsaint. The initial sip is lightly rummy with a bit of honeyed sweetness, which leads into sharper flavors of ginger, finishing on the drier spice of the bitters, with the Herbsaint licorice dancing around everything else.

Overall this is a nice, relatively light cocktail. The Westerhall plays a supporting, rather than a leading role, providing a delicate base for the other, more rugged, flavors. It is a sort of less fruity homage to Don the Beachcomber, whose drinks often featured the combination of Angostura bitters and a few drops of absinthe substitute. Add in a bit of lime juice, squint heavily, and this starts to look a bit like the Q.B. Cooler, one of his early classics.
Posted by Jordan at 8:01 PM