A few months ago I reviewed three different Speyside cask strength whiskies from Aberlour, Glenfarclas and Macallan. It so happens that I have the 12 year old whiskies from these three distillers as well. They present interesting facets of the way that Speyside whiskies can be produced. So it seemed logical to compare them to each other. 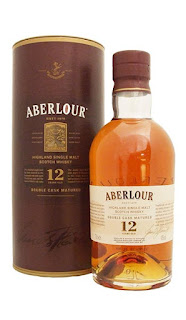 This is the older version of the Aberlour 12 Year, at 43% with chill filtration. It was the first scotch whisky I ever bought. It was on sale in Oregon for $30, which made it the cheapest I could get my hands on. I was completely unprepared for the flavors it presented to me, especially because of my lack of experience with straight spirits. I tried it a number of different times over the last year or so, but it never really engaged me until recently. It may have just been a matter of trying it in a different setting, but everything finally clicked. Unlike the other two whiskies I'll be reviewing here, Aberlour ages this whisky in both ex-bourbon barrels and used Oloroso sherry casks, then marries the two varieties together before bottling. My guess is that the preponderance of the whisky comes from the ex-bourbon barrels as the sherry influence seems less pronounced than what is found in the other two whiskies. This lets the extremely floral nose of this whisky shine over the other elements. However, the nose is definitely the highlight of this whisky. The palate is pretty decent, but the gingery spiciness is just a bit too dominant and the flavors could do with a touch of a punch-up. But hey, for a $30-40, 12 year old single malt, it's really good. This makes me interested to try the newer version that is bottled at 48% without chill filtration. However that version has also been priced around $55, at which point it's going to be tempted to pony up the extra dollars for Aberlour A'Bunadh. But if I can ever find it closer to $45, I'll be sure to snap up a bottle. 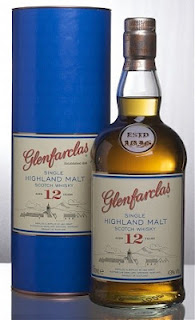 Taste: rich sugar and honey sweetened malt through to mid-palate, ginger spice arrives early and holds throughout, chocolate and dates come in near the back along with pepper, with the ginger bite becoming a little more gentle after adding a few drops of water

Glenfarclas's whisky is aged entirely in ex-sherry casks, and it shows. The flavors are strongly driven by its aging, with the dried fruits and chocolate taking center stage with strong ginger in the palate and finish. However even with all of the sherry presence, it's actually a drier whisky than the Aberlour. Also, the chocolate/date/malt combo reminds me uncannily of Chocolate Brownie Clif Bars. Given that the 'Farclas often has roughly the same price-point as the Aberlour, I think it's close to a toss-up between the two. Go for the Aberlour if you want something with more malt character, go with Glenfarclas if you'd like a more sherried whisky. 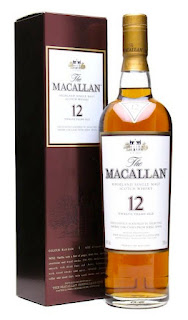 
Nose: moderately sweet sherry, PX/Oloroso split, red wine, raisins, raspberries, malt and vanilla underneath, slightly floral, with the raisins being emphasized over the sherry, and more vanilla after adding a few drops of water

Taste: jammy sweetness up front, with a burst of pepper mid-palate and chocolate-covered coffee beans leading into the finish, with more honeyed raisins, but less expansive flavors after dilution

This is where the review gets slightly unfair, because I was tasting from a mini of Mac 12 whereas I own full bottles of the Aberlour and Glenfarclas whiskies. However, Macallan's 12 Year is also hands down the most expensive, reaching a moderately eye-watering price of $55 here in Oregon. I did try to get some breadth by tasting small samples over the course of a few months, so I still feel reasonably comfortable with my assessment. I wouldn't mind giving it another try, but only if I wasn't the one paying. Macallan sherry oak whiskies are, unsurprisingly, aged exclusively in ex-sherry barrels and it really shows. My initial impression was of very high proof sherry, without much else going on. After a couple more tries I was able to find some other smells and flavors, but the sherry still takes center stage. Its flavors were also somewhat less robust than the other two, which, when you also consider the small price differential between Macallan's 12 Year and Cask Strength whiskies, means that I'd strongly recommend buying the Mac CS instead of the 12 year. If you want a lower proof sherry driven whisky, the 'Farclas would be my recommendation, both in terms of flavor and price.

Looking over all three whiskies, I think they're already arranged how I would rank them. The Aberlour edges out the 'Farclas by a bit, having a bit more complexity and a slightly better price point. The Macallan trails in my opinion, with the whisky almost being overwhelmed by the sherry. However if that's what floats your boat, it's still an interesting dram. It's just that, as noted above, I think the Cask Strength version is a much better representation of what Macallan can do.
Posted by Jordan at 11:03 AM