The Physics of Pot Stills

Pot stills are one of the oldest methods on earth for concentrating the alcohol in fermented beverages (freeze distillation may have come first, but it's hard to know). In essence, a pot still is any system for boiling an alcoholic liquid, then directly condensing the vapors to generate a liquid with a higher alcohol concentration. While they all follow this basic model, there have been historical developments that improved on the basic setup over time.

The simplest stills were literally pots, often earthenware, with a surface above it that would allow the vapors to condense and then run down into another vessel or a wide lip around the edge of the pot. As an open system, they were extremely inefficient as vapors could easily escape without condensing. Additionally, there was no easy way to remove heat from the condensing apparatus, which significantly reduced their efficiency.

The first major development in design was the retort, which is a container, usually made of glass, with an arm extending off to the side, where the vapor would collect, (hopefully) condense, and then be drain in another vessel. Assuming good rates of condensation, this was a major step forward, but there was still no good way to remove heat from the arm of the vessel.

An adaptation of the retort was to extend the side arm into a coil, which would then be immersed in a container of water, called a worm tub. The high heat capacity of water gives it a great ability to absorb heat from the condensing vapor, which made these stills much more efficient. Some industrial stills use roughly this same design, though the worm tub has water piped through it to maintain a constant cooling bath. While possible to construct a worm tub condenser from glass, those tend to be very delicate. So they were generally made from copper, which was ductile, making it easy to work with, and stronger.

The final development of the pot still came from the addition of the column or shell condenser. This is a large tube with numerous copper pipes running through it that carry cooling water. This is the most efficient cooling system for pot stills and is now the primary condensation method.

The simplest form of distillation when spirits are produced is as a wash still or beer still, which operates largely to concentrate the alcoholic portion of the fermented liquid being distilled. A lot of chemistry goes on as well, but here we're going to focus on the physical process of distillation. The wash still will convert wash at 5-8% ABV into 'low wines' at an average strength of ~25% ABV, which thus concentrates the liquid 3-4X, which a concomitant decrease in volume. Additionally, any compounds with boiling points significantly above that of water will be left behind in the pot, along with any residual solids that made it through the filtration of the mash or that were produced during distillation (especially when heat is supplied by a naked flame rather than by steam coils).

You can see from the phase diagram above that when 8% ABV wash is heated to its boiling point of 94.5º C, it vaporizes, then recondenses to a liquid of 45% ABV. Distillation proceeds as the temperature rises, the ABV of the wash decreases, and the concentration of alcohol in the condenser approaches zero. In the other direction you should note the point where the vapor and liquid lines meet, which is the point when ethanol and water form an azeotrope - a mixture that has a single boiling point. This is why ethanol cannot be distilled above 95.5% ABV.

So what's really going on? At a basic level, the purpose of any distillation is to separate different compounds by their boiling points. The components with lower boiling points will vaporize first, then so on down to the highest boiling components. The separation between different compounds is described technically as resolution. In double (or triple) distillation setups, this is carried out in a second pot still called a low wines or spirit still.

Let's consider two cases. In each diagram, the X-axis represents temperature (or time, it doesn't matter too much if you assume a flow of heat into the system), while the Y-axis represents the concentration of each compound as measured at the condenser. First, you have a mixture of two liquids with almost exactly the same boiling point. When you heat the mixture, both will vaporize at roughly the same time and the concentration of each compound in the condenser over time will rise and fall in tandem. 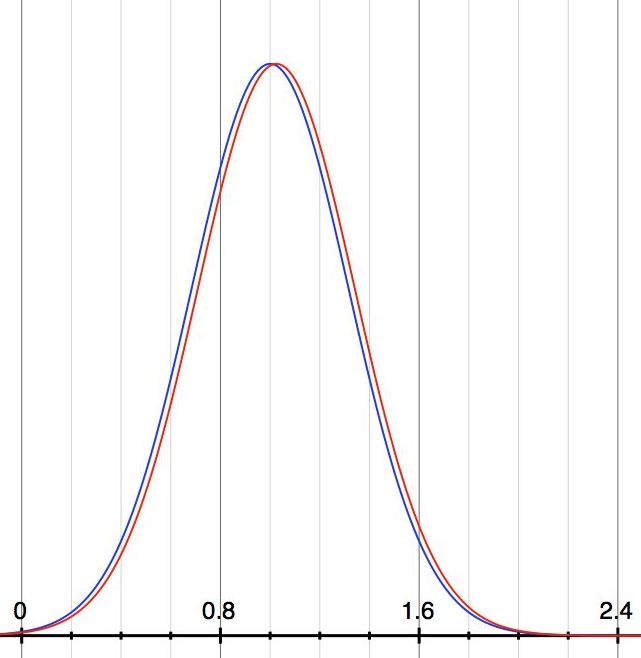 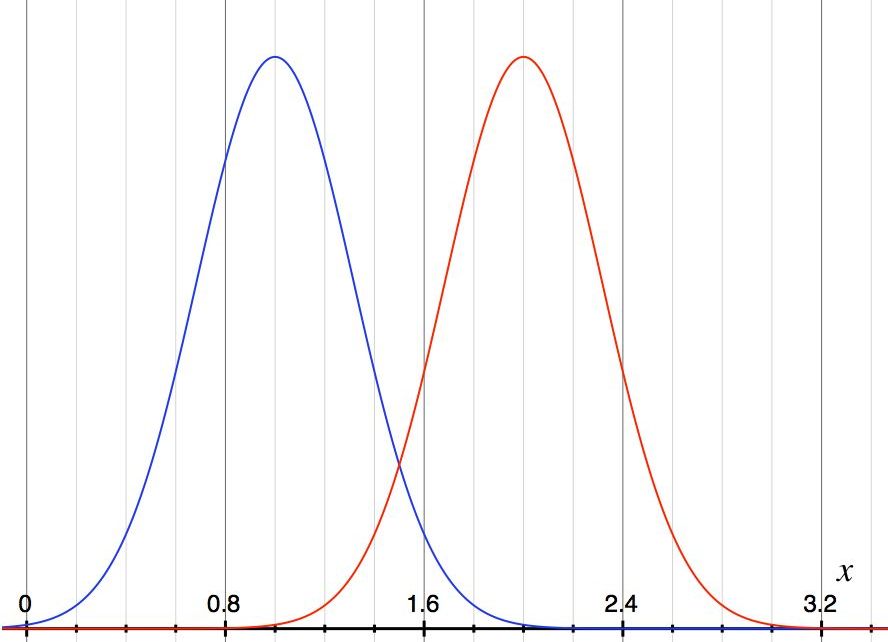 Last, a mixture of two liquids with very different boiling points. This case will be very similar to the last one, but the period where both liquids are coming out of the condenser will be much smaller. This is the resolution that I talked about earlier - the greater difference in boiling points increases the separation between the two peaks, making it easier to 'resolve' one from the other. 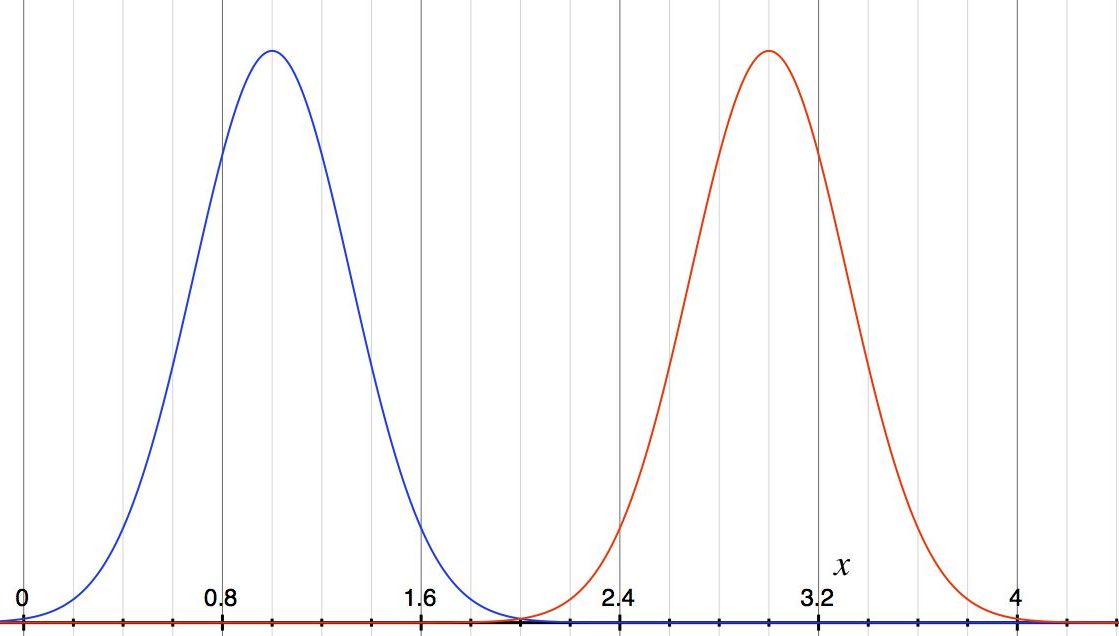 Now obviously even the simplest distilled spirits are a much more complicated case, as there are hundreds if not thousands of different compounds that are going through the same vaporization-condensation process alongside the main constituents - water and alcohol. But the principles remain the same, you just have to imagine almost countless overlapping distributions.

There are a number of different ways to influence the resolution in a pot still.

One is the rate of heating the contents of the pot. This is described by distillers as running the stills 'fast' or 'slow'. Adding heat quickly will cause more compounds to vaporize at the same time. In contrast, slow heating will have the opposite effect, as the temperature rises slowly and low boiling compounds can vaporize and enter the condenser before the pot becomes hot enough to vaporize the high boiling components.

The second major component of resolution is the amount of reflux in a still. Put simply, reflux is the tendency of vapors to recondense before reaching the condenser, which makes them fall back into the pot, where they can be reheated and vaporize again. This usually happens because the vapors contact the material of the still and transfer some of their heat to it, which removes that heat from the vapor and reduces its temperature. This forces the higher boiling components to go through the kind of separation described above again and again, significantly increasing the resolution. On a more macro level, this also affects the strength of the spirit that can be obtained in a single distillation, as a greater degree of reflux allows for greater separation between alcohol and water, producing a spirit of a higher strength.

The above diagram shows the equilibrium curve between liquid and vapor mixtures of ethanol and water. This is a different way to visualize the temperature:concentration phase diagram shown above. This chart assumes that the temperature is at the boiling point for a given mixture, then displays the relationship between the concentration of ethanol in the liquid and vapor phases. The hashed line is where the liquid and vapor phases have equal concentrations. Drawing a vertical line from the starting concentration in the liquid up to the equilibrium line gives the maximum concentration that will be achieved in the vapor phase. A horizontal line would be drawn from that point going to the equal liquid/vapor concentration line in an ideal case where there is 100% reflux and everything coming out of the condenser is returned to the pot, which results in the liquid and vapor phases establishing a stable equilibrium. But in the case of an operating still, where mass is removed from the condenser and the system is not in perfect equilibrium, as represented by the lower solid curve (not actual data, but suggestive of a normal pot still), the liquid in the condenser will have a slightly lower maximum proof, so the horizontal line is drawn to the curve rather than the dashed equality line. This procedure is repeated as the mixture is repeatedly distilled, up to the point where ethanol and water become an azeotrope. This kind of analysis can thus tell you how many distillations will be required to reach a particular maximum strength. This is why double distillation usually reaches a maximum of ~70% ABV, but triple distillation can reach ~80% ABV.

It is in the second distillation that the concept of 'cuts' comes in. While different compounds are hitting the condenser at different times, they will all be collected unless the output is diverted into different receptacles. Most of those early peaks are things that you do not want to be drinking, like methanol, acetaldehyde, and other toxic compounds. So the person running the still will send some of the early output, known as foreshots, to the 'feints receiver'. Visually this can be thought of as making a vertical slice through one of the peaks - everything before goes to one place, everything after elsewhere. What comes next is the 'heart' of the run, usually running between 70% and 60% ABV, which contains the bulk of the alcohol and congeners that make the spirit taste good. As alcohol concentrations drop, water concentrations rise, and other higher boiling congeners that are also undesirable begin to hit the condenser. A second 'cut' is made at this point, sending the 'tails' or feints into the feints receiver as well.

That should cover most of the basics. If you have any more questions, feel free to ask them in the comments and I'll do my best to answer them.
Posted by Jordan at 8:05 AM