Though I've noticed posts on the subject on some of my favorite cocktail blogs from time to time, when I noticed that the most recent Mixology Monday theme was limes, as picked by Doug over at the Pegu Blog, I knew it was time to toss my metaphorical hat into the ring. Lime has always been my favorite complimentary flavor for drinks. It's an obvious companion for everything from rum to tequila to gin. It's safe to say that ~75% of the drinks I make have lime in them either directly, in the form of lime juice, or indirectly, in the form of falernum or some other infusion. With that said, this also makes picking a particular drink that much harder. However, there's one drink that I've been meaning to share that fits the bill rather well: 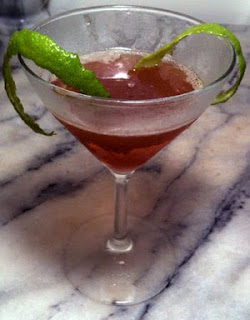 If I remember correctly this was one inspired by Eleven Park Madison, though their cocktail menu has changed since I lasted looked at it, so I can't be more precise than that. Further back, it's also an elaboration on the Olympia. Either way, it's a delightfully rich and spicy drink. The base rum needs a lot of depth to balance out the fairly strong flavors of the spiced rum and the Heering, which is why something like the Diplomatico works so well. And last but not least, the lime juice provides a delightful tartness and keeps the drink from becoming cloyingly sweet.
Posted by Jordan at 10:03 PM