Up next in the series, I'd like to return to the topic that featured prominently in my very first post, House Spirits. 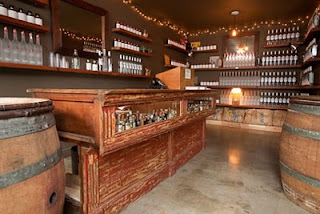 From House Spirits
My introduction to their products goes even further back. Back around 2005 I discovered that gin was in fact rather tasty. While poking around the local liquor store, intent on getting a bottle of Bombay Sapphire, I noticed another bottle of gin on the shelf that said it was made in Portland. Since I tend to like buying local products and it didn't cost a whole lot more, I took a risk and got a bottle. That turned out to be a very good choice as Aviation suited my tastes even better than the Sapphire. To explain some of the differences, I'll have to go a bit into the history of gin. These days, people tend to associate gin almost exclusively with the London Dry style (Tanqueray, Beefeater, etc.), but that's only a fraction of what was and lately has lately become available.

From Haus Alpenz
The diagram above shows the relationships between different styles of gin and their general characteristics. Bombay is firmly in the London Dry style, which means that it has a very sharp and juniper-heavy flavor profile, due to the fact that the botanicals are extracted by placing them in baskets within the still so that the hot alcohol vapor passes through them and carries some of the flavor along. In contrast, a gin like Aviation, which is modeled after Dutch genever, is produced by soaking the botanicals in neutral grain spirits and then distilling the resulting 'tea'. This results in a much rounder flavor profile.  Aviation is also less dominated by juniper and has a lot of citrus flavor. Overall it still has some of that distinct gin bite, but it's less astringent than a juniper-forward gin. Which is all to say that it's rather tasty to me.

Bring us back to the topic at hand, while my tastes have shifted away from gin since then, I've still been watching House Spirits closely as their product line has grown a lot since I first discovered them. Though they started off doing exclusively unaged, white spirits (vodka, gin and aquavit), they are now producing a much wider variety of spirts, ranging from whiskey (both aged and unaged) to shochu (distilled sake) to rum (unfortunately not very tasty, from my perspective) and more. In addition, their on site store has expanded dramatically in the last few months to include all sorts of cocktail equipment, ingredients and books. House Spirits is a wonderful local icon and I look forward to seeing and sampling the new spirits that they're going to be putting out over the coming years.
Posted by Jordan at 9:34 PM