As a follow-up to my piece about good places to drink in NYC, I thought I'd bring things a bit closer to home.

Portland, while far from the biggest city on earth, has a lot going for it in terms of being able to get a good drink. The OLCC may be a pain in the rear, but we more than make up for it with lot of local producers of beer, wine and spirits, coupled with a burgeoning mixological movement. Since they're usually the drinks I'm willing to go out of my way to get, this is however going to be a bit tiki-heavy.

Thatch is a fairly recent addition to the Portland bar scene and provides some competition for Portland's other tiki bar, The Alibi. Thatch does have a fair amount of history to it, as much of its decor was rescued from Jasmine Tree, a former Portland tiki staple, which had obtained its decor from the former Kon-Tiki of Portland. Tiki never dies, it just gets passed down the generations. So the atmosphere of the bar is absolutely perfect, from the little bridge over a water feature that you cross when entering the bar to the pufferfish lanterns to the (in)famous Marquesan Baby Eaters. However, what really matters are the drinks. I first went to Thatch for my birthday earlier this year and make the mistake/entirely correct choice to get a 1934 Zombie. It's not a drink for the faint-hearted, as the total alcohol content is equivalent to about 6 oz of 80-proof spirit or roughly four regular drinks. They're usually listed as a "limit two per customer" drink and one was more than enough for me. Both my roommate and I ended up sitting around the bar for another couple of hours just downing water in an effort to sober up so we could get ourselves home. During our next visit, we were able to get there for happy hour, so the $5 mai-tais were more or less mandatory. Mine was totally decent, though I'm a bit happier with some of the ones I've made at home. The Nui-nui I had was also totally decent, though it was a little weak in the rum department, mostly tasting like orange juice and cinnamon. Tasty enough, but since I tend to like rum-forward drinks, this one felt lacking. With that said, my own attempts at the Nui-nui have left something to be desired, so I can't really fault them. I seems like a tricky drink to get right, even though all of the ingredients seem dead on. Some day...

But to wrap things up, Thatch is definitely a place to visit, even if you've never had a tiki drink or have been unfortunate enough to only be exposed to low quality versions so far. They have an excellent selection of rum and other spirits and seem to take a lot of pride in making solid drinks.

While the Teardrop has a reputation for making solid cocktails all the time, it was the siren song of tiki drinks that drew me in. Due to a relationship with Trader Tiki, the Teardrop has tiki nights from time to time. 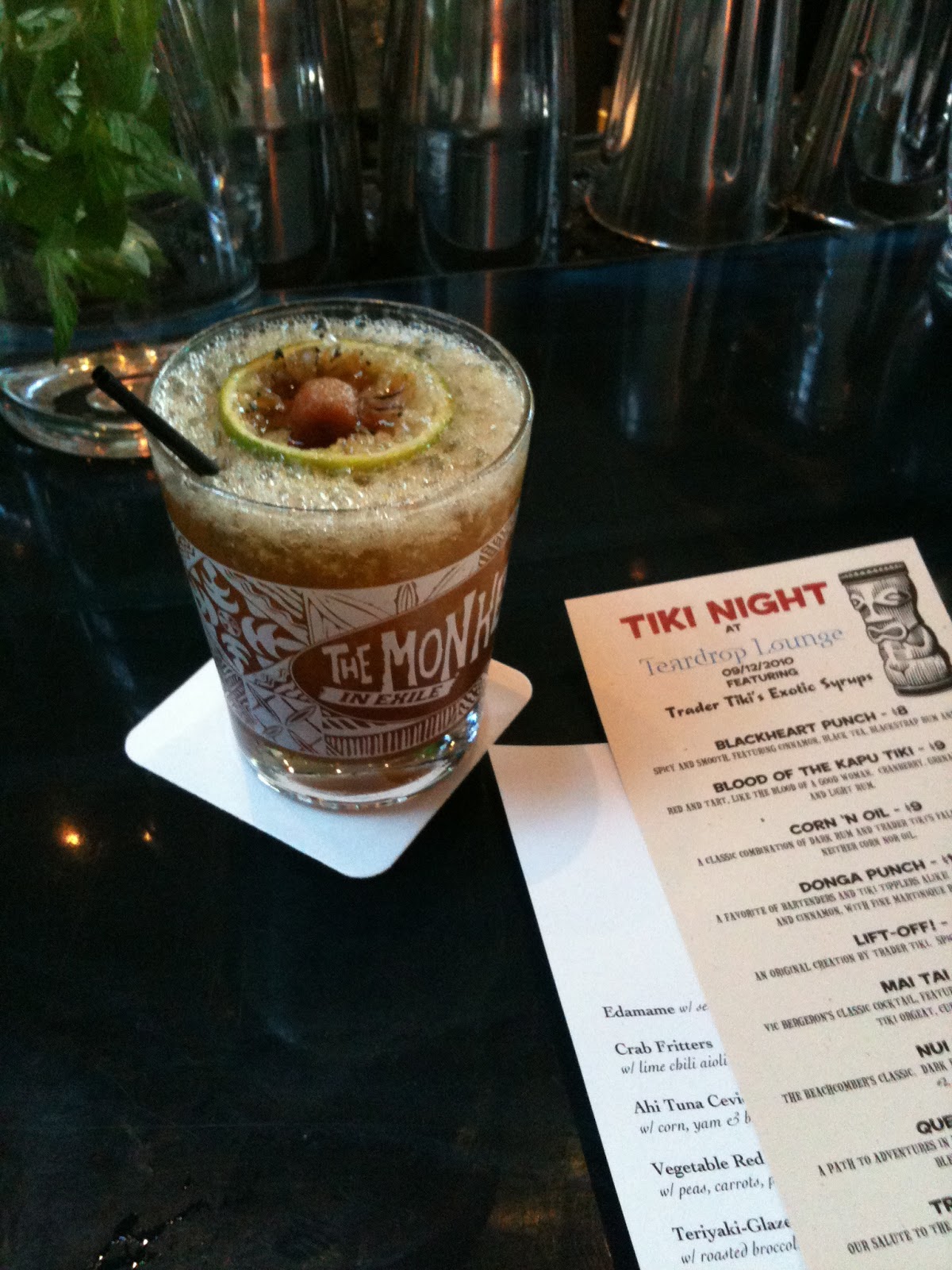 My first drink, as pictured to the right, was the Lift-Off! In case it wasn't clear, about thirty seconds before I took that picture the spent lime shell was full of flaming 151-proof rum, which made for a pretty excellent show. The drink itself was a little bit less exciting, with the rum fading into the background more than I would have liked. Still tasty, but it didn't knock my socks off. Thankfully the night was more than saved when I took a bit of a risk and ordered a Donga Punch. I say that it was a risk, not because I didn't trust the bartender, but because I'd had less than wonderful experiences with rhum agricole before. I had previously bought a bottle of St. James Royale Ambre for making mai-tais. However, it proved to be a less than stellar choice as it has an incredibly strong, incredibly funky and generally off-putting flavor. Further experimentation showed that it could be useful, but only in small doses and balanced by other rums. However, the Donga Punch is a one-rum drink, so I wasn't sure exactly what I was in for. But as I've already noted, it turned out beautifully. The sourness of the lime and grapefruit was perfectly balanced with subtle funkiness from the rhum and the spice of the cinnamon syrup. I was absolutely entranced and took a quick peek behind the bar before I left to find out what kind of rhum had gone into making the Punch. While it took a bit of tracking down, the ever-useful Pearl Speciality Spirits came to my rescue so I could pick up a bottle of Rhum J.M. Gold. Ever since I've been happy whipping up Donga Punches, which are now hands down my favorite drink.

While there are many other Portland drinking institutions that I need to sample and write about, these two are a solid start for anyone looking for a tasty libation in town.
Posted by Jordan at 9:39 PM