Over the course of the last couple of evenings, I've tried three different sherried cask strength single malts from Aberlour, Glenfarclas and Macallan. There were a fair number of similarities between each scotch, especially in terms of the method of aging, their lack of age statements, their bottling proofs, and the fact that each is a big step up from their 12-Year old, lower-proof siblings. At the same time, the fairly wide range of prices means that some seem more worthwhile than others. These reviews are slightly provisional as I tried all three at a bar and thus haven't taken my normal route of tasting a spirit several times on different days. However, they were all fairly healthy pours, so I did get to spend a fair bit of time nosing and tasting each whisky. 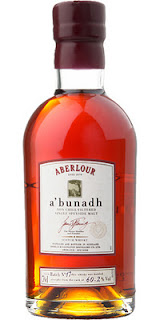 Taste: lightly sweet up front, followed closely by sherried sweetness that carries through the palate, developing malty chocolate near the end, which gains some oatmeal and maple syrup with dilution

This is a non-chill filtered, cask strength Speyside single malt from Aberlour. Bottled right around 120 proof (there are small variations from batch to batch), it comes with no age statement, but is likely a blend of malts aged from 10-15 years exclusively in ex-Oloroso sherry barrels (I've also had the 12 year and don't detect significantly more barrel influence in the A'Bunadh). My succinct description of this whisky is that it's breakfast in a glass. The intense maple syrup and oatmeal flavors, especially on the nose, make that an inescapable association. Though it commands a fairly significant premium over the aforementioned 12 Year expression, it's also a huge step up in terms of the intensity and variety of flavors.


Nose: slightly sour wine, malt, vanilla, sweeter sherry underneath and raisins, which shifts more towards PX-style sherry over time, with malt becoming more dominant alongside subdued raisins and sherry underneath with hints of chocolate, brown sugar and porridge after dilution

It's a little bit difficult to find info on the exact details of how this whisky is produced. Glenfarclas is also located in Speyside and this whisky is clearly aged in ex-sherry barrels, but I haven't been able to figure out what type of sherry used to reside in the barrels. It is bottled at 105 British proof, which is the same as 120-proof or 60% ABV in the usual sense. As with all of these whiskies, there is no age statement, but what I've read suggests that all of the barrels that are blended to make the final spirit are at least 10 years old and I would say that it seems to be as mature as the A'Bunadh. The hefty dose of bittersweet chocolate found throughout the experience of consuming this whisky ticks it a few marks above the others, but it's hampered by costing at least $20 more than the next most expensive. As with the Aberlour, also I find this to be a significant step up from the lower-proof 12 Year bottling from Glenfarclas, both in terms of the range of flavors and their depth. Whether it's worth the extra coin is up to you.

Taste: brief citrus sourness at the very begin, slipping into sherried sweetness, then black pepper and drier sherry finally leading into chocolate near the end, which becomes honey malt up front, with more subdued sherry, a malty middle, and chocolate and pepper near the end after dilution

In a slight divergence from the other two cask strength whiskies I tried, Macallan is part of the broader Highlands region rather than the Speyside sub-region. However, they claim that Speyside is their 'spiritual home' and its style is very similar to other Speysiders. Macallan has a tradition of aging all of their whiskies in ex-sherry casks. The Cask Strength expression is part of their Sherry oak line, which are all matured in casks made from Spanish oak. There is no age statement on this scotch (though it is now giving way to a 10-Year Cask Strength expression), but it seems as mature as the 12-Year, so my guess is that the average age of the whiskies blended to make this spirit is right around there. This was the simplest cask strength scotch I tried, being a fairly clear evolution from the basic Mac 12-Year, with the PX sherry-heavy nose. However, the smells and flavors are much richer and there is a certain appeal to the heavy dose of pepper that emerges mid-palate, helping to keep it from becoming insipidly sweet and unidimensional. Additionally, it can occasionally be found for as little as $55, which makes it no more expensive than the Mac 12 and an obvious choice over that expression. Up at $65+, I would say that the Aberlour edges it out, though the A'Bunadh is a little bit sweeter.

To line these three whiskies up, I liked the Glenfarclas a bit more than the Aberlour, which was an improvement over the Macallan. Additionally, the Aberlour is probably the best value out of the three, unless you can find the 'Farclas or Macallan on sale. However, if you're looking for a sherry bomb, it's hard to go too far wrong with any one of the three. You'll just have to try them and see which tickles your fancy.
Posted by Jordan at 4:57 PM