This is a continuation in my series reviewing the Rhum J.M. line of rhum agricole. The VSOP expression has been aged for a minimum of four years in American oak and French Limousin oak casks. This makes is several times older than the élevé sous bois expression and about half as old as the 1997 Vintage above it.

Taste: lightly sweet up front, switching to grass, herbs (anise and fennel), brandy and toffee, which becomes creamier and reveals nutmeg after adding a bit of water

This rhum is definitely a step up from the élevé sous bois bottling in terms of refinement and the nuance of the flavors. Age has made it a bit drier and more of the spice characteristics have emerged. Nutmeg seems to be a particularly strong element in the aged J.M. rhums, along with the usual grassy brandy flavors. It's set up well for sipping neat, both because of the extra time in the barrel and because its at a slightly more gentle 90-proof. I got incredibly lucky and was able to find this rhum for ~$35. It usually goes for $55-60, so that was quite a deal. Obviously I stocked up and hopefully I should have enough to last years if not decades. At the regular price it's a little bit hard to justify over either Rhum J.M. Gold, which has a much smaller unit price, or Clément VSOP, which is at least as good and a bit cheaper. And while Rhum J.M. VSOP is an incredibly good sipper, it also makes some rather solid cocktails. Much like the Clément VSOP, it's a shoe-in for a Donga Punch. The balance with Rhum J.M. VSOP is absolutely fantastic, with the rhum, grapefruit, lime and cinnamon syrup in perfect tension, making it hard not to drink it all down in one go. As a side note, white grapefruit, which also gets sold as 'Cocktail Citrus', is in stores right now and makes much better drinks than its pink cousin. There's something almost spicy about white grapefruit juice and it adds quite a bit of vibrancy to tiki drinks. 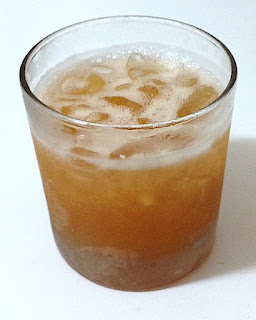 This is a slight tweak on the Don's Beach Planter from Jeff Berry's Sippin' Safari, by replacing the pineapple juice with grapefruit and bumping up the r(h)ums by 50% to keep them from disappearing among the strong fruit flavors. The balance ends up being pretty good. The grapefruit and passionfruit synergize nicely, actually producing a flavor not too far off from pineapple, which confused me a bit when I took the first sip. The r(h)ums are right behind, with the funky notes hooking up with the Angostura bitters and Herbsaint. Overall this is another potent tiki drink that sneaks up on you, but provides a very satisfying experience.
Posted by Jordan at 9:52 PM