While I was up in Washington over the holidays, I was able to snag a couple of sets of Balvenie Mini 3-Packs. They contain minis of the 12 Year Doublewood, the 15 Year Single Barrel and the 21 Year Portwood. Given that the Portwood is usually a $150+ whisky, the whole set, at a bit under $20, costs less than a pour of the Portwood would go for at a bar. So this is a really excellent way to get a sense of what Balvenie has to offer. 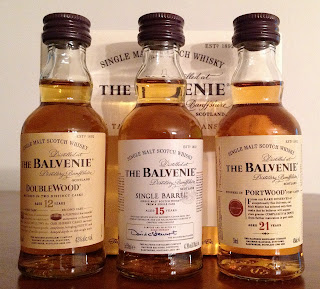 Taste: heather honey front, then mild pepper spiciness with chocolate, a burst of sherry and a fade into malty pepper, which loses a lot of its oomph after adding water

Finish: malty pepper and chocolate, with hints of sherry

As the name implies, this whisky is aged in two different types of casks. It spends most of its life in traditional ex-bourbon casks and is then transferred to ex-sherry casks for a few months. I like what the Doublewood has to offer, there just isn't enough of it. While there's a rather nice set of flavors, the intensity just isn't enough. I feel like I really have to dig for some of them. And when the DW is $55 here in Portland, it's hard to justify this whisky when other double matured whiskies, like Glenmorangie Lasanta, are both more richly flavored and cheaper.


Nose: toffee/caramel, vanilla, malt and a hint of chocolate, which gets weaker and less well-defined after adding water

Taste: heather honey up front, a nice burst of pepper and chilies mid-palate, which fades into spicy chocolate, malt and sherry, which is simply diluted by the addition of water

I liked the Single Barrel a lot more. The intensity was kicked up a few notches and the spicy chocolate thing was really appealing. However, the fact that it felt a bit flat on its face after adding a few drops of water was really disappointing. I'm also not sure how I got so many flavors that reminded me of sherry given that the whisky is aged exclusively in "traditional oak", usually 250 L hogsheads, without the double maturation treatment. So while it was good, again, the experience doesn't really justify the rather steep $80 price tag here in Oregon.


Nose: tawny port and honey nut malt, with raisins and vanilla, which becomes more expansive and slightly less port influenced, substituted with more flowery and perfumed notes, after adding a bit of water

Taste: subdued heather honey up front, a bit of spice, pepper and tropical fruits, with port influence throughout, which becomes creamier and less sweet, with cacao, pepper, port and malt after adding a few drops of water

Again, there were some good things about the Portwood, but I wanted more of them. Actually, I want an awful lot more of them given the price tag. It's entirely possible that there are subtleties that I'm missing due to inexperience, but I just can't appreciate this as much as many other reviewers have. I'll gladly take the Glenmorangie Quinta Ruban, which costs a third of the Portwood.

In conclusion, I generally like what Balvenie has to offer, just not at the prices they're charging. These are probably fantastic single malts if you want something on the lighter side, but I prefer my whiskies to have a bit more punch. To a degree, I feel like this is due to the fact that, with the exception of the Single Barrel (which was coincidentally my favorite), these are bottled at only 43% and chill filtrated. Chill filtration may be robbing these whiskies of a lot of their potential. As I've had plenty of whiskies that did just fine at 43%, I'm not sure if it's exactly deleterious, but I do wonder if that's why they don't seem to handle water too well. I'm open to having my mind changed, in case this was a fluke, but that won't happen unless someone decides to send me some more because I won't be spending any of my own money on Balvenie's products. However, if you haven't tried them before, hopefully you can get your hands of one of these mini 3-packs and decide for yourself whether these whiskies are worth the cost of entry.
Posted by Jordan at 6:35 PM