Recently Doug over at the Pegu Tiki Blog posted a review of various recipes for the Dr. Funk cocktail. This is in a sense one of the ur-tiki drinks, having been invented in the South Pacific long before Don Beach touched a bottle of rum. You should really go read the full history that Doug posted, which includes figures like Robert Lewis Stevenson and Paul Gauguin. However, it seems that none of the recipes available make for a really inspiring drink. Looking over the lists of ingredients, I could see that there should be a good drink somewhere among them, so I decided to tinker a bit.

This was basically an attempt to split the difference between Don's version and Trader Vic's. 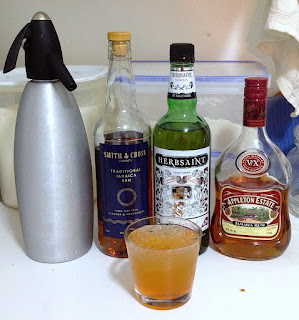 Combine all ingredients except for soda water, shake with ice and strain into a chilled rocks glass full of ice. Top with soda water. and stir briefly

The sip leads off with a tingle of soda water, followed closely by the Jamaican rum dunder funk. This segues into lime and sugar, which quickly transforms into a melange of Herbsaint anise and grenadine fruitiness, with just a hint of the soda water's carbonic acid.

It took a couple of tries but I'm pleased with how this drink turned out. I was quite happy to find that the Smith & Cross/Appleton V/X combo did an excellent job of tying down the quarter ounce of Herbsaint. I was worried that it would overwhelm the drink, as six drops is usually enough for most of the drinks I enjoy that contain Herbsaint. The soda water helps to leaven the drink and its carbonic acid works to counterbalance the hefty doses of syrups. Go with half an ounce of soda water if you want a more spirit-forward drink and an ounce if you want a more fruit and anise-focused drink.
Posted by Jordan at 10:08 PM