Thanks to Tiare for pointing out that it's National Mai Tai Day today (for a few more hours). 'Cause, you know, we need more reasons to drink the best cocktail in the world.

A quick recap of the history: the Mai Tai paternity battle has raged for decades, but the consensus now seems to be that Trader Vic can be credited with the definitive recipe (even if he may have been trying to copy one of Don the Beachcomber's drinks). The potentially apocryphal story is that Trader Vic invented the cocktail for Tahitian friends in 1944. The name comes from the Tahitian phrase that translates as "the best". Whether or not the story is true, the appellation certainly is. 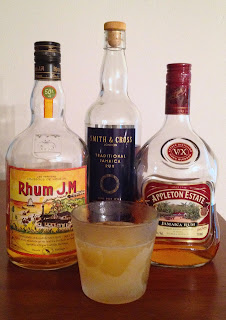 As I've mentioned before, the Mai Tai is the classic tiki drink. It's a perfect example of how reshaping the basic rum sour recipe with multiple rums, liqueurs, and syrups can create drinks of unimaginable deliciousness. Even better, it's perfectly amenable to use with other base spirits.

However, the rum Mai Tai will always be the best. My current favorite is a combination of Smith & Cross, Appleton V/X, and Rhum J.M. Élevé Sous Bois with homemade orange liqueur and B.G. Reynold's orgeat.

Combine all ingredients, shake with cracked ice, and pour unstrained into a chilled rocks glass with more cracked ice.

While not quite as burley as Tiare's Mai Tai, this version has plenty of heft. Initially the Smith& Cross is a little too dominant, giving the drink a rough edge, but as the cracked ice does its work, the cocktail smoothes out and becomes simply delicious. All of the rums blend together perfectly. But between the S&C and Rhum J.M. you'd better watch out because it'll sneak up on you.
Posted by Jordan at 10:01 PM