Whisky Review: Macallan Cask Strength and the Effects of Dilution

After drinking a dram of Macallan Cask Strength back in January, I decided to pick up a full bottle as it was on sale for only $55 in Oregon, roughly the same price as the much weaker Macallan 12 Year. While I think it's a good whisky at full strength, I was also interested to see what could be found if it was diluted down to a more standard proof. Ryan over at Value Whisky and Josh at The Coopered Tot have both run experiments with cask strength whiskies, which found that letting a diluted whisky 'integrate' with water produces a much more enjoyable dram. So I decided to take that path instead of diluting the whisky and drinking it immediately. I made dilutions of Macallan CS to 55%, 50% and 45% ABV and bottled them to let them sit for a few days before tasting them. 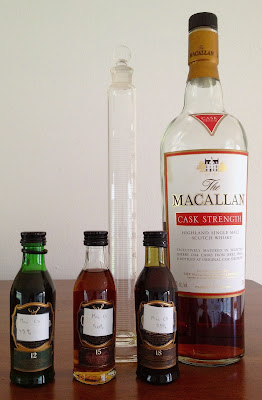 Taste: slightly sweet and fruity up front, but not particularly rich, sherry is relatively subdued - rides underneath and grows towards the back of the mouth, pepper is still there - comes in strong then fades into mild bitterness

I think this would be the perfect way to entice a die-hard bourbon or rye drinker into the world of single malts. The nose reminds me very much of a well-aged American whiskey, with strong grain-derived elements and the sherry taking a back seat. Overall I think I would describe this as the most pleasant strength to drink Macallan CS at - not the most interesting, but an easy sipper that should please quite a lot of palates.

Taste: sugary sweetness up front, then muddled sweet fruits, big pepper, bitter chocolate or mocha near the back

This is one of my favorite strengths for this whisky. All of the key flavor elements are present and assert themselves very nicely. The nose is strong without being overpowering, the palate is rich without singeing the taste buds, and the finish lingers with delicious bittersweetness. This is essentially what I wanted Macallan 12 Year to be and expect that it could be if the distiller was willing to offer it at a higher bottling strength.

The only downside here is that the relative youth of this whisky starts to manifest itself at this strength, with a bit more heat than I would hope for. I'd be interested to compare the No Age Statement version I have with the 10 year old cask strength Macallan that is sold in other markets. I've heard that the NAS version is made up of whiskies that are roughly 8-12 years old and I think it shows. A greater proportion of older whiskies would help to round it out a bit.

Taste: less sweet, but sugar remains as an undercurrent, bigger pepper, sherry becomes much stronger further back, bittersweet chocolate near the back

There's nothing particularly wrong with this strength, I just feel like it doesn't offer anything that the 50% version doesn't, but there's also a stronger burn that detracts a bit from the experience. By the same token, it's not as full-throated as the undiluted cask strength whisky, so 55% is just an uncomfortable middle ground.

58.2% ABV - Full Strength
Nose: heavy Oloroso sherry with a hint of PX sweet raisins, bourbon undertones of sweet, malty grain and vanilla, sugar, bittersweet chocolate, general fruitiness, some nice floral notes after airing out
Taste: rich but not too sweet up front, fruit and sherry expand from the tip of the tongue, growing sweeter as the spirit spreads across the mouth, a huge burst of pepper blooms mid-palate and extends into the finish, drying towards the back of the mouth with a healthy dose of wood
Finish: lingering pepper and sherry, a touch of bitter wood and mocha, vanilla

The Real Deal. There's a reason they bottle it at this strength. Completely in your face whisky. Everything is big and it holds nothing back. There's a fairly strong amount of burn, which is somewhat unsurprising given the bottling proof and age, but it's a bit hard to pick out from the big pepper flavors on the palate and finish. As I mentioned above, I think this could be an even better whisky if there were a greater proportion of older malt in this whisky as it could do with just a bit more refinement.

There are comparisons to be made with Arran's Sherry Single Cask, as they both have similar flavor profiles, but the Macallan CS is younger and brasher. The Arran is big and bold with lots of pepper, but feels like a more integrated whole, whereas the Macallan jerks you around a bit. The Macallan also shows a much stronger sherry influence, which I'm guessing comes from first-fill casks. At the moment I'd have to give the nod to Arran as they're the same price here in Oregon, but eleswhere the Macallan would be a slightly better value.

As you can see, there are basically the same elements at each strength, but the manner and degree to which they present themselves can vary significantly. Personally, I'm most fond of the 50% and full strength versions. The 50% is probably the most balanced, with some of the harsher edges rounded out without becoming quite as subdued as the 45% version. However, there are times that the full-blast cask strength is what I want and it offers quite a ride. I'd highly suggest experimenting with dilutions at different strengths when you get a cask strength whisky. There are other perspectives to be found within when it's not running at full bore.
Posted by Jordan at 5:48 PM