This is a drink that I tossed together in an effort to finish off my bottle of Clear Creek's apple brandy. It was partially inspired by the Lucien Gaudin Cocktail I wrote a post about a while back, though I aimed for something a little less sweet. 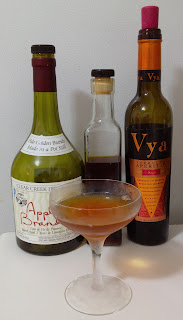 Combine all ingredients, stir with ice for 15 seconds, and strain into a chilled cocktail glass.

The nose is dominated by sweet apple notes from the brandy and spices from the falernum and Angostura bitters. A very peculiar fruitiness also emerges from the interaction between the apple brandy and vermouth. The sip is initially fairly mild. The apple brandy provides a smooth canvas for the other flavors, continuing through the experience but not asserting itself too strongly. There is once again a slightly odd interaction between the brandy and wine that dances around for a bit. The falernum and spice elements of the bitters come in strong mid-palate, riding a wave of cinnamon, cloves and allspice. Going into the finish there is a building sweetness underneath the bitterness from the Angostura and vermouth. The finish continues the heavy spices, bringing out an almost chocolate-y flavor.
Posted by Jordan at 7:25 AM