This review also comes care of The Party Source's copious supply of miniatures. I was really interested to try this bourbon, because it gets rave reviews from so many bourbon drinkers.

Woodford Reserve is the premium bourbon label for Brown-Forman, a drinks conglomerate that also owns such well-known brands as Jack Daniels. Woodford is nominally produced at its eponymous distillery near Versailles, Kentucky in what was formerly known as Labrot & Graham's Old Pepper Distillery, a location with history stretching back to 1797. However, its latest incarnation came about when BF repurchased the distillery in 1993, launching the Woodford line in 1996. This timeline suggests that at least initially, Woodford must have been created from whiskey made at other BF facilities, as NAS bourbons must be at least four years old. Woodford is made from a high rye mash bill of 72% corn, 18% rye, and 10% malted barley. As I mentioned, there's no age statement, but the whiskey is bottled at a very reasonable 45.2% ABV. 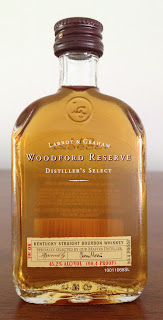 
Nose: lots of sweet aromas of butterscotch/toffee, bubblegum, and artificial sweeteners, along with some hints of vanilla, grainy notes of corn and wheat, herbal rye tang, musty oak, berries, and plastic wrap. After adding a bit of water, almost everything but the sweetness and oak are turned down, with more vanilla, some maple syrup and grape soda.

Taste: initially there is a huge wash of artificial sweeteners, grape soda, and bubblegum, with flashes of citric acid (not fresh citrus), there's some rye pepper near the back, with a hint of orange peel. After dilution, the sweetness becomes even more syrupy, with more pepper, oak and some green wood near the back.

Finish: pepper carries through, sweetness becomes even more unpleasantly artificial, with some stale bubblegum notes, leavened by a bit of oak.

It's hard to describe just how unpleasant I find this bourbon to be. It's the first time I've actively disliked a whiskey, rather than just finding it uninteresting. The cloying, aspartame-like sweetness is extremely off-putting while bubblegum and grape soda notes just make me think of Dave Chapelle's sketch about grape drink (1:30 into the clip). The flavor isn't even grape, it's purple.

It's hard to tell that this whiskey was actually made from plants, rather than having been concocted in a lab out of 'flavor chemicals'. The unrelenting sweetness would be much more tolerable if it just seemed to be real, like the caramel or maple syrup notes that one would expect from a barrel aged spirit.

In the realm of confounding rather than bad, I also find it peculiar how little rye influence I get out of this bourbon. While I picked up a little bit on the nose, it seemed much more like a wheated bourbon. This is odd as the 18% rye in its mash bill pushes it well into high rye recipe territory and plenty of bourbons with a lower proportion of rye in their makeup have displayed much more robust influence. However, I guess that just goes to show how complicated the process can be. Mash bill matters, but there are ways to get around it.

It's entirely possible that this is all just some quirk of my own sensory equipment. As I noted at the beginning of the post, quite a lot of people like this bourbon, though I'm not the only person to find it too sweet. But from where I stand, it's not something that I can recommend. If you really want to try some, get a mini or a pour at a bar before splurging on an entire bottle. I can only hope that your experience will be better than mine.
Posted by Jordan at 7:17 AM