Since I wasn't able to do one of the most in-depth tastings/tours at Laphroaig, I decided to sample some of their whisky after I got back into Port Ellen. 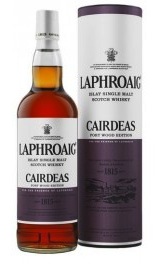 Nose: big blast of Laphroaig peat (roasted vegetables/wood smoke/medicinal), rather dry (though getting sweeter with time), underlying malt, a little green, vanilla. After adding a few drops of water, the peat shifts to more of a mossy/barbecue mode, but otherwise the nose doesn't change much.

Taste: lots of port cask influence up front (rather pink), then it drifts back into malt, oak, and peat, with the peat and oak making the opening bittersweet, which eventually fades into port and malt sweetness at the back, with some cracked pepper, and a very thick mouthfeel overall. After dilution, the port starts to dominate, making it much sweeter overall, with some chocolate and roasted coffee beans joining the peat at the back.

This just doesn't quite work for me, but that's largely because it's the rare port cask whisky that hits the mark on my taste buds. If this had been a sherry cask, I think it would have been stellar, because that layer of fruitiness makes for a great counterpoint to Laphroaig's dry smoke. But if you happen to like both port casks and smoke, it should be a good pick.
Posted by Jordan at 8:04 AM