If one has been watching Bowmore over the last couple of years, it has become clear that the focus has shifted away from the core range and towards any number of limited and travel retail-only releases.

Following on the heels of Tempest, an ongoing series of 10 year old whiskies matured exclusively in first-fill bourbon casks, the distillery released another 'small batch' 10 year old whisky, this time matured exclusively in first-fill sherry casks. This was greeted with much fanfare and bottles in Europe nearly flew off the shelves as collectors snapped them up.

Perhaps unsurprisingly, Bowmore noted just how popular the first release was and has recently announced that there will be a second batch. My guess is that this will turn into a regular release, much like Tempest. But let's see how the first one did.

Batch #1 was bottled at a fairly hefty 56.9% ABV, without chill-filtration (though it doesn't appear to say anything about coloring). 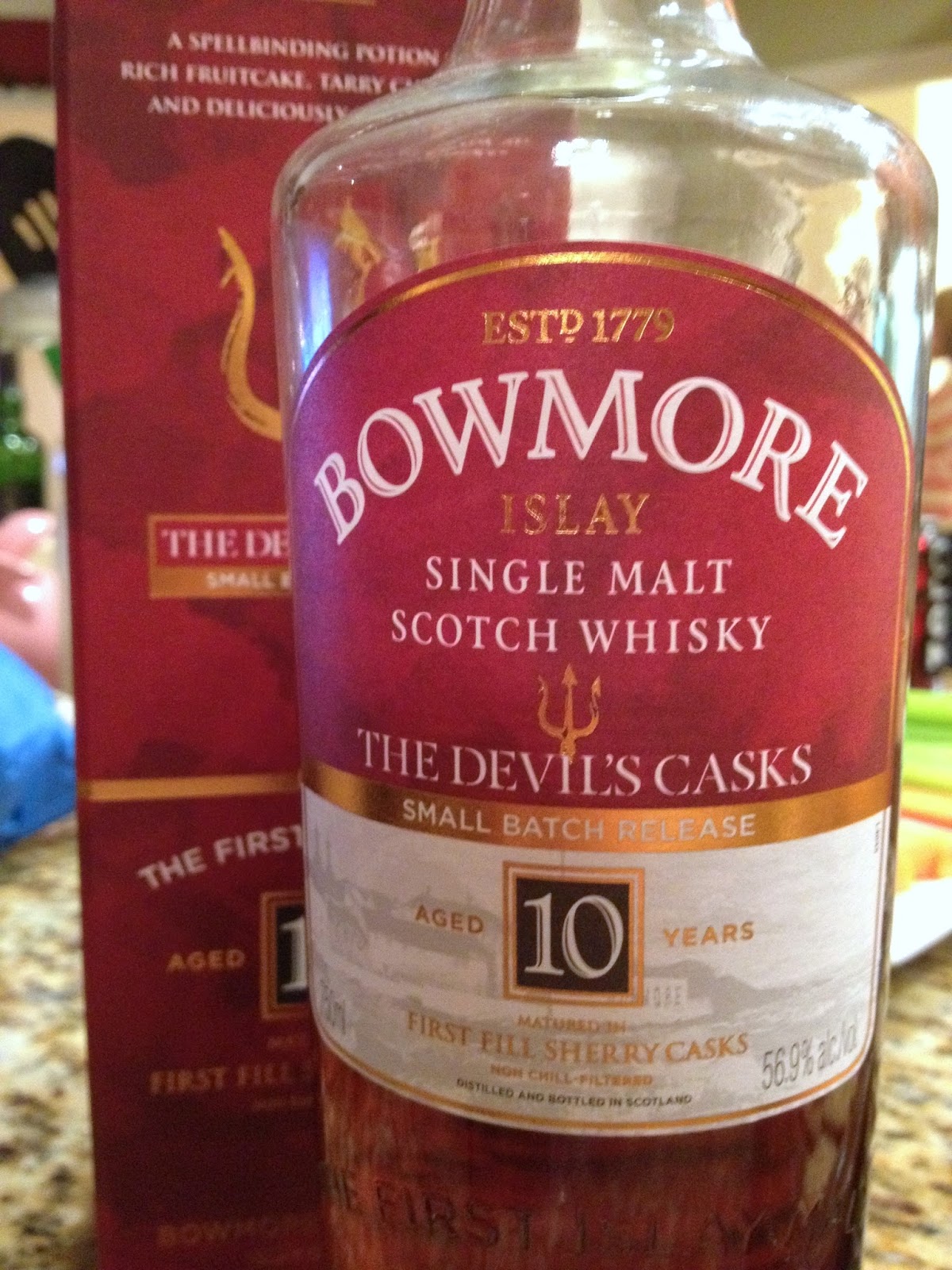 Nose: at first there is cigarette ash/tarry peat (more Laphroaig/Kilchoman/Bunnahabhain than classic Bowmore), moderate sherry with a rubbery/meaty/sulfurous edge, wood char, lumber yard oak, a bit of low tide seashore, fresh malt/hay, vanilla, dark chocolate - with time the peat settles down, the sherry becomes fruitier and more assertive, the focus shifts towards savory/salty malt, and some cinnamon toast notes pop out. After adding a few drops of water, it becomes much drier overall, the sherry, oak, and peat integrate nicely, with the seashore becoming seaweed/iodine, the oak becomes even fresher and more lumber-y, the cinnamon toast gains some brown sugar, and eventually the sherry becomes more savory than fruity and gives way to the malt, and the peat shifts into a more traditional Bowmore mode.

Taste: extremely sweet up front - a mix of pure sugar, malt, and sherry, a slightly sour edge, flipping into alcohol heat, ashy peat, wood char, dry oak tannins, rich sherry, and tarry Bowmore malt/peat notes - becomes drier and more malt-focused over time, with the sherry and peat tapering off a bit. After dilution, the opening gains some floral cherry syrup, the oak becomes more assertive and pervasive in a way that tempers the sweetness a bit - with that new lumber quality (it almost works in this context, but not quite) becoming clearer, the peat dims a bit, plus pine sap and black pepper emerge near the back.

Not quite sure how I feel about this one. It's definitely a wild ride and has lots going on to catch your attention, but I feel like it's given up some balance for the sake of fireworks. The opening is just a bit too sweet, though the flip to dry peat and oak is a nice touch.

While it would be nice to get the undiluted flavors with a bit less alcoholic heat, adding water seems to emphasize the youthfulness of the whisky, bringing out the lumber yard notes that I got in the rather unpleasant Exclusive Malts Bowmore I tried a while back. Given that they were distilled and casked at roughly the same time, I wonder if there was something about either the spirit Bowmore was making or, more likely, the casks they were filling at the time. Maybe recharred casks that let the spirit come in contact with fresh wood? In Devil's Casks, the sherry helps to paper over some of the oak, but I still find it hard to ignore.

More generally, the character of the peat makes me wonder if I would have pegged this as Bowmore tasting it blind, but that's not necessarily a bad thing. Bowmore has too often been focused on being the kinder, gentler Islay distillery, so it's kind of fun to see them being more bombastic. But in trying to shout, it's slipped over the line into being vaguely annoying. A bit more restraint would have moved this from 'pretty good' to 'excellent'. However, that's just my taste - sweet + peat seems to be a crowd-pleaser these days (see, for instance, the most recent batches of Laphroaig Cask Strength), so it's not my taste that they're catering to. Still, if you prefer your whisky to be a bit more reserved, I would probably give this one a miss, especially considering the price tag at retail, let alone on the secondary market.
Posted by Jordan at 9:29 AM