While I've tried quite a number of other malts from Springbank before, I had never tried their core release - the 10 Year.

As with all whiskies designated as Springbank (in contrast to unpeated Hazelburn and heavily peated Longrow), the malt is peated for 6 hours to give roughly 10 PPM phenols in the finished product. This puts it in the 'lightly peated' category, where the peat flavors are likely to be present, but usually won't smack you in the face.

The 10 Year is composed of a 60/40 split of ex-sherry casks and ex-bourbon casks. After the casks are dumped, the spirit is proofed-down to 46%, married for a while, then bottled without coloring or chill filtration.

This particular bottle is probably from the mid-to-late-2000s, before the most recent style of labels was introduced. I found it in a liquor store in Oregon and decided to pay a bit over the odds to see what it had been like a little while ago. 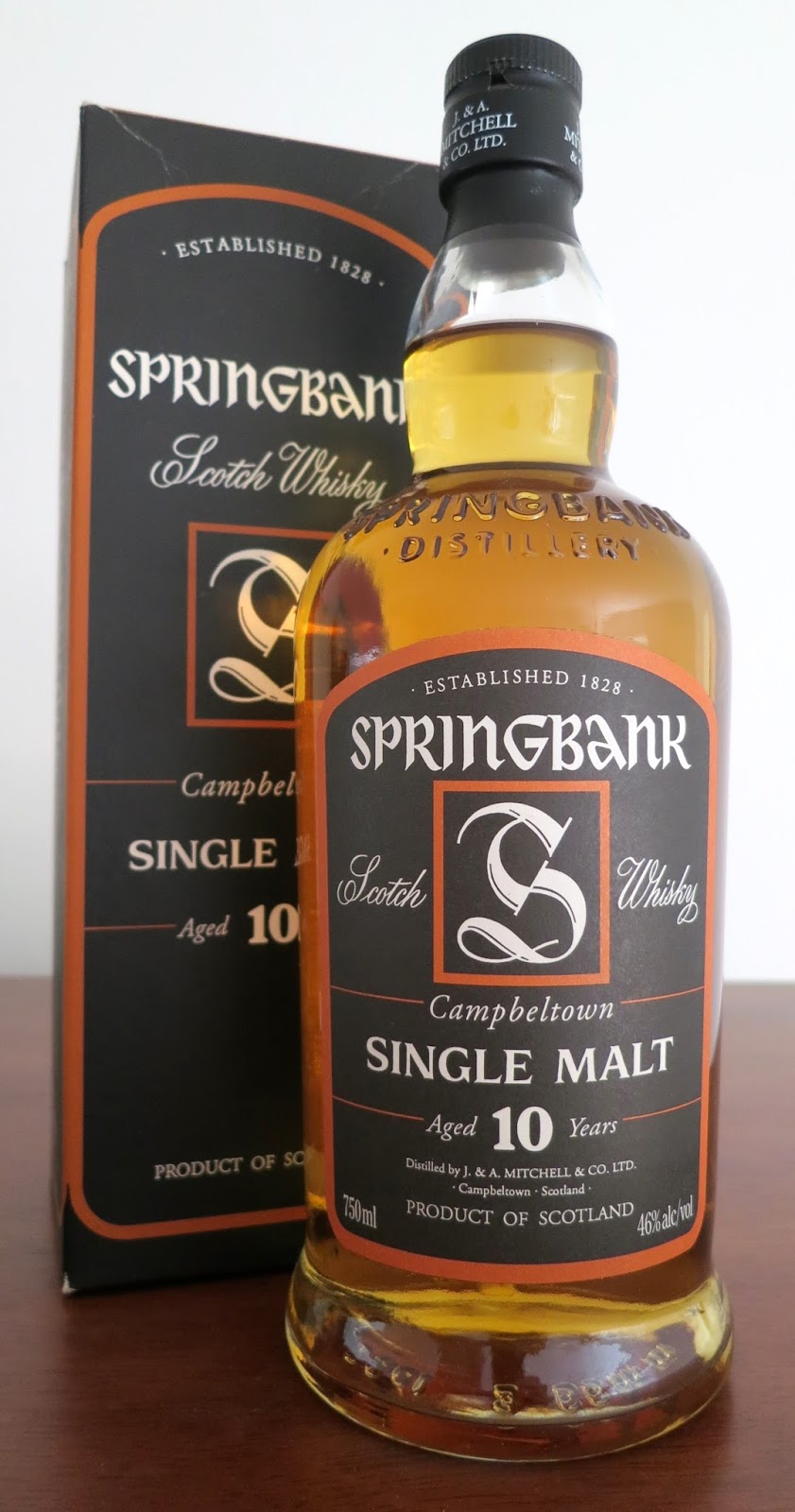 Nose: moderate sherry mingling with oily malt and peat, minty, floral perfume (violets and roses), creamy. After adding a few drops of water, the sherry retreats and becomes more dank, while the peat and malt move into the foreground, the floral notes remain - but are accented differently by the increased bourbon barrel character, some meaty chocolate notes come out,

Taste: thinner body than the strength would suggest, sherry/malt/floral sweetness throughout, warm caramel starting in the middle, segueing into bittersweet oak and mild oily peat near the back. After dilution, the body becomes a bit thicker, while the overall profile becomes more bittersweet, the sherry pulls back a touch, while the bourbon cask influence becomes stronger alongside more prominent oak, with some rich dark chocolate coming out near the back,

Finish: sherry and malt sweetness, floral, mild oak and peat, maritime notes wrapping around it all

This is a good introduction to the style, with everything that makes Springbank Springbank present - the oily character of the malt, the maritime notes, the light peat, and well-integrated sherry. If you can find a bottle for, say, $50 or less, I'd happily recommend it, especially if you already like sherried single malts.

With that said, I'd be a little happier if they flipped the ratio of sherry and bourbon casks. While the sherry is pleasant, I feel like it overwhelms the distillery a character a bit. I could also do with a bit less sweetness, but again, this is supposed to be the introduction to the brand, so it's not surprising that they would aim to make it more of a crowd-pleaser.

All of this makes me very interested to try the all-bourbon cask 10 Year/100-Proof, which I'm hoping will have more of the distillery character that I enjoy so much.
Posted by Jordan at 8:48 AM