This is the forth peated Benriach I've tried and the third in their series of peated cask finishes.

This is the most classic in the lineup, using Pedro Ximenez (PX) sherry casks to finish the whisky. PX tends to be intensely sweet and concentrated to the point of being almost syrupy, so it gives a thick wallop of sherry flavor. While PX can sometimes overwhelm the spirit, Benriach tends to have a deft hand with their cask finishes, so this one seems more restrained than it could have been.

As per usual, this was bottled at 46% without coloring or chill filtration. 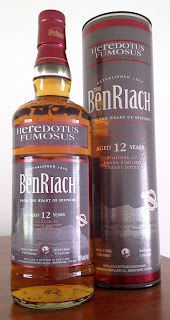 Taste: begins with malt and sherry sweetness with berry overtones that is quickly trumped by heavy oak tannins and inky peat, with vinegar and mocha in the background, and the savory elements of the sherry coming in behind, then slipping into something more malty near the back, with lemon and orange peel overtones throughout. After dilution, it becomes sweeter and more balanced, with the malt and sherry gaining ground against the oak and peat, floral notes appearing near the beginning, and some coffee grounds show up near the back.

To me the nose is the standout here. While I've found that most of Benriach's peated whiskies have quite a bit of oak, it's just in balance here, lending weight to the peat without being overwhelming. While Benriach doesn't have the coastal elements that are often associated with peated whiskies, its own spin works well in concert with the sherry, giving a somewhat dark and brooding feel neat, then switching to a brighter mode with a bit of water. The palate is a little simple in comparison, but doesn't fall flat either.

Ultimately, I think this is well worth searching out if you like peat/sherry combos. The character is very distinct from traditional Islay whiskies, but I don't think fans of Ardbeg or Laphroaig will be disappointed. It is, unfortunately, rather difficult to find in the US at this point, but retailers in the UK and EU should still have it if you're willing to go for international shipping.
Posted by Jordan at 8:49 AM