While Balvenie has historically been known for their delicate, unpeated malts, they ran experiments in the 2000s with aging their spirit in casks that had previously held heavily peated malts. The Islay Cask and Peated Cask releases were well-received and became highly collectable whiskies. Starting in 2002 the distillery began to produce batches of their own heavily peated malt at 30 PPM for one week out of the year. Over the last few years they have put out annual releases made from those early vintages. While the 2002 got mixed reviews, the comments about the latest release were more positive. 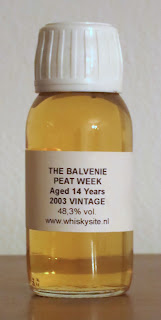 This whisky was aged exclusively in ex-bourbon barrels, then bottled at 48.3% without chill filtration but possibly with coloring.

I purchased this sample from WhiskySite.

Nose: dry, mossy peat smoke, herbal - simple but surprisingly pleasant. After adding a few drops of water it turns into wood smoke with a little cigarette ash (almost Kilchoman-y) plus something a little savory and malty underneath.

Taste: rather sweet up front, then flipping to dry peat and wood smoke, moderate amounts of oak, and darker fruits and berries near the back. After dilution it becomes much sweeter up front, the oak is amplified, and some mocha emerges at the back.

This reminds me more than anything else of Benriach's similar experiments. Under the circumstances this may not be a coincidence if their peat is coming from the same place. This whisky is more refined than something like Benriach Curiositas, but I'm not sure it's unique enough to make me want more. For the money Benriach Septendecim would be my pick of heavily peated Speysiders.
Posted by Jordan at 7:30 AM