Balvenie's Triple Cask range was created specifically for the travel retail market. Unlike most of their regular lineup malts, it's composed from three different cask types - first-fill ex-bourbon, refill ex-bourbon, and refill sherry - that are blended together rather than the cask finishing of Doublewood or Portwood.

After adding this whisky is proofed down to 40% with coloring and chill filtration.

Thanks to PDXWhisky for letting me sample this. 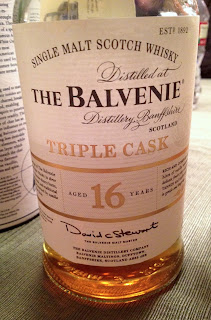 Taste: malt sweetness backed by mild American oak up front, light sherry influence with dried flowers and berries beginning in the middle, becoming gently tannic at the back, honey undertones throughout. After dilution it becomes sweeter up front, but kind of limp overall, with some corn notes at the back.

While on paper this should be my kind of whisky - a respectable age with fully matured casks blended together rather than finishes - the low strength saps some of what makes it good and the fact that it is targeted at the travel retail market tends to suggest that it's meant to have mass appeal, rather than providing any kind of challenge. The most notable difference between this and most other Balvenies is the clear presence of first-fill ex-bourbon casks, which make it more tannic. I suspect that would be even more noticeable if this was at a higher strength, which may be part of why it was bottled at 40%. At the same time what happens after adding water is interesting - the aromas are a little more complex, but less rich, which the flavors more or less fall flat. Overall I think was an interesting idea, but the execution leaves me uninspired. A 16 year old that was primarily refill rather than first-fill casks at 46% would probably be far more appealing to me.
Posted by Jordan at 7:30 AM