Right off the bat, I know essentially nothing about Game of Thrones. I tried to read the books, but quickly gave up and have never seen anything from the show beyond GIFs. So my only interest here is in the whisky itself.

This particular Lagavulin is an interesting choice in a number of ways. First, like the 8 Year released for the distillery's 200th anniversary, it has an age statement under ten years old. Lagavulin has traditionally put out a line about their spirit needing a significant amount of time to mature, which makes sense given their squat stills and wide cuts. The wild popularity of their annual 12 Year batch strength release has given something of a lie to that assertion, but it's still somewhat surprising that they have chosen to represent themselves with even younger releases over the last few years.

This whisky is bottled at 46%, possibly without chill filtration but probably with coloring. 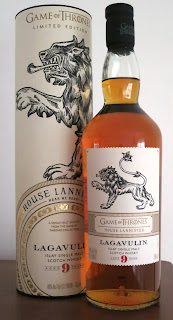 Taste: malt and cask sweetness up front, balanced with a moderate amount of oak tannins and some vaguely fruity overtones, fading into bittersweet oak with rising dry peat smoke beginning in the middle and flowing into the back end. After dilution the malty sweetness is amplified and pushes the oak tannins towards the back without becoming cloying, while the peat smoke becomes more incense-like at the back.

It's hard to understate how much this whisky has been a pleasant surprise. My mixed experience with the 8 Year made me a little bit wary, but how often do we get new Lagavulins? So I took the plunge and have been richly rewarded. Unlike its more rough hewn younger sibling, this straddles the line between it and the more refined 16 Year, albeit without the alcoholic strength of the 12 Year. But whatever, because this is half the price of the bruiser and less than the 16 Year in most markets.

While the nose is the star of this show, the flavors and finish are nothing to sniff at either. I've been skeptical about Diageo's ability to not screw up their own whiskies and this goes some way towards restoring my faith. Heck, I might even buy a second bottles, which almost never happens these days.
Posted by Jordan at 7:30 AM