My recent review of bourbon and rye whiskies got me thinking about new ways to incorporate whiskey into tropical drinks. While whiskey may not have quite the same range as rum, there still quite a bit of variety that can be mixed to provide new flavor combinations that are unlikely to be found in a single product.

Combine all ingredients, shake with ice and strain into a chilled old fashioned glass.

Apologies if I got the Gaelic wrong. The internet can only help so much. 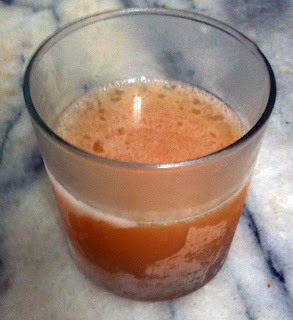 The Bushmill's Irish whiskey is something of an odd beast as it's aged in used oloroso sherry barrels for  some of its life, which adds a distinctive fruity raisin flavor to the usual single malt character. There's also just a hint of wine, which makes me think of the brandy notes in rhum agricole. Rittenhouse has tons of spicy character, somewhat analogous to a full-bodied Jamaican rum. So it made a certain amount of sense in my mind to put the two together into a sort of whiskey Mai-tai.

Ultimately, this is following the basic path of tiki drinks: start from a simple sour and elaborate by using multiple liquors, fruit juices and sweeteners to make a complex yet unified drink. Here we've started off with a simple whiskey sour, and elaborated on the ingredients to make something distinctive. By combining a floral, fruity whiskey with a funky, somewhat raw whiskey the drink has a number of different layers of whiskey flavor. The lemon juice gives it a bit of zip, while the orange liqueur gives it some sweetness and rounded fruity flavor. The orgeat has a distinct nuttiness that syncs up well with the whiskies.

While a bit of a departure from the original, the inspiration for this drink came from the Waitiki corner of the Cocktail Journal. I wanted to find a way to integrate the smoky flavor of scotch, a notoriously difficult liquor to mix with, into a tiki drink. Again, I'm far from the only person to head in this direction, but I think the results speak for themselves.

Unsurprisingly, the scotch tends to dominate the nose. There's a heavy dose of peaty-smoke, though a healthy whiff of cinnamon isn't too far behind. The smoke is much more subdued on the tongue. There is a distinct grainy flavor from the whiskies, with a rounded fruitiness from the citrus and passionfruit and various spicy notes from the syrups. Altogether a quite pleasant drink to sip. Especially if you're like me and have an organic chemistry problem set to wrap up.

While I should be returning to the world of rum in the near future, it's been fun to see how far I could push distinctly American, Irish and Scottish spirits into the faux-tropical world of tiki.
Posted by Jordan at 9:01 PM