Tiki Classics: The Mai-Tai as Foundation

It seems to be a requirement of cocktail blogging that at some point, you will write a post about the mai tai. Perhaps several. I've even mentioned it once before. But really, there's a good reason that it comes up so often.

From a fairly simple set of ingredients, the mai tai is much greater than the sum of its parts. A combination of rum, lime, orange liqueur and orgeat comes together with almost unmatched depth and complexity. And that's without too many of the usual tiki drink tricks, like multiple juices and highly spiced syrups and liqueurs. 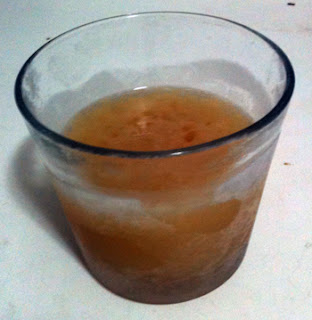 All of that can be attributed to the genius of Victor 'Trader Vic' Bergeron who invented the mai tai (yes, I come down on that side of the great Mai Tai Debate).

Combine all ingredients, shake with ice and strain into a chilled cocktail glass, either up or over crushed ice. Garnishing with a mint sprig is traditional and does add a little something to the drink.

The basis of this drink is obviously rum. Originally developed with Wray & Nephew 17 Year Dagger rum, a bottle of that will set you back as much as a new luxury car, so adaptations have to be made. The general consensus seems to be that a combination of an aged Jamaican rum and an aged Martinique rhum agricole best approximate the original flavor. However, there are quite a number of other variations that will work as well.

If you're aiming for something along the classic lines, your options are a significantly more limited on the Jamaican rum side. My go-to rums in this category are Appleton V/X and Estate Extra plus Smith & Cross. The Appleton 12 Year is best on its own, but I usually go for some split between Appleton V/X and S&C as they both bring some nice funk to the table. Both because of proof and the fact that it's made from pure pot still rums, the S&C will make itself strongly present, even at 0.25 oz, so go easy with the pour. There's also Coruba, but its strong burnt sugar flavor will also tend to dominate the drink, so it's not something I tend to reach for when I'm making mai tais. And while there is still a Wray & Nephew rum on the market, it's an unaged firebreather that really isn't what you're looking for in a mai tai rum.

On the sugar cane rum side of the equation, there's quite a bit more to choose from. First up, the official Martinique rhum agricoles. While I and others have sung its praises before, Clément VSOP isn't my favorite here. For whatever reason, it seems to be hiding its light under a bushel in this drink, so I don't want to waste its deliciousness. Rhum J.M. and Neisson Elévé Sous Bois are both solid and won't set your wallet back too far, but they are also pretty stiff and may be a bit much depending on your opinion of rhum agricole. Next on the list are non-AOC sugar cane rhums from other islands. Barbancourt is an obvious choice, especially as its price point is far below that of the Martinique rhums. Another good choice is Westerhall Plantation rum, which is made with both cane juice and molasses rums. It's fairly light, but will provide a nice backup to whatever Jamaican-style rum you want to use. Lastly, Mt. Gay Sugar Cane Rum, which is oddly nothing of the sort. As I mentioned before, this is a molasses-based rum that magically manages to express many of the characteristics of a sugar cane juice rhum. Sadly it's not being made any more, but if you can find a bottle it does work wonders in a mai tai.

If you want something a bit lighter, I also like a variation with Banks 5 Island (has some Jaimaican rum in the blend and the Batavia Arrack brings some really nice funk to the table) and Clément Première Canne (a nice but fairly mellow rhum agricole blanc). Makes for a good summer mai tai.


What's amazing about the mai tai is how adaptable it is to other spirits. However, one does have to keep in mind that the drink was built with rum in mind, so some subtle tweaks may be necessary. The whiskey version of the mai tai was known as the Honi Honi in Trader Vic's restaurants, though this was a simple substitution with 2 oz of one kind of bourbon. While this drink works quite well, even with something as simple as Jim Beam white label (I had an excellent one the last time the Teardrop Lounge hosted a tiki night), it feels like there's room to play with this formula. The first thought in my mind was, "what whiskies will approximate the flavors of Jamaican and agricole rums?". This is kind of a tricky thing. There aren't too many whiskies that have the same kind of pot still funk that are the hallmark of Jamaican rums. By the same token, Martinique rhums have a rather unique flavor that is often (in my mind) reminiscent of brandy. So there are two different routes available: pick what seem like their analogs within the whiskey world (funky and fresh) or most faithfully recapitulate those flavors. For the first, I would suggest the most robust whiskey you can get your hands on and a rye whiskey. If you can't get funky, at least get bold. Bulleit, Elijah Craig 12 Year or Ezra B Single Barrel would all be good choices for the first that won't break the bank or make you cringe to mix them. As a Martinique replacement, I lean towards rye whiskey because it seems to possess both the semi-obscure peculiarity of Martinique rum and flavors that remind you that it's an agricultural product. For the second route I would stick with a bold bourbon, but add a sherry-cask aged Scotch whisky (I've tried this with Aberlour 12 Year to reasonably good effect), which will have the wine-like flavors that one can find in rhum agricoles. Both are good, but which you like better will depend on your personal tastes.


This is another mai tai variation that has an established history as the Pinky Gonzoles. But again, this is a fairly simple sub of 2 oz of a single kind of tequila. While all well and good, I prefer to use 1 oz of an añejo tequila like Sauza Hornitos and a reasonably funky reposado like Cazadores. That way you get both the aged barrel flavors of caramel and vanilla of the añejo and the funky agricultural flavors from the younger tequila.


Here's where we diverge from the beaten path. Gin is somewhat more divorced from its agricultural roots, with the exception of maltier gins like Dutch genevere. But you can still make an excellent gin-based mai-tai. For depth, you're probably going to want some kind of a barrel-aged gin. I went with Ransom Old Tom, though it at least the bottle I have needs to be used sparingly (~3/8 oz) as its somewhat overwhelming cardamom flavor can swamp a drink. For the balance of the spirit, I went with Aviation and Hendrick's, both solid, not too juniper-y gins that will still give the drink a nice snap.

So there you have it. The mai tai is a true classic, both in its original form and in the derivatives that were spawned from it. While falling on hard times for much of the late 20th century, many are new recognizing how good this drink can be when hewing to Trader Vic's formulation. A few simple ingredients turn into something downright magical.
Posted by Jordan at 8:20 PM