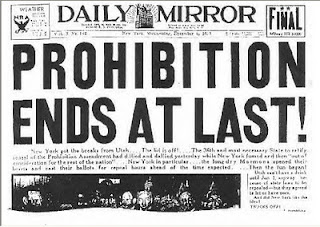 Once again it's time to celebrate Repeal Day, as December 5th marks the end of Prohibition and the return of sweet, sweet liquor to America.

Prohibition represented a dark day in American history, when we collectively decided that people shouldn't be able to make their own decisions about what to consume and went so far as to put it into the Constitution. Now admittedly, as I've mentioned before, America was an awfully hard-drinking nation back in the 19th century. The attendant problems of alcohol consumption drove many Progressives to advocate for temperance as there was a wide-spread belief that alcohol was at the root of many societal ills and that sobriety would lead to a veritable utopia. Some worked through social pressure, others by force of law.

Obviously we all know how well that worked out. There's strong evidence that alcohol consumption increased during Prohibition compared to before enactment of the law. Crime increased as the mob gained power, money and influence. Respect for the law decreased, both because of the manifest absurdity of Prohibition and the woeful ineffectiveness of local, state and federal enforcement.

It took the Depression and the desire for new tax revenues to finally turn the tide and Prohibition was officially repealed on December 5th, 1933 when Utah (who'd a thunk it?) ratified the 21st Amendment, crossing the three quarters threshold needed to enact the statute.

So raise a glass to celebrate a small return to sanity and personal responsibility. I'm currently enjoying a glass of rum distilled here in the good ol' U.S. of A.

Many thanks to Jeffery Morganthaler, who created the Repeal Day holiday. If you like, you can personally thank him by dropping by Clyde Common where he currently manages the bar.
Posted by Jordan at 9:20 PM