While some of the small batch bourbons and scotch whiskies I've been posting about lately have been great, sometimes you want a whiskey that's both tasty and easier on the pocketbook. Thankfully, bourbon remains one of the great values in spirits, so there are some really great choices out there on the lower shelves. 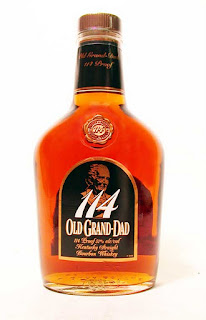 
Nose: delicious multi-grain porridge with brown sugar and cream, a hint of vanilla and a surprisingly small amount of alcohol, which becomes a bit sweeter with water


Taste: sugary sweet up front, with an intense burst of rye chili spiciness mid-palate all the way to the back of the throat, which becomes hot cinnamon candy, mellowing slightly to reveal more sweet vanilla with water

Finish: long, with gobs of rye spice and a healthy burn

This bourbon is truly magnificent. It was named by Raymond Hayden in the late 19th century after his grandfather Basil Hayden. Basil was a Catholic Maryland colonist who moved to Kentucky where be began distilling. Basil is purported to have used more rye in his bourbon mash than many other distillers of the time. The Hayden distillery passed through a number of hands over the course of the 20th century before becoming part of Jim Beam. The same 30% rye, 60% corn, 10% malted barley mash bill used to make OGD is also used in the swankier but lower proof Basil Hayden's bourbon, which is older but costs at least twice as much as the Old Grand Dad. This is the stiffest of the Old Grand Dad line, which includes 86- and 100-proof expressions. The lower proof versions look like they belong on the bottom shelf, but the bottle and packaging of the 114-proof version is much snazzier, even though it commands a fairly small premium over its brethren. None of the bourbons in the OGD line have age statements, but it's likely that they're aged somewhere between 4 and 6 years. This whiskey is highly recommended, especially if you're a bourbon drinker interested in moving towards the rye side. 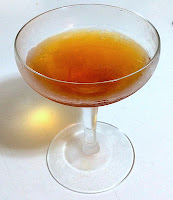 This is a pretty tasty drink. I was inspired by the Liberal cocktail, which I didn't have the right ingredients to make. The OGD provides a nice bourbon backbone for the drink, with the graininess being most apparent in the smell. The lemon oils integrate well with the orange liqueur and bitters, with the allspice dram and Angostura bitters similarly linking together. Somehow all of these elements combine to come up with a bit of chocolate emerging from the mix. I think this would be slightly better if it was just a bit drier, but that would require using unsweetened orange liqueur liquor in place of the normal sweetened variety. A heavier hand with the bitters would also help the balance, but that would also change the flavor balance more drastically. But even as is, I'm pretty happy with how it turned out.

Taste: mildly sweet up front, with corn and rye mid-palate becoming strongly spicy with chili heat from the rye, which shifts to brown sugar at the beginning and creamy rye with subdued spiciness after the addition of water

The Buffalo Trace Distillery is owned by the Sazerac Company and produces such greats as the eponymous ryes, Eagle Rare, George T. Stagg and William LaRue Weller bourbons. However, they haven't skipped on quality when it comes to their basic bourbon. The name refers to the tracks from buffalo herds that would remain visible for some time after they had passed. This whiskey is one of my favorites and easily competes with bourbons that cost an extra $10 or more. Clocking in at a solid 90-proof, it also has no age statement, but shows the effects of plenty of time in the barrel. This is definitely one to keep around the house as it's good both as a sipper and as a base for excellent bourbon cocktails. 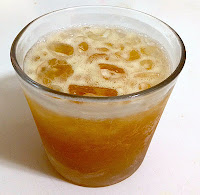 Along with the Bourbon Special, this is one of my favorite bourbon-based tiki drinks. It could easily be built as a rum drink and provides a nice bridge into this more obscure corner of the tiki world. Buffalo Trace works more as a supporting character in this drink, giving it a solid bourbon-y background while letting the other ingredients shine. It shows up again in the finish to remind you that it's still a necessary element of the drink. The grapefruit gives the drink a bit of bitter snap, while the lime and sweeteners balance each other out. The falernum dances around everything else with its spicy notes. A very pleasant sipper.
Posted by Jordan at 10:42 PM