The Arran Distillery has the distinction of being one of the newest scotch whisky distilleries, having opened only in 1995. Located on the Isle of Arran off of the west coast of Scotland, this was also the first legal distillery built on the island in 150 years. This doesn't mean that there wasn't any whisky being produced on the island during that century and a half, it's just that it was all illegal. The distillery was established at its current site due to a convergence of favorable conditions including excellent water and a climate warmed by the Gulf Stream, which makes islands on the west coast of Scotland dramatically warmer than those on the east coast.

But what  really matters is how the whisky tastes. 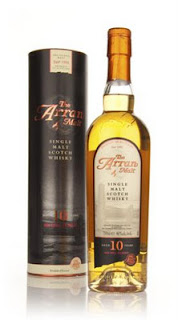 Taste: intense honey up front, a spicy mid-palate followed by a touch of sherry, citrus and peat, with mint throughout, which becomes somewhat more robust and gains a creamier mouthfeel after the addition of water

Finish: short, with malt and sherry, transforming into nutmeg and peaty chocolate after adding water

One of the great things about Arran is that all of their whiskies are bottled at at least 46% and are un-chill filtered. The slightly higher than normal proof gives them plenty of room for adding water. Being un-chill filtered leaves a lot of the tasty oils that also contribute to the wonderful mouthfeel of this whisky.

What I find most interesting about the Arran 10 Year is the obvious peat notes, which are odd given that the malt is unpeated. However, as the peat seems to be more vegetal rather than being smoky, my guess is that this is due to the water, which the distillery claims is naturally filtered through peat, rather than the malt. The brininess is another interesting feature, which isn't something I've experienced before in whisky, though it does get talked about frequently with reference to Islay single malts. Maybe I'll actually have to try one of those, though hopefully I can find one that isn't a complete smoke bomb.

Overall I'd say that this single malt shares a fair number of flavor characteristics with another one of my favorites, Highland Park 12 Year. However the Arran is a little bit less aggressive and adds some other flavors to the mix. As the gift pack is currently running right around $40 here in Oregon, it's even a pretty good buy. As the Arran 14 Year has been discounted down to a measly $50, I also picked up the older bottling and should be reviewing it soon.
Posted by Jordan at 7:49 PM