I reviewed the younger 10 Year whisky from Arran a few months back, so now it's time for it's elder sibling. I got very lucky and was able to get my hands on these two whiskies for very reasonable prices because the state of Oregon has a bit of a glut of Arran and decided to heavily discount them. The 14 Year runs in the mid-70s most of the time, but has been available for only $50 for the last few months. Unfortunately that comes to an end on March 1st, so if this sounds like a scotch you'd like to try and you live in the NW, I'd suggest picking up a bottle sooner rather than later.

Like the 10 Year, the Arran 14 Year is bottled at 46% without chill filtration, giving is a decent amount of heft and a nice mouth feel. It's somewhat inconsequential, but I have to hand it to the people who do the packaging for Arran. The standing stone motif is a nice touch. It's a very good balance between showy and simple, which lets it stand out on the shelf without overreaching. Nicely done. 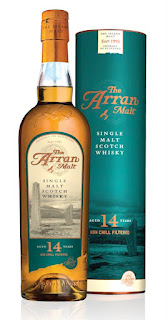 Taste: a burst of citrus, raspberry and mint up front, which glides into sweet chocolate malt and dark berries mid-palate and back, with allspice, cinnamon, sherry, peat and pepper leading into the finish, which becomes more intensely honey sweet throughout the palate and diminished peat influence after dilution

This is a really excellent whisky. With that said, I think I actually like the Arran 10 Year a bit better. The 14 Year cranks up the sweetness of the 10 Year while losing some of the peat and other Island influence that provided such a nice balance in the 10. If you live in Oregon or can make it here by the end of the month, it's mostly going to be a matter of personal taste. There's only a $10 difference between the two expressions right now. But once March rolls around, the 10 Year will become a much better deal, especially if you order it online.
Posted by Jordan at 9:21 PM