Cruzan rum is produced on St. Croix in the U.S. Virgin Islands, with a history stretching back to 1760. Except for a brief spell during Prohibition, it has operated continuously since the 18th century. Because of its long history with the United States (St. Croix was one of the first places to acknowledge the fledgling United States during the Revolutionary War), it is one of only two rum distilleries to be included on the American Whiskey Trail. Though the company has passed through numerous hands over the centuries, it has continued to be managed by members of the Nelthropp family for eight generations. It is one of the largest rum distilleries in the Caribbean, with the capacity to distill 12,500 gallons of pure ethanol a day. This is in no small part due to the fact that the USVI are granted a tax exempt status by the United States government, giving them a significant price advantage when compared to many other rum producers.

Cruzan produces all of their rum from imported molasses (there are no sugar mills on the island. Distillation is done with column stills, running their product up to 94.5% alcohol (0.5% away from the limit imposed by water/ethanol forming an azeotrope when it would be neutral spirits). This is why their products tend to be so smooth (nasties like methanol, acetone, and fusel oils have been almost completely removed).

It also means that most of the flavor of their rum comes from their barrels. Aging is carried out entirely on-site, with a capacity for tens of thousands of barrels at a time. Barrels are all ex-bourbon, though oak chips are also added to barrels intended for heavier rums. This is honestly kind of shocking to me, as it sounds a lot like the tricks that microdistillers are so often derided for. That a large distiller uses exactly the same kinds of methods makes you wonder what all the fuss is about.

Cruzan's Single Barrel rum is not a single barrel in the usual sense. Instead, 5-12 year old rums that have been maturing in standard ex-bourbon barrels are vatted into 'new' (it's unclear what the scare quotes mean) to marry for a year before bottling. While this produces a consistent product, it feels like a deceptive practice, removing the pleasant surprises that usually single barrel bottlings. They do list the 'barrel number' on the next of the bottle, but I have to wonder how much it really matters.

Taste: smooth and buttery (diacetyl), warm caramel and sugar cookies throughout, cinnamon and pepper near the front, synthetic vanillin near the back, light oak tannins, berries, and honey into the finish. After dilution it becomes a bit flatter and more integrated, with the addition of some orange peel and cane, but the bitterness at the back becomes unpleasantly strong.

Finish: caramel and a bit of oak

Cruzan Single Barrel was the first rum I ever bought and I honestly have to say that it was a good choice. At the time my palate was still developing and it seemed indescribably oaky. With several more years under my belt, it now seems almost completely tame (though the increased bitterness after dilution might have something to do with those early impressions). I'm a bit sad that Cruzan decided to move away from their classically styled bottle (the one I have pictured) to something more 'modern', but their marketing has been pushing them towards flavored rums, so I'm not surprised that they would want to update their upscale product as well. As I mentioned above, I feel like the 'Single Barrel' moniker is a sham attempt to capitalize on the growing popularity of single barrel scotch and bourbon. Most aged spirits are vatted for a period of time to let the various components form a proper melange, so what is put in the bottle is just a fairly standard NAS rum with a bit of age on it.

Quibbles aside, I would still say this is a decent rum to pick up. There are lots of other options in the price bracket that would do as well (one of which I will be reviewing in the near future), but it is a good choice when you want to dip a toe into the world of rum. It's sweet, smooth, and utterly pleasant. While I would love if they actually started releasing true single barrel rums, I would be satisfied by Cruzan not trying to trick consumers into thinking that they're buying something they're not.

As is my wont, I wanted to mix up a cocktail with this rum. 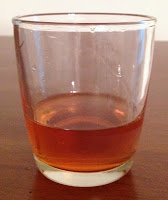 Combine all ingredients, stir with ice for fifteen seconds, then strain into a rocks glass.

The nose is rich with rum, palm sugar funk, and a hint of raspberry. The sip is sweet in a restrained fashion, slowly easing into bitter notes and receding with brighter notes of raspberry.

Much like the rum itself, this drink is just plain easy drinking. The palm sugar syrup and bitters add new dimensions to the rum while the raspberry notes give it some lift. However, it doesn't stray too far from its base spirit, retaining the approachable character and sweet balance of the rum.
Posted by Jordan at 9:16 AM