I've been looking to try this whisky for a while. Between the decent but not fantastic CV expression and delicious cask-strength Hazelburn 8 YO Bourbon Cask I tried a few months ago along with the 8 year old Sauternes Cask and 12 year old versions that I have sitting unopened in my liquor cabinet, I was really interested to see what this whisky would be like. Once again, I trekked down to the Highland Stillhouse for a drink.

Hazelburn is Springbank's newest single malt - production began in 1997 with bottling of the 8 year old beginning in 2005. It is made from unpeated malt which is then triple distilled. This production process means that it shares much in common with other triple-distilled whiskies from the Scottish Lowlands and Irish pot still whiskeys. The 8 year old expression is made up of a 60/40 split of bourbon cask and sherry cask whiskies, which are vatted before dilution and bottling at 46% ABV.

Taste: wood sugar and vanilla up front, bittersweet sherry emerges mid-palate and continues through to the back, then malt, light pepper, and bitter oak. After dilution, the pepper becomes more expansive.

Finish: bitter wood and sherry, with pepper and cinnamon/allspice after dilution. 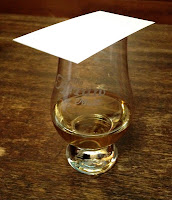 I'll have to admit that I found this less compelling than the cask strength Bourbon Cask. While the sherry was rather well-integrated (this adds to my belief that marrying bourbon-cask and sherry-cask whiskies is superior to cask finishes), I think I prefer the purity of straight bourbon cask Hazelburn whisky. The classic Springbank salt - which is one of my favorite features of the distillery - was present, but I felt like I had to hunt for it. However, it was still tasty and a significant improvement on the CV version as the wood in the 8 year old was much less aggressive. This reinforces my guess that the CV had some over-oaked casks in the mix, as the preponderance of the CV is largely made up of younger malt which should be similar to the 8 year old. For a slightly different perspective on the 8 year old, you should check out Michael Kravitz's review.

The 8 year old expression of Hazelburn is shamefully overpriced in the States, but you can pick it up from Master of Malt or The Whisky Exchange for a little over $50 with shipping. At that point I would say that it's a much more reasonable choice if you want something that's lighter without being boring.
Posted by Jordan at 7:45 AM