I've covered some of the younger Longrow single malts before, namely the CV and 10 Year releases. This the first one that I have a full bottle of, so it's been nice to go through pretty much the whole thing before forming a final opinion. As with all Longrows, this whisky is made from heavily peated (~50 PPM) barley. It spends its whole life in ex-sherry casks (though I have seen other statements that it's a blend of bourbon and sherry casks or bourbon cask whisky finished in sherry casks - but this may just be different releases), putting another layer on top of the usual Springbank malt and salt. 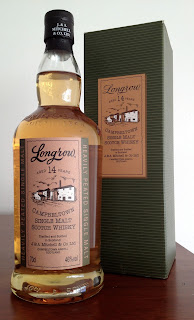 Taste: sweet and rounded sherried malt with just a hint of sourness and bitterness up front, slowly wending its way into a pool of vegetal peat, black pepper and oak. After dilution the palate becomes much more malty sweet, with more creaminess and the sherry retreating.

I will give the same caveat that I give for most Longrows - don't expect a big Islay smoke bomb here. Especially on the nose, the peat isn't going to beat you over the head with phenols. It's spice rather than the main course. With that said, I really like the interplay of sherry and peat in this whisky. While initially sweet, especially on the nose, it has excellent balance. This is head and shoulders above the 10 Year I reviewed a while back. It's a much more cohesive expression of what Longrow can be. The sherry gives it more weight, but doesn't go so far as to smother the malt. And despite the extra years, it still seems very fresh and there's actually more pronounced peat than in the 10 Year (though that may have been a function of the sample I had). Overall Longrow 14 Year is a very, very enjoyable whisky. And while it's generally overpriced in the US ($100+), it can usually be purchased at much more reasonable rates from the UK, e.g. Master of Malt and The Whisky Exchange (I accidentally bought a bottle from each of them due to different naming conventions).

Because I happened to have some on hand, I was curious to see how the 14 Year compared to one of its younger brethren. Longrow CV is noticeably less mature - the malt and peat nearly jump out of the glass and have that bright agricultural character you get before the barrel really leaves its mark (e.g. Kilchoman). There are still a few feint-y notes from lighter compounds that haven't had enough time to evaporate or be transformed into something else, but it gives the whisky a pleasant edge. It's very green and vegetal rather than smoky, which makes me think of open fields rather than fire and ash. That wonderful Springbank saltiness is still there, which provides such a delicious accent to the other flavors. With time some oak tannins and meaty notes emerge to give the spirit a little more weight, but the focus is always on the inputs - malt and peat. The various finished whiskies that went into making this expresion will peek out, but are more bit players than stars of the show. What's nice is that the shared lineage between these two whiskies is clear but the emphasis is different. The 14 Year is more august, but the CV has youth and vitality behind it. Which I enjoy more really depends on my mood.
Posted by Jordan at 7:27 AM