BenRiach is a distillery located on the north side of the Speyside region, near Longmorn (see Malt Madness for the full story about BenRiach's connection with Longmorn).

For the purposes of this review, the interesting bit of history came after BenRiach was purchased by Seagram's in 1977. In the early 80s, the distillery began to distill runs of heavily peated (50 PPM) malt in the style of Islay whisky. This was done because of the decreasing supply and increasing cost of Islay whisky at the time. As heavily peated whiskies are a key component in many blends and Seagrams did not own any distilleries on Islay, they wanted to bring some of the production in-house to ensure supply.

When BenRiach was purchased from Chivas in 2004 by Billy Walker, there was a significant stock of aging peated single malt in the distillery's warehouses. It has since been released in a number of different ages, ranging from 10 to 21 years old. BenRiach has also taken the somewhat peculiar step of naming all of their peated single malts with Latin names.

Today we'll be looking at the youngest peated single malt from BenRiach, which is bottled at a solid 46% without chill filtration. 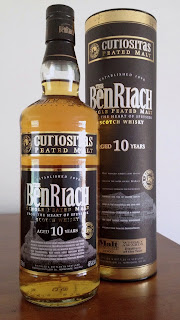 Nose: vegetal/smoky peat that seems particularly fresh - like walking through a forest in spring where green wood is being burned, gently floral, rich bourbon barrel notes, salty playdough, a mishmash of fruit (particularly berries), light vanilla. After adding a few drops of water, the peat becomes softer and integrates with the malt, the floral and fruit notes integrate, some mocha notes pop out, and the saltiness gets toned down a bit

Taste: lots of malt and bourbon sweetness up front and in the middle, a combination of peat, oak tannins, pepper, and wood smoke/ash come in quickly along with something a bit medicinal, muddled fruit around the middle, becoming fairly bitter near the back. After dilution, everything layers on top of each other instead of coming in distinct phases, the peat gets a bit more rubbery (especially at the back), and it's a bit flatter and less sweet.

This one is a bit of an odd duck. The character of the peat is very different than anything else I've tried - it's much more like fresh vegetation, with a sense of living things rather than the more smokey or decayed vegetation one gets from a lot of Islay whiskies. However I think it can stand up to any of the big Islay peat bruisers - if you like Ardbeg or Laphroaig this should definitely be on your list. At the same time, it reminds me of Ledaig 10 Year, because of the heavy bourbon barrel influence. That helps to give it plenty of sweetness and depth to counteract the huge blasts of peat.

Overall, I think this is a good whisky to pick up if you already like peat - it's something different to challenge your palate. However, it's not what I would go for if I was trying to introduce someone to peat or whisky in general. The flavors are just a bit too peculiar.

As a last note, this makes me really interested to try the various cask finishes that BenRiach has done with their younger peated whisky. It's a solid base of smoke on which to layer other flavors, but given my skepticism of finishes, I'm going to moderate my expectations.
Posted by Jordan at 8:27 AM