While I've reviewed Bruichladdich's previous 10 and 12 year old whiskies before, those were both made from stock inherited when the distillery was purchased by Mark Reynier in 2000. The new "Laddie" 10 Year represents a new phase for the distillery as it is composed entirely of spirit made since 2001 under the new crew.

This obviously created a lot of excitement when the new 10 Year was first released in 2011, garnering Whisky Advocate's "Islay Single Malt of the Year" award. With that kind of hype and having enjoyed the previous versions, I had high hopes when I opened this bottle. 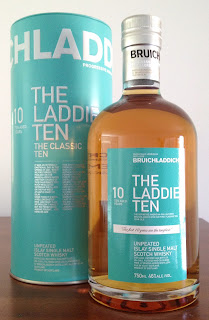 Taste: begins with malty sweetness and a bit of citrus, then bittersweet peat, pepper, and oak slam in, then it becomes more malty with dank sherry in the middle, then swings back to the peat/pepper/wood combo with even more oak. After dilution, there's now a thick layer of malty/sucrose sweetness throughout, though it's still overlaid by the bitter elements, it becomes a bit of a jumbled mess in the middle, and the oak notes becomes somewhat off.

What just happened? Where's the sweet, clean Bruichladdich that I was expecting? This is just dirty. There's an intense peat reek that's hard to banish and never seems to fit. I know it's not just sensitivity to peat, because I've enjoyed plenty of peaty drams before. But this whisky seems all wrong to me.

There seems to be significant batch variation - some, like Scotch Noob, seem to have gotten the same one I did. Others got what can only be cleaner batches. With that said, I tried some at the distillery in September and it still tasted like the same mess. People who I really respect, like Ralfy, absolutely loved it. And as I noted earlier, this whisky received all sorts of awards when it was released, so I'm left rather confused.

I really want to like Bruichladdich - even after the sale to Remy, they still have a great story. But this doesn't bode well for future releases - if this is what they have to work with, I'm not sure age is going to improve it much. However, I've now acquired my own bottles of the old 10, 12 and 15 year olds that were made from old stock, so I'm going to go back and see if it's just the new stuff they've been making that doesn't sit well with me or if I just need to give them a pass entirely. Either way, it's quite the quandary.
Posted by Jordan at 9:23 AM