My last full day on Islay was, to put it mildly, gorgeous. I also had nothing planned except a tasting at Caol Ila in the early afternoon, which, after the combination of being sick and rushing around for the previous couple of days, was very, very welcome.

I had seen signs for Finlaggen Castle not far from where I was staying. So, after tucking into breakfast, I took a walk down the road.

The gravel road wound up from the highway, slowly wending behind some low hills. I had to carefully cross an number of cattle grids, which were a bit treacherous on foot. Additionally, the road was liberally scattered with sheep droppings, which were, if anything, even worse. The offending sheep were also present and the bleating they raised as I passed by, especially from the rams, was eery and alien. Thankfully they all got out of my way, but it didn't seem like a sure thing.

The vista that opened up was simply stunning. I can see why the Lord the Isles decided to build his castle on the spot. Finlaggan is a gorgeous loch surrounded by low green hills. 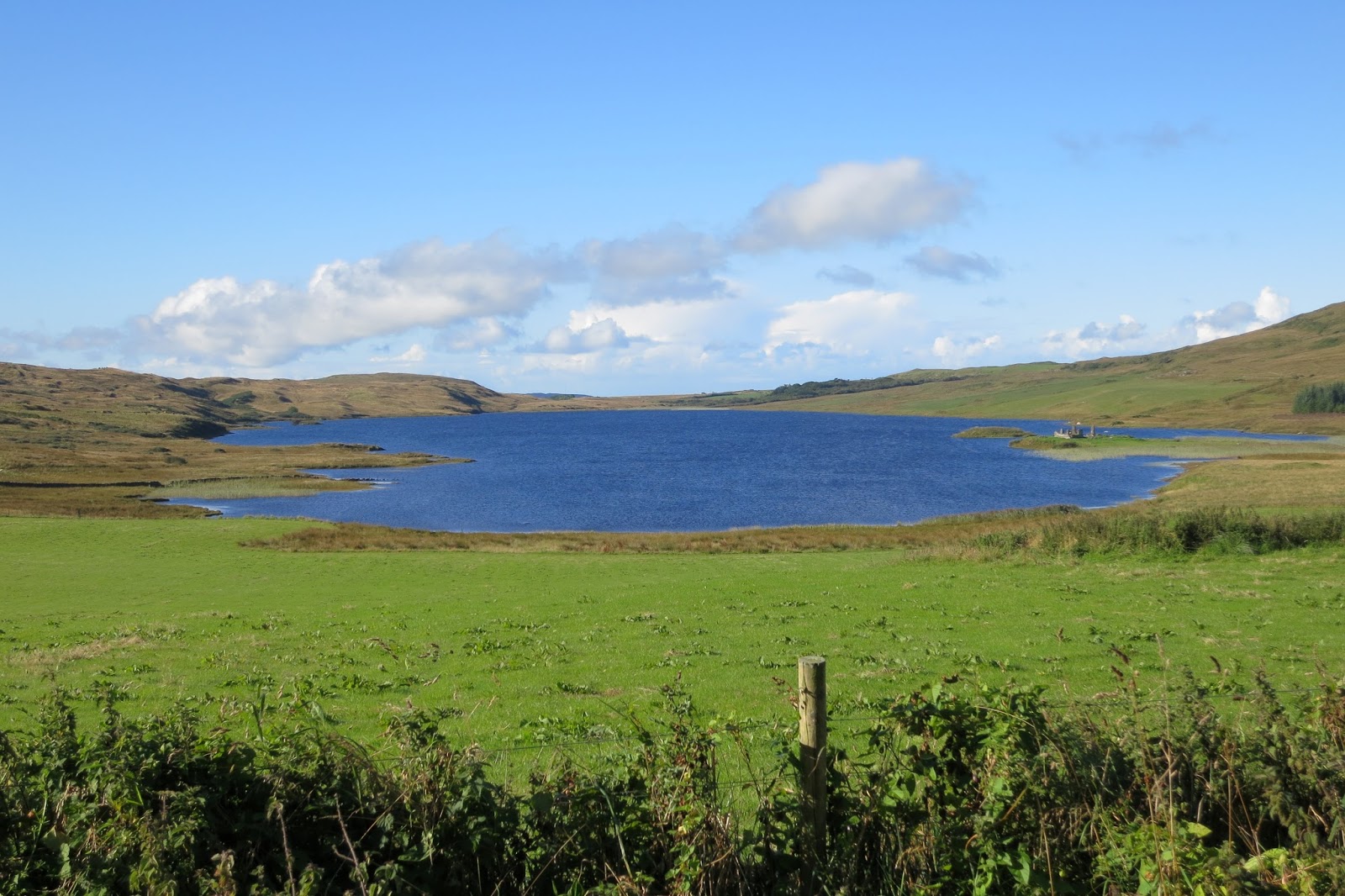 The castle itself is built out on a small island close to the lakeshore. While in ruins now, I can imagine that it was a much more impressive sight hundreds of years ago. 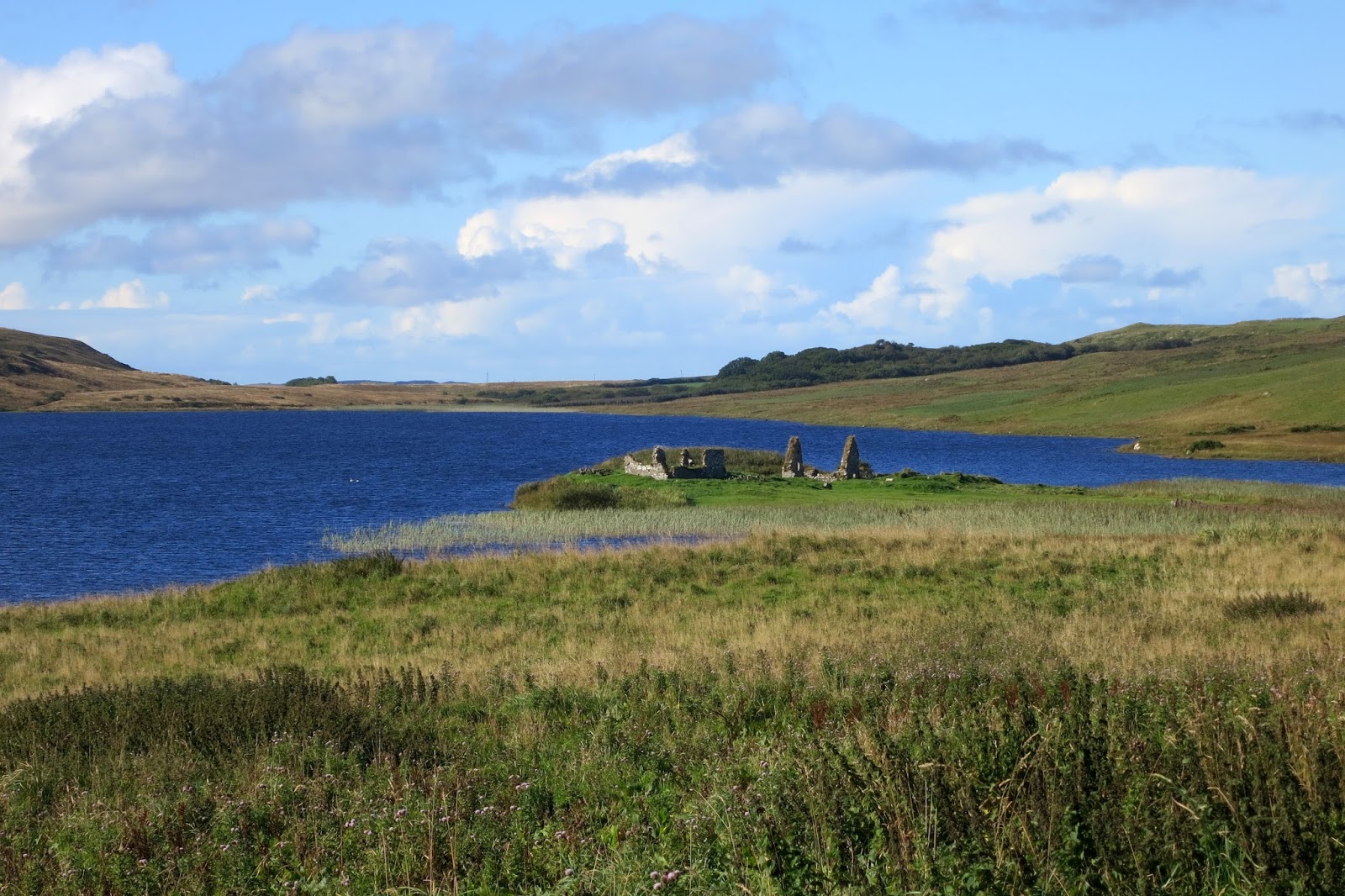 I wandered down to the visitor's center, which was closed, and then proceeded back down the road. While the air was still relatively cool and the breeze made it a bit nippy, walking in the bright summer sun felt absolutely divine. 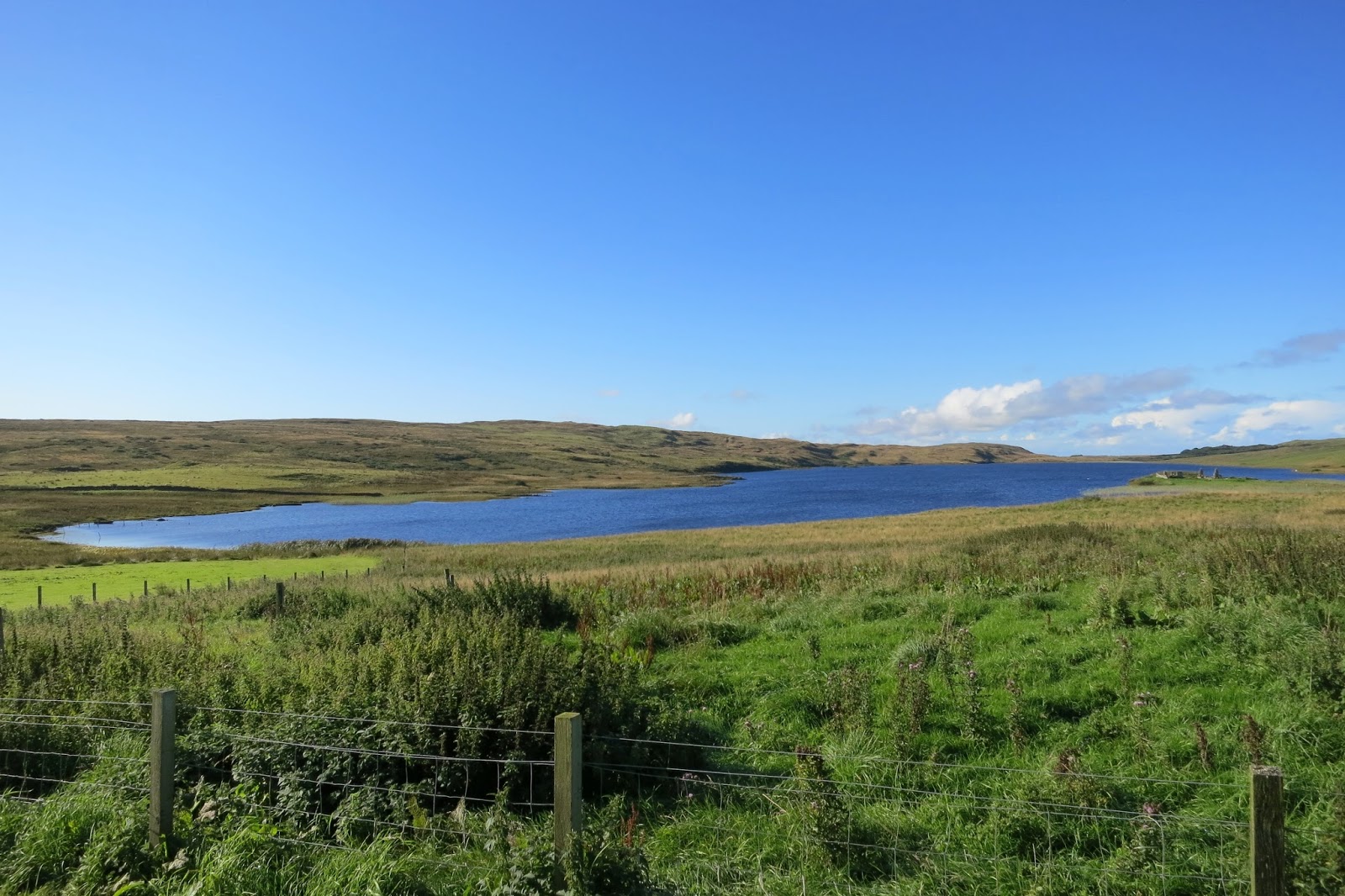 After getting back to the Ballygrant Inn and collecting my bike, I rode out the few miles to Caol Ila. The distillery is only a few miles from Port Askaig, on a small bay looking out across the Sound of Islay to Jura. 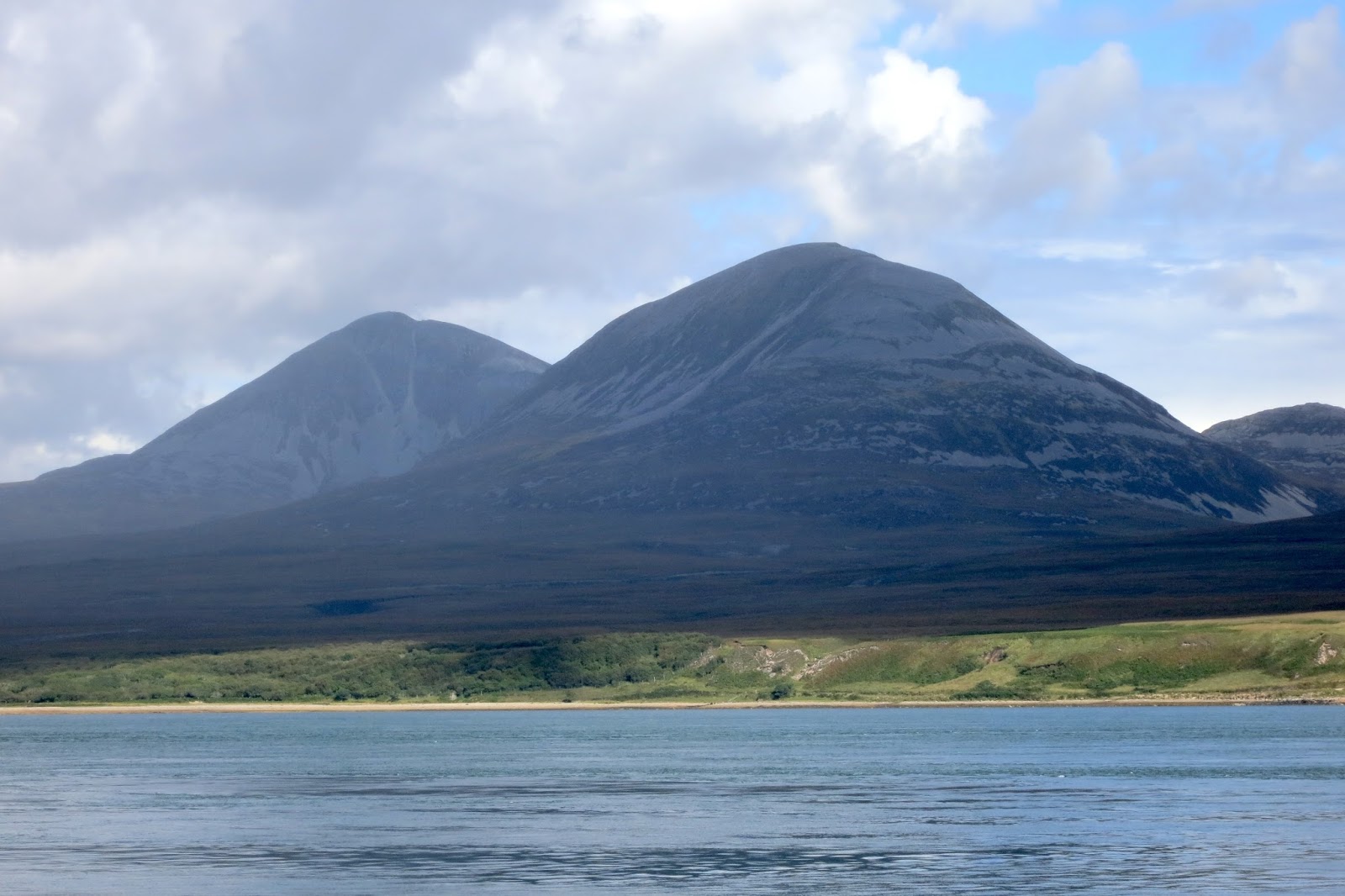 The weather started to get a bit dicey, so it was a nice time to slip inside the visitor's center. Unfortunately the distillery was undergoing a refurbishment while I was on Islay, so I was unable to get a proper tour. However, it was interesting to see the stills in the process of being rebuilt. It's unsurprising that the place needs some work, as their production has roughly doubled in the last ten years, going from 3.5 million liters in 2002 to 6.5 million last year. This is a huge amount of spirit, but the demands of Johnnie Walker are never-ending. 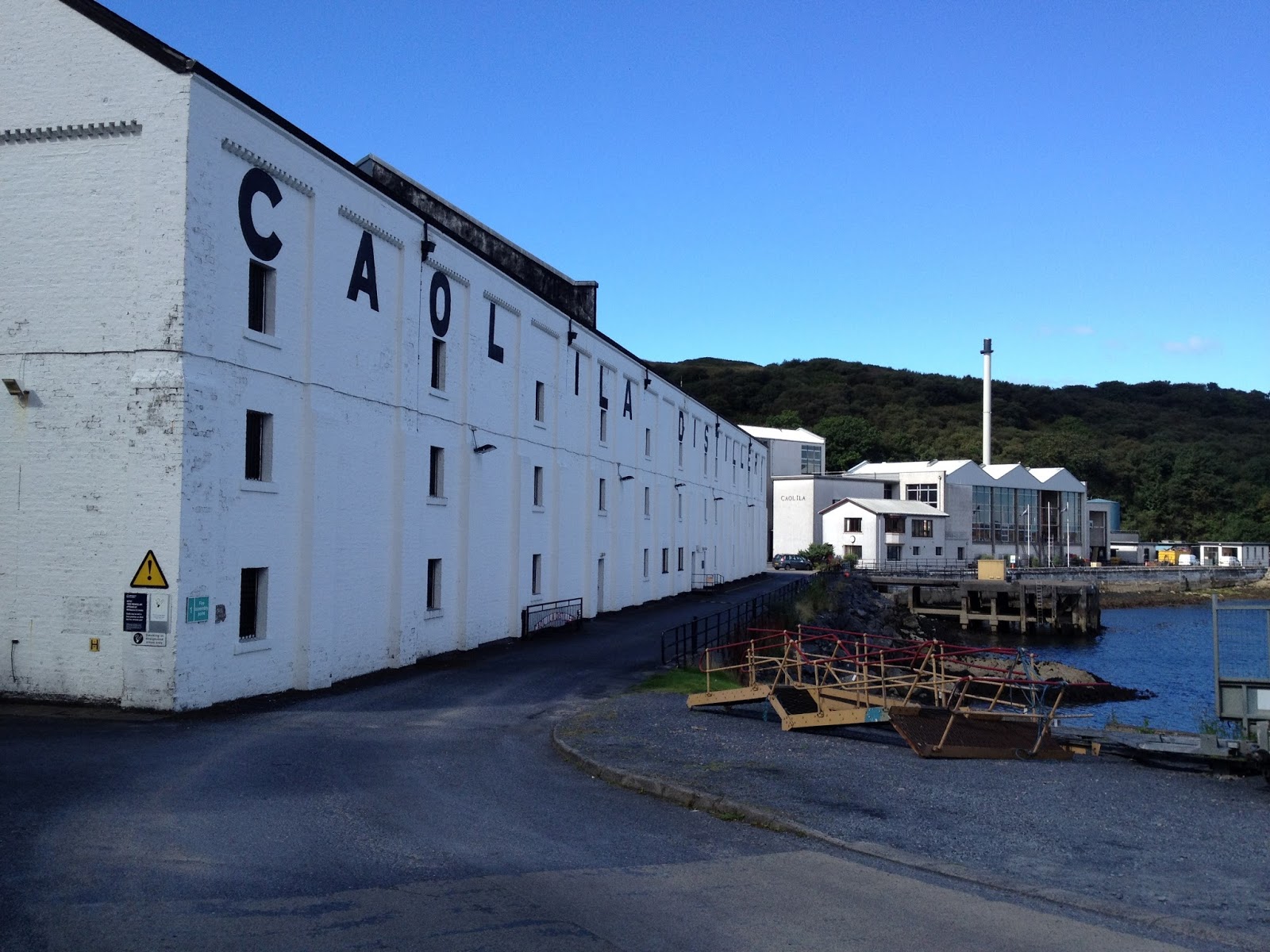 I was, however, able to try some of their whisky in one of the old warehouses (most of their spirit is shipped by tanker truck to the mainland for filling and aging). The Premium Tasting included their standard 12, 18, and 25 Year expressions along with the new make spirit, an Unpeated release (14 Year, I think?), and a very special sherry cask. I can't give you detailed tasting notes, just general impressions. The new make was very piney, with hints of peat and plastic. While not as bad as Bowmore's, it wasn't particularly enjoyable. The 12 Year was basically the same as I remembered it. The 18 Year was an improvement, but it was hard for me to find much more in it. Thankfully I'll get to retry it under less hurried circumstances soon, as I bought a Caol Ila Collection, which contains a small bottle of the 18 Year in it. The 25 Year was up next, but again, it just didn't quite tickle my fancy. The unpeated Caol Ila tasted like it was from first-fill ex-bourbon casks. It was alright, but tasted mostly like a very smooth barrel proof bourbon. Not bad, just slightly unremarkable.

The last up was a 24 year old first-fill sherry cask with a very strange story. If I remember it correctly, the cask was found in a corner of one of the warehouses where whisky destined for the Bell's blend are kept. There were no records of the cask, which was highly suspect as the regulations surrounding alcohol are very tight. This led to a suspicion that the warehouse staff had been attempting to steal it back in the late 1980s, but chickened out. Thankfully the staff at Caol Ila were able to get it shipped back to the distillery. The Premium Tasting is the only way anyone gets to try it - none of the cask will be bottled and when it's gone, it's gone. I've never tried anything else like it. Again, I don't have precise notes, but I was struck by how well the distillery character still shown through the sherry. After my tasting at Ardbeg, it was clear how much first-fill casks can overwhelm even very peated whisky, so it was a pleasant surprise to find that this one was very balanced. The sherry had taken up more of a savory mode, rather than being a fruit bomb. This worked very well with Caol Ila's herbal smoke, planting it in the same league as the 1983/2012 Duncan Taylor I tried last year.

After the tasting wrapped up, it was time to pack up and head back to Ballygrant. The climb back up to the main road was a bit rough, especially because it was starting to periodically rain again, but I didn't mind too much. I took it easy for the rest of the day and went to bed early, because I had a long, strange day ahead of me.
Posted by Jordan at 7:43 AM