Continuing my rhum agricole kick, this is the first of two reviews I'm going to be doing of aged rhums from the Saint James distillery on the French island of Martinique.

Saint James is the oldest distillery on the island in continuous operation. While rhum production goes back even further, the brand came out of a decision by Louis XV in 1763 to allow rhum from the island to be exported. The Saint James brand was established in 1765 near the town of Saint Pierre, with the name designed to appeal to English-speaking colonists in New England. Saint James is also distinguished by having put out the first vintage rhum on the island in 1885, which has continued ever since. Disaster struck in 1902 when Mount Pelée erupted, destroying Saint Pierre and most of the distillery's building. However, the main house largely survived. The distillery was consolidated on the other side of the island in the town of Saint Marie in 1974, where production has been located ever since.

The sugar cane harvest for Saint James begins in February and extends into summer. The cut cane is transported to the distillery as quickly as possible, where it is pressed in mills to extract the juice. The juice, or 'vessou', ferments naturally due to the yeast present in the cane. Fermentation is kept between 25-30º C and is fairly quick, taking only a day or two. The mash is at 4-5% alcohol when it is added to the column stills, which give a raw spirit of 65-74% alcohol. The fresh rhum is then either rested in steel vats for a few months to produce blanc rhum or aged in oak barrels to produce everything from their paille rhum to rhum vieux. Saint James has a fairly high angels share of 8% a year, which goes a long way towards explaining their prices.

Taste: dry cane up front, which becomes a bit sweeter and creamier mid-palate, a huge blast of pepper, a bit of oak and dry cacao near the back, which all smoothes out with time. After dilution, it becomes thinner, but sweeter and creamier, with lighter pepper and the addition of nutmeg and more cacao.

This was the first rhum agricole I ever bought, largely because it was the only one available in Oregon at the time. My first taste was... not good... as the strong and somewhat harsh flavors were just too much for me to handle. So it got relegated to the back of my liquor stash. I've slowly worked through the bottle, with an experiment here and there, but now that I have a better appreciation for rhums, I've returned to find it a rather tasty dram.

Saint James Royal Ambré holds a position between the lightly aged Élevé Sous Bois and Paille rhums from various distilleries, which tend to be aged for about twelve months, and the VSOP and Vieux rhums, which tend to be aged for four to five years. Royal Ambré is aged for eighteen to twenty-four months, which is long enough to add quite a bit of oak-derived flavors while leaving the grassy, funky vegetal flavors of raw cane undimmed. The rhum is bottled at a very reasonable 45%, which gives it heft without making it quite as strong and ethereal as its 50% ABV brethren. Most notably, Royal Ambré is the only AOC rhum agricole I've seen in the States going for under $25 for a 750 mL bottle, which makes it an exceptionally good value. The closest I can find in the same range would be La Favorite Ambre, but it's a bit more expensive, younger, and requires committing to an entire liter bottle. If you're looking for a rhum, especially for making tiki drinks, Saint James is a pretty easy choice. 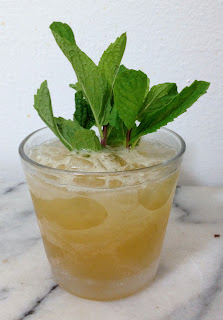 Combine all ingredients, shake with ice, then pour unstrained into a double rocks glass. Fill with crushed ice and add a sprig of mint for garnish.

The mint garnish dominates the nose, though some funk from the Jamaican rum also makes itself known. The sip begins with moderate orgeat and orange liqueur sweetness. But soon enough its time for the funk, with the Jamaican rum and rhum agricole tag teaming your taste buds. With time, the mint begins to infuse the drink, coming in around mid-palate, adding its herbal notes to the funky r(h)um esters.

This mai tai is a kick in the face - but in a good way. It is almost exactly the mai tai you'll get from Blair Reynolds' new tiki bar, Hale Pele. I tried one back on opening night and found it brash but delicious. While Smith & Cross is likely to be more attention-grabbing, the Saint James rhum is almost as important. I feel like it's the only rhum that's bold enough to stand up to all that unadulterated Jamaican funk. However, adding a little bit of extra orgeat seems to be important to both mellow and integrate the rough 'n ready flavors of r(h)ums, transforming them into something absolutely exquisite. This is stiff competition for the best mai tai I've ever had.
Posted by Jordan at 10:36 AM