Next up in the series of Mount Gay rum reviews - their former mid-range Sugar Cane rum. Despite the name, this is a rum made from molasses, rather than cane juice like a rhum agricole. That it still manages to taste like a cane juice rum has to be chalked up to the skills of Mount Gay's Master Blender, Jerry Edwards. He is another chemist-turned master blender along with Joy Spence of Appleton and Billy Walker of BenRiach - maybe there'll be another career in my future yet. But to come back around, this is quite an accomplishment as Mount Gay exclusively uses ex-bourbon barrels from Jim Beam, which means that this variety in flavors is purely the result of distillation, aging, and blending.

Taste: sweet cane juice up front, grassy vanilla, a brief bit of black pepper and oak, then it glides off the tongue into the finish

It still amazes me that this rum manages to contain distinctly agricole-style flavors of grass and cane juice. With that said, it is manages to effectively straddle the two worlds, retaining the molasses and strong vanilla of the other side. The rum is bottled at a standard 40%, helping to make it a rather mellow sipper. Sadly, this fantastic mid-range rum has been discontinued, as Mt. Gay has consolidated their product line. Hopefully they will bring it back, as it fills in the space between the aged version of Eclipse and Extra Old. If I had my druthers, they would bring it back with a higher bottling proof to more directly compete with agricoles (which are regularly bottled between 45% and 50%), but that's just wishful thinking. For now I'll have to enjoy what's left of my bottle. 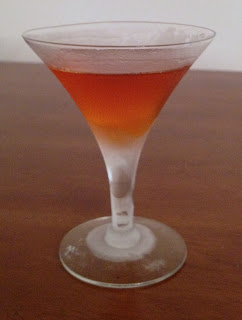 The nose is sweet molasses inflected with orange creamsicle, grapefruit, and subtle herbs. The sip begins with mounting orange sweetness, which is joined by herbal notes from the Bénédictine, rum, and spices from the Angostura. The finish leads with sharp grapefruit notes, which recede to vanilla sweetness.

This drink is a bit of a wild ride. It begins sweetly, swaps to herbal and spicy bitterness, jumps to a burst of bitter grapefruit, then goes out sweetly again. As a note, the flavors will become a bit more integrated if you let the drink warm up. I wanted to make something that would emphasize the grassy character of the rum while bringing in a bit of fruit. The Bénédictine worked well and didn't overwhelm the drink, letting the rum shine as well.

Tomorrow we'll finish off with the second oldest rum Mount Gay offers, their Extra Old expression.
Posted by Jordan at 8:11 AM