Last up in my series reviewing Mount Gay rums - their nearly top-of-the-line Extra Old (XO) expression. While I've reviewed Mt. Gay XO before, I was interested in revisiting it to see if my perceptions had changed over the last few years.

Mount Gay ferments their molasses mash for a fairly long 72 hours, to give an ABV between 6-7%. As noted, they distill in both pot and column stills, the output of which is barreled and aged separately. Mount Gay refills their ex-Jim Beam bourbon barrels three times before discarding them. XO in the United States doesn't have an age statement, but as best I can figure out is put together from a blend of rums aged from 8-17 years with an average around 10 years old, which is then diluted and bottled at 43% ABV. A minus is that Mount Gay chill filters all of their rums. While this is somewhat understandable given the lower bottling proof, as a 'premium' product, I'd really like to see them follow the trend in scotch whisky for higher bottling proofs and no chill filtration. That would help them stand out from the pack more than the fancy new bottles.

Nose: smooth, mild molasses and maple syrup, ripe tropical fruits, a hint of cherry/raspberry/blackberry, gently woody oak, a bit of vanilla. After dilution it becomes mellower and lighter, with the sweetness shifting towards brown sugar and the fruit retaining its heft.

Taste: opens with strong sugary sweetness and black pepper, becomes buttery molasses and oak, with the pepper diminishing into bitter oak and residual sugar. After dilution, syrupy sweetness dominates, with the other flavors becoming accents rather than coming in distinct phases, with emerging fruit and still strong pepper.

While Mt. Gay XO bumps up the standard bottling proof from their lower-tier rum to 43%, you'd be hard pressed to notice the extra alcohol while drinking it. This is an incredibly smooth sipping rum, with the buttery diacetyl element helping to smooth everything out. I was pretty close the first time I reviewed this rum, catching most of the major features - molasses, butter and black pepper. Time and experience have revealed some nice fruit and vanilla notes and let me experience the structure of the experience more finely, but the overall structure is still there. Admittedly, the rum may have lost something in being open for two years, but there's definitely nothing off about it.

As I noted in my original post, MGXO also makes a wickedly good cocktail. This time I decided to go a different route, with a more savory drink instead of the standard daiquiri. 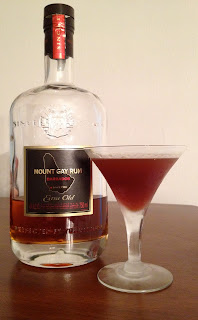 This cocktail is a modification of the classic Japanese cocktail. I'm actually pretty impressed with how well the rum held up. Sherry, orgeat, and Angostura bitters are all pretty potent ingredients, but the rum wove its way through the whole drink. The other elements modified rather than obliterated the rum's flavors.


Overall I think Mt. Gay has a really good set of rums. Eclipse is a rather good value and a solid starting point if you're just getting into rum. If you can find it, Sugar Cane rum is a quirky rum that won't set you back to much money. And XO is decadent, though flirting with being over-oaked. I do wish they had stuck with their old bottles, which were much more distinctive, rather than the squarish new ones that scream marketing department. However, as long as what's inside is good, I won't worry too much about the packaging.
Posted by Jordan at 8:19 AM