While I've mentioned Lustau sherry once before, I didn't get to talk much about this particular class of fortified wines.

Much maligned due to a lack of understanding of how best to store, serve and drink it, sherry is slowly regaining the profile that it deserves. The English word sherry is a corruption of the Spanish region of Jerez, where all sherry is produced. It shares similarities with port, in that both are fortified with neutral grape spirits during the aging process. There are a number of different styles of sherry that vary both in terms sweetness, ranging from bone dry to sticky sweet, and oxidation, from fresher finos to old olorosos. While sherries are naturally dry due to complete consumption of the natural sugars, some will be mixed with sweeter wine varieties such as Pedro Ximénez or Moscatel to produce sweet sherries. All sherries are aged in barrels under a natural layer of yeast that prevents oxygen from contacting the aging sherry. For the flor to survive, the sherry must be between 14.5% and 16% alcohol. Below that percentage, the flor will not properly form. Above, the yeast die and the sherry will start to oxidize. Some sherries, such as finos and manzanillas, are aged entirely under the flor. Others such as amontillados and olorosos will be fortified above 16% alcohol to kill the flor and allow oxidation. Sherry it traditionally aged in the solera system. A set of barrels is established and transitions occur at regular intervals. Finished product is withdrawn from the oldest barrels and refills from the next oldest. This proceeds up to the newest barrels, which are filled with new product. This means that there is always some of the old sherry left in the barrel, which continues to be aged and mixed.

Lustau East India Solera sherry is designed to replicate an accidental product. Sherries were shipped around Africa to India where the barrels experienced a wide range of temperatures in a humid environment. It was found that this developed an extraordinary smoothness and complexity. Lustau replicates these conditions by aging the sherry in warehouses which are kept very humid and where the temperatures are allowed to vary widely. This sherry is a blend of oloroso (85%) and PX (15%) wines aged betwen 15 and 50 years.

On the nose, this sherry is full of raisins tinged with walnuts and almonds. The taste, while distinctly sweet, is not cloying and finishes with more raisins, nuts and a touch of chocolate. This is a fantastic dessert wine that would work well in a lot of the same places as a tawny port. Additionally, as it has already been aged for decades and has a relatively high (20%) alcohol and sugar content for a sherry, it should last a while in the fridge.

While perfectly good by itself, I wanted to play around a bit and see what I could do with it in a cocktail. 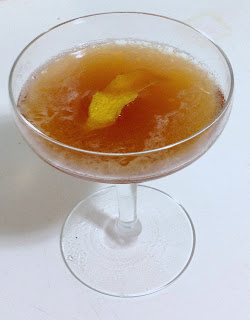 Combine all ingredients, shake with ice and strain into a chilled cocktail glass. Squeeze a twist of lemon of the top and drop into the drink.

While basically a twist on a whiskey sour, I was pretty pleased with how this drink turned out. While the sherry plays a supporting rather than leading role in this drink, it is an essential component. As I noted above, this sherry has Pedro Ximénez grapes in its mix, which give it quite a bit of sweetness. The nose is full of lemon oil, grain from the whiskey, spices from the syrup and bitters, with just a hit of raisin from the sherry. The taste is wonderfully layered, with the whiskey and sherry dancing around each other, bolstered by the sourness of the lemon juice and snappiness of the bitters. The bitters also help to bring out a bit of the nuttiness in the whiskey and sherry. You're going to want a rather stiff whiskey here. I've tried a few different types including Russell's Reserve Rye and Old Grand-Dad 114. I like it a bit better with rye whiskey as the bold, spicy flavors of rye stand out more than bourbon does. Rittenhouse Rye would be an obvious choice, but something like the 110-proof Willett 4-Year Rye would probably be absolutely perfect.
Posted by Jordan at 10:30 PM