It's been far too long since I got in on a Mixology Monday event. This week's theme, hosted by Jacob Grier at the Liquidity Preference, is Retro Redemption. Roughly from the 60s through the 90s were a dark time for cocktails. The pre-Prohibition Golden Age was long gone and the tiki era had faded. Preferences were shifting towards wine and beer, with vodka being the one spirit that retained much sway. The cocktails that did emerge during the late 20th century tended to be dilute and fruity, hiding rather than showcasing their alcohol. As we emerge back into the light of fine drinks, many want to shun that era and consign all of its creations to the dustbin of history.

But this week we are attempting to resurrect these Frankenstein creations, either showing that they have value in their natural state of tweaking them into more pleasant concoctions. Having been born only near the end of that time period and only begun my journey down the path of true mixology after the turn of the millennium, I can't lay claim to having experienced any of these creations in their natural state. Sure, I've had a Lemon Drop or two before, but these days I mostly drink at places where I can expect a well made cocktail or at least a healthy pour of whisk(e)y.

So stepping off into the unknown, I paged through my copy of the Joy of Mixology, looking to see what might have managed to slip into its hallowed pages. As it is primarily aimed at current or perspective bartenders, there are some slightly dubious creations that might be called for by less discriminating customers. Such as the Long Island Iced Tea.

Rightly infamous, the original recipe calls for a brain-busting 4 ounces of hard spirits as well as another ounce of liqueur. But this potent punch is well hidden among the strong flavors of lemon juice, simple syrup and cola. While not known for being the most refined drink, it is certainly a more pleasant way to get smashed than, say, drinking straight grain alcohol. But I wondered if this excuse to turn bottom-shelf liquor into money and dubious decisions could be reworked into something a bit more mixologically sound.

Combine all ingredients, shake with ice strain into a glass filled with ice and top with cola.

From this starting point, I wanted to make a drink that would put the spirits a little more front and center while retaining a similar flavor profile and hue. And, you know, not quite so large. Some days it's nice to not knock yourself over. 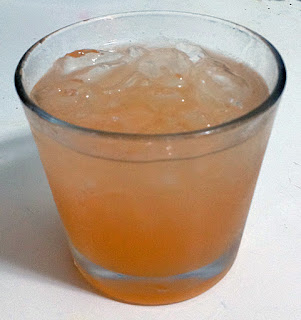 The Isle of Seven Cities
0.5 oz vodka
0.5 oz aged light rum
0.5 oz reposado tequila
0.5 oz gin
0.5 oz orange liqueur
0.5 oz lemon juice
0.25 oz simple syrup
1 barspoon orgeat syrup
1 dash Angostura bitters
1 oz soda water
Build over ice in a chilled glass and briefly stir to combine all ingredients.
For some reason, this made me think of Antillia, the Island of Seven Cities that explores combed the Atlantic ocean for during the Age of Discovery. Some of it is the diverse ingredients, coming from just about every continent on earth. I had to make due with what was already in my liquor cabinet, which is, admittedly, a fair bit. I drew some inspiration for this variation from a couple of tiki drinks, namely the Fog Cutter and the Scorpion. Both of these drinks incorporate rum and gin, which are not an obvious combination. However, when made well they are both absolutely brilliant.
For the vodka, I only had one choice: Medoyeff. While it's admittedly playing a supporting role in this case, I will say good things about it. My bottle comes from when it was still made by House Spirits, but the label has since migrated with the eponymous Lee Medoff to the Bull Run Distillery. While it's made to be drunk straight in the Eastern European fashion, it was on hand and fulfilled its duty to buck up the alcoholic content of this drink without crowding out the other flavors. The aged light rum was Banks 5 Island (part of the spark for the name of this drink), a particularly robust and flavorful light rum. I decided to go with reposado instead of blanco tequila to mellow that aspect of the drink just a bit and keep it from overwhelming the other flavors. I'm quite partial to Corralejo reposado and it is very close to a blanco in appearance, having only a very light straw color. The gin was Hendrick's, which is a very gentle gin that plays well with others and provides a number of very nice floral notes to the drink. The orgeat was also inspired by the Fog Cutter and Scorpion, where it helps to tame the strong flavors of those drinks.

The sip leads you through the various layers of flavor rather than dissolving into an ill-defined gimmish. The gin and rum lead the charge, the juniper snap of the gin and the hogo of the rum joining forces. This is followed by the agave notes of the tequila that segue back into the more floral notes of the gin. The spices from the Angostura bitters fill the role that the cola would otherwise play and the fruitiness of the orange-kumquat liqueur and the subtle nuttiness of the orgeat round out the experience. Behind all of this, the lemon juice helps to give the drink some backbone and the soda water leavens the experience. While probably diverging from the drink's roots, you could still squint in its general direction and imagine that there's some tea in there, so I feel like I haven't strayed too far. This is a drink that I would happily sip year-round.
Posted by Jordan at 10:06 PM