The Highland Park distillery is currently the most northernly scotch whisky distillery, located on the Island of Orkney. Despite the name, this distillery is technically not part of the Highland scotch whisky region, instead being included in the loosely defined 'Islands' region off the Highland coast. The distillery also has the distinction of being one of the few distilleries to malt and dry its own barley, with an extra twist coming from the addition of heather to the locally cut peat that is used to fire the drying kilns. Last, but not least, their whisky is aged exclusively in used sherry barrels, which are either American or European oak and either first-fill or refill casks. This fact is highly touted in their product information, going so far as to claim that sherry casks are inherently superior to ex-bourbon casks. While I can agree that there are virtues to using ex-sherry barrels for aging, there are plenty of excellent whiskies out there that have never touched anything but used bourbon barrels. The Glenmorangie Original expression is an excellent example of what bourbon barrel aging can do for single malts. But really, that's my only complaint about Highland Park and could be easily remedied by reigning in the marketing department a bit. One last interesting note is that the American bottlings of Highland Park's 12- and 15-Year expressions are at 43% alcohol whereas the European bottlings are at only 40%, which probably helps to dial up the flavors of the American versions just a hair. 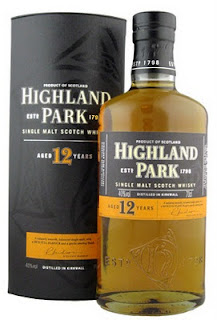 Highland Park 12-Year
Nose: Sweet sherry, smoky peat, a touch of vanilla, cacao and nuts. With a bit of water the sherry moves forward and transforms into more of a dry Oloroso style while the peat becomes more vegetal.
Taste: Big honey and juicy raisins up front, shifting through creamy pepper and chili mid-palate. With water, the upfront sweetness is slightly toned down, followed with orgeat, spice and some dry bourbon notes.
Finish: Drying, with dueling sherry and barbecued peat initially, with a touch of seawater at the very end. This is transformed into creamy unsweetened chocolate, coffee and gentle peat after the addition of a bit of water.
This is in my opinion a 'must-have' single malt. It's regularly in the low-$40 range and is only $36 in Oregon until the end of January. For being on the younger side, this whisky brings an incredible range of flavors that shift dramatically from the nose to the palate through the finish. The stark contrast between the explosive honey sweetness at the beginning of the sip and the intensely drying finish is delightfully shocking. Before drinking this scotch, I was generally under the impression that I didn't like peated whisky. This is one of the more lightly peated single malts out there and is thus a great way to ease into that aspect of scotch whisky. The smoke compliments the other flavors extremely well and doesn't dominate any part of the experience, especially after adding a few drops of water. Highland Park has been described as bringing in a little bit of flavor from each of the other scotch whisky regions and I would say that's a fair encapsulation. It's a multipurpose dram, being enjoyable whether you just want something to sip with company or if you want to sit and spend time thinking about all of the different flavors drifting across your palate.
I'm really looking forward to trying the older Highland Park expressions as their youngest offering speaks extremely well of their skill in all aspects of whisky production.
Posted by Jordan at 3:45 PM