Much like Barbados rums, Guyanese rums are another one of the quintessential varieties of rum. Also known as Demerara rum after one of the country's main rivers, all of this delightful nectar is produced by one company, Demerara Distillers Limited (DDL). Though there were previously hundreds of different distillers connected with the various sugar plantations, they have consolidated over the years. Guyanese rum gained early fame as it was one of the primary varieties that were sourced to make the British Navy's rum blend.

One of the features that makes Demerara rums unique is the variety of stills that are used in their production. Each still has its own code, which is usually the name of the sugar estate that the still originally came from. The wooden stills are the most famous as they are the last of their kind on earth. The two links above can give more detail than I could ever hope to get out here and are an absolute treasure trove for anyone who wants to know more about the fascinating capabilities available to DDL.

Demerara rums are known for having particularly heavy, molasses-driven flavors. Two prime examples of this are the flagship offerings from DDL, the El Dorado 12-Year and 15-Year rum. 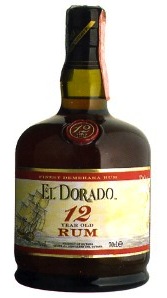 Working off of Sascha's eminently helpful diagram, ED12 is made up primarily of rum from Diamond (SVW), one of the two-column metal Coffey stills as well as the Enmore (EHP) wooden Coffey still. As with all of El Dorado's offerings, the 12-Year indicates the age of the youngest rum in the blend.

This rum is one of the best values out there. Incredibly rich for its age, this rum can be found for as little as $25 (take that, single malt scotch!). There's probably a lot more to find in this rum, but as the weather changes as my nose gets a bit stuffy, the main notes are most of what I can find right now. But even if that's all you get out of it, this is still a fantastic, delicious dram.

ED12 also works really well in a cocktail. However, it has to be used careful because its flavors can easily dominate the drink. Balance is important, especially in tiki drinks with over half a dozen different ingredients. 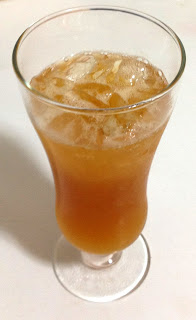 Combine all ingredients, add a small handful of cracked ice and blend for five second. Pour into a chilled glass with more cracked ice.

This is a very rum-centric drink. The syrups add complexity and flavor, but mostly peek around the edges rather than being front and center. I like to make this one with a 2:1 split of ED12 to ED5, just to lighten the drink a bit. For the aged Jamaican, the Bum recommends Appleton 12 year and I heartily concur. It adds just the right amount of funk to the drink. The ED12 forms the backbone of the drink and all of the other flavors orbit around it. The fruitiness adds a good amount of zip to the drink and the lime's sourness is perfectly balanced by the honey's sweetness. A cursory web search suggests that this isn't one of the more popular drinks from Sippin' Safari, but I feel like it deserves a bit more recognition. This is an eminently sippable drink, but it does require top-notch ingredients. 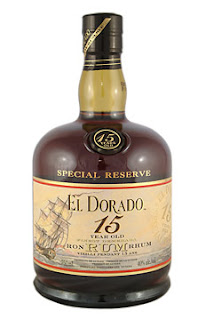 Again going back to Sascha's work, this rum is composed of spirits from the Port Mourant (PM) wooden double pot still and SVW as well as EHP and Versailles (VSG), the single wooden pot still. These rums are then aged for at least 15 years and blended together.

Taste - oak and molasses still dominate, while dry cacao and mocha flavors can also be found


Personally, I have to agree with Capn Jimbo that this rum is just about overdone. For me it has spent just a little bit too much time in the barrels. The oak flavor is a little too assertive for my taste and I think this would be a better rum if that influence waned. If you happen to like oak, you'll probably enjoy this rum a bit more than the 12 Year, but for me it's hard to justify the extra $10 on the price tag. It's an interesting experience, but at the end of the day I'd rather be drinking the 12-Year.
Posted by Jordan at 10:09 PM